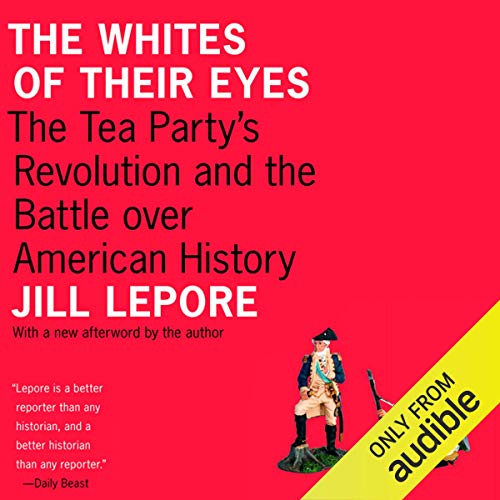 The Whites of Their Eyes

The Tea Party's Revolution and the Battle Over American History
By: Jill Lepore
Narrated by: Emily Zeller
Length: 5 hrs and 30 mins
Categories: History, American
3 out of 5 stars 3.0 (2 ratings)

The Whites of Their Eyes

Americans have always put the past to political ends. The Union laid claim to the Revolution - so did the Confederacy. Civil rights leaders said they were the true sons of liberty - so did Southern segregationists. This book tells the story of the centuries-long struggle over the meaning of the nation's founding, including the battle waged by the Tea Party, Glenn Beck, Sarah Palin, and evangelical Christians to "take back America".

Jill Lepore, Harvard historian and New Yorker staff writer, offers a wry and bemused look at American history according to the far right, from the "rant heard round the world", which launched the Tea Party, to the Texas School Board's adoption of a social-studies curriculum that teaches that the United States was established as a Christian nation. Along the way, she provides rare insight into the 18th-century struggle for independence - the real one, that is. Lepore traces the roots of the far right's reactionary history to the bicentennial in the 1970s, when no one could agree on what story a divided nation should tell about its unruly beginnings.

Behind the Tea Party's Revolution, she argues, lies a nostalgic and even heartbreaking yearning for an imagined past - a time less troubled by ambiguity, strife, and uncertainty - a yearning for an America that never was. The Whites of Their Eyes reveals that the far right has embraced a narrative about America's founding that is not only a fable, but is also, finally, a variety of fundamentalism - anti-intellectual, antihistorical, and dangerously antipluralist.

Fantastic, well researched and even handed

Generous even to the insane, idiotic and ignorant. I enjoyed it immensely and found the research thorough and engaging. History for the public at its best