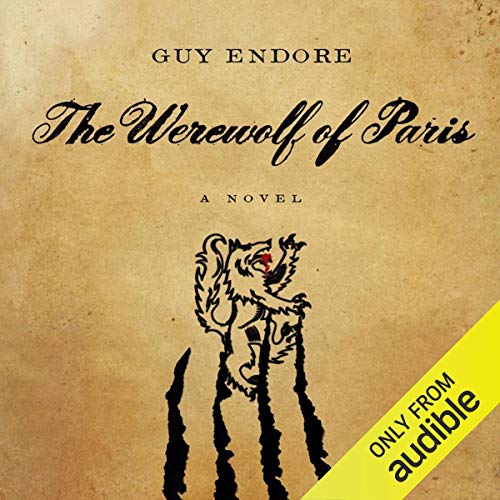 The Werewolf of Paris

The Werewolf of Paris is acclaimed American author Guy Endore’s classic historical horror novel from 1933 that stealthily follows werewolf Bertrand Caillet - who was conceived when his teen mother was raped by a priest - as the beast navigates the rough-and-tumble streets of Paris during Franco-Prussian War.

Narrated in coolly ominous tones by Jean Brassard, this dark and often twisted morality tale is a literary classic and ranks right up there with Mary Shelley’s Frankenstein as an elite of gothic fiction.

Endore's classic werewolf novel - now back in print for the first time in over forty years - helped define a genre and set a new standard in horror fiction. The werewolf is one of the great iconic figures of horror in folklore, legend, film, and literature. And connoisseurs of horror fiction know that The Werewolf of Paris is a cornerstone work, a masterpiece of the genre that deservedly ranks with Mary Shelley's Frankenstein, Bram Stoker's Dracula, and Robert Louis Stevenson's The Strange Case of Dr. Jekyll and Mr. Hyde. Endore's classic novel has not only withstood the test of time since it was first published in 1933, but it boldly used and portrayed elements of sexual compulsion in ways that had never been seen before, at least not in horror literature.

In this gripping work of historical fiction, Endore's werewolf, an outcast named Bertrand Caillet, travels across pre-Revolutionary France seeking to calm the beast within. Stunning in its sexual frankness and eerie, fog-enshrouded visions, this audiobook was decidedly influential for the generations of horror and science fiction authors who came afterward.

What listeners say about The Werewolf of Paris

I felt that the story was rushed in parts due other sections being far too drawn out. Not a bad listen though

i read somewhere that this book did for werewolves what "dracula" did for vampires. and that's exactly right. moreover, it is a perfect book in so many regards that i am completely baffled why it doesn't rank as a 20th century classic, at least as a twin to "dracula". maybe "the paris werewolf" with an author's name like guy endore -- per'aps pronounzed as in guee encore -- does not sound sufficiently americain? possibly a "loup garou from noo awlins" would have done more to establish the book as an AMERICAN classic. audible does the right thing by telling us that THIS reading can be had "only from audible", but then gives it a confusingly classical packaging that furher distracts possible listeners. shooing them away from the book. the reader//renderer does an excellent job, providing a more-than-5-star production of the story, with some real french inflections, unlike so many american readers whose three words of french or german or yiddish are so much chopped liver, ie, total gobble-dee-gook. oh yes, there does exist some estimation that americans couldn't read a book that has more than a few words in some other language scattered through its pages. the same might be true for british readers, just as german readers would get every single english word wrong, spell it wrong, pronounce it wrong, understand it wrong. that's why this rendition by a master linguist in american english and french is so helpful, so enjoyable to listen to -- comparable, say, to stephen fry's rendition of sherlock holmes. i'm also surprised to see that the book -- as a book -- was published in germany, in a german version -- where it sank without a trace -- although it seems fairly obvious to me that this was the place where patrick süskind got a good deal of his inspiration for his very successful novel "perfume". bram stoker came by his "dracula" via sheridan le fanu's "carmilla" and wilkie collins's "the woman in white" and finally also by way of oscar wilde's helping hand -- so why begrudge süskind his success? but this is the original werewolf classic, an american novel written by an american who spent time enough in france to inject a major shot of strangeness into his story, much the same as the artist who painted "american gothic" did from his sojourn in paris. BTW there are longueurs and meanderings in this book, which i find rather nice in an audio book. the rigid editors of today would have surely jabbed their hedge-trimming tools at these passages, but a faster or shorter version doesn't always necessarily make for a better book. there are two books in english written in the 20th century that i would like to see translated into the viennese dialect of austria -- one being james joyce's "ulysses" --- and the other -- this one.

this is not just a blood and guts werewolf story, though there are some moments. it's much more of a psychological study and a biographical history of an individual that becomes a werewolf, and initially we get his ancestor's story for a stretch before he even comes into the story. it may not be fast paced enough for Twilight crowd but I thought there were some interesting things in it, and it is one of the "original" werewolf stories that laid the foundation for much that came after. with some modernization it could be done very well as a film. & was the basis for the Oliver Reed werewolf film. for being written in 1933 it had some elements that surprised me. it is always interesting to me to find in some old lit tidbits of history or even "pop" culture, for example how early a word or phrase was used that i thought was modern or even how long ago Coke was popular etc. probably not going to be a favorite among the MTV generation

Neither of the two short stories in the first couple of chapters had anything to do with werewolves. The second story started off with a priest taking advantage of a 14 year old girl. While during other years I might have been willing to finish the book, I don't have the energy for that this year in 2020.

the dracula of werewolf? Really, where?

This was 9 hours of long torturous french history jargon, and 2 hours 9 minutes of werewolf story. Really the excess of words was about church, morality, revolution, war and everything eslse but werewolf. The werewolf story appears only as a backdrop to whatever was going on in France at such time. I wanted to DNF half way thru but decided to forge on. Bad decision. The story was all over the place and none of the characters were likeable. The scenes would also veer off topic and at one point i had to go back to catch where the setting had shift anf why. I hate when writers do this, when they rant on from one setting to another without proper transitions taking place. It makes it hard to follow or even understand a particular chapter. There was just so much info dump that when i finished i couldnt remember what i had read. I really dont get the dracula comparison. Dracula, though never taking on his own POV, was about Dracula, and not 10 hours of Transilvania history, morality, revolution or its religion. Anyway, i didnt much care for the narrator either. He wasnt bad but not the best i've listened to either. I recommend this only for those who love long wordy historical fictions about mannerism of a society. For actual werewolf stories look elsewhere.

Searching for the quintessential werewolf novel led me to this book. Reviews lauding it as the Dracula or Frankenstein of werewolf literature are not far off, especially because of its similar multi-narrative structure. The novel explores a young man's coming of age as a werewolf, and its effect on himself, his family, and the community. The book is also a deeply researched history lesson, giving great historical and personal detail about the time surrounding the 1870 Paris Commune. Of course, the monster's acts parallel the military and other human brutality taking place. You get a healthy dose of traditional European werewolf lore as well. Like most great tales of the supernatural, the main narrator is thoroughly logical and skeptical. Will he end up believing? The narrator does a great job with different voices between characters, and his French accent is completely palatable. After having read great the art-history book The Judgement of Paris, by Ross King ( https://www.audible.com/pd/The-Judgment-of-Paris-Audiobook/B002V5CUZU ), I feel like I have about as deep an understanding of this period, and from many differing perspectives, as a 21st Century American layman can get.

Struggled through this story. Did not like it one bit, no action, only one compelling character, and a whole lot of period observations that did not enrich the story.

A horror-tinged look at the Paris Commune

This book really soars when it delineates the everyday horrors of life during a time of incredible social and political upheaval. Werewolves aren't the scariest thing on display.

The Dracula of Werewolves

This story was enjoyable, but so very melancholic. The way the writing goes, thank God for the last chapter and then appendix. Brilliant story.