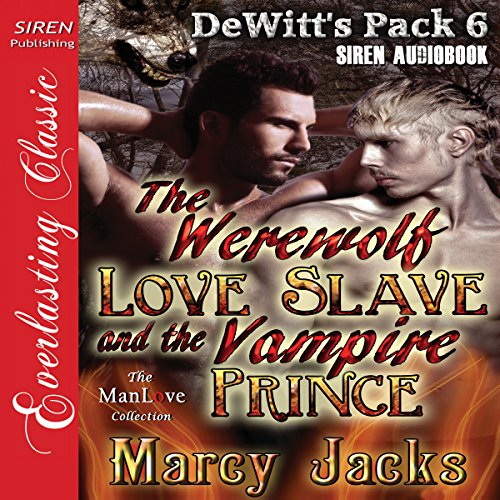 The Werewolf Love Slave and the Vampire Prince

When alpha werewolf Andrew James is captured by a vampire, he's naturally a little peeved at himself, until he's offered freedom in exchange for sex. It doesn't take Andrew long to realize the vampire is his mate, and he's not about to let him go, even if it means abandoning his pack and swearing loyalty to another.

Prince Vladimir Belekoff cannot believe the foolishness of this werewolf. All he wanted was a night of passion, to feel like he mattered before sending the werewolf on his way. Andrew is determined, however, and Vlad can't help the fact that he wants the gorgeous, mysteriously affectionate man to stay. As a fourth son, Vlad is so far down the line for the throne that he almost doesn't count. He is to be married to a wealthy vampire lord, and soon he must choose if his and Andrew's lives are worth risking for something his title could never give him: freedom and love.

Loved it, and too short

I must admit I judged this book by its cover. Im a vampire/ werewolf fanatic and if they are gay, well then I’m on it, except when the book is too short and spending a credit on such a short book is a waste. But, since I was hard up for some vamp/wolf love, I gave it a try to feel out the narrator/author combo. I was sucked in and have to be honest I judged the book too soon. I was impressed with the narrator, he did a fantastic job with the different voices. I liked the story and its plot enough that I decided to tackle the series from book 1 and see how it goes. I recommend this book, although its short.