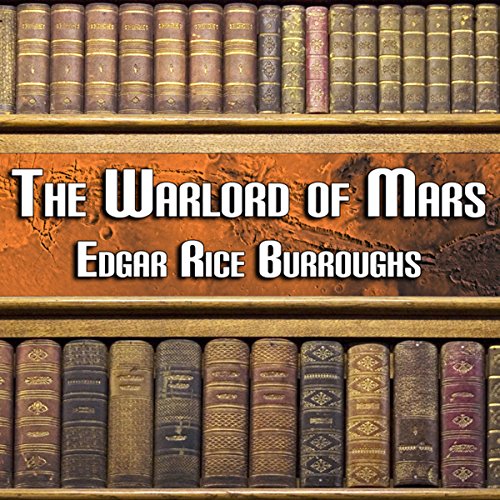 The Warlord of Mars

The Warlord of Mars, by Edgar Rice Burroughs, is the third book in his famous Barsoom series. This novel continues where The Gods of Mars abruptly ended. John Carter's wife, the princess Dejah Thoris, is imprisoned in the Temple of the Sun by the vile pretender goddess Issus. It is said one has to wait an entire Barsoomian year before the room the prisoner is in revolves back to the entrance. John Carter discovers that a First Born knows the secret of the Temple of the Sun, and he and the Holy Hekkador Matai Shang want to rescue the Holy Thern's daughter who is imprisoned with Dejah Thoris and another Barsoomian princess, Thuvia of Ptarth. John Carter follows them in the hope of liberating his beloved wife. His antagonists manage to stay ahead of him and flee to the north, taking the three previously imprisoned women along.
Public Domain (P)2010 Alpha DVD LLC
Classics Adventure Space Opera
Show More Show Less

What listeners say about The Warlord of Mars

I posted my first review ever for _Gods of Mars_ because the Tantor Media narrator was so terrible. I did not think any narrator could be as bad or worse. And then I listened to this book. Delloro's vocal tone makes it seem as if he is shouting through the entire eight hour audio file!! He also cannot pronounce simple words like chasm or stygian let alone the obvious pronunciation of character names, such as Xodar (Zodar not Ex-o-dar). ERB's books are fun, but only a true fan will be able to suffer through this atrocious narrator's work.

an amazing out of this world story ( literally) that enchants the reader with romance, sword fighting, and intense character development with creatures Beyond imagination

I enjoyed this and the first two books, as well as the performance. However, it should be noted that, Peter Delloro's performance is chocked full of mispronounced words. Full. I found it appropriate because, having lived near Virginia, southern people have absolutely no idea how to speak words properly. While this is not true of all Virginians, it is true of most so, the reading kinda fits. Even should a Virginian have a large vocabulary, it is often that they still do not know how to speak them properly. Words such as "stygian" become "st(eye)gian" and "succor" becomes "sue-core" instead of "suckor". So, if you're big on exacting pronunciation, forget about it, Peter Delloro is not ever going to be your guy. However, of all the readers, he sounds a lot like an actual, back water, basackwards, Virginian and not British or television American.
He sounds exactly right, despite being one serious butcher of spoken English. What can I say? It's what Virginians and most southern Americans do.

The naration was atrocious.

What disappointed you about The Warlord of Mars?

The reading lacked style, class and tempering. It was bad in the extreem. I

I wish i could get a refund.

Where does The Warlord of Mars rank among all the audiobooks you’ve listened to so far?

i read the book when i was young and this was a nice listen to that was easer than the read.

What was one of the most memorable moments of The Warlord of Mars?

i likes the battles

Great title for the book, and captures Mr. Carter from Virgina. Again, i think this audiable book would be lost without Peters version of it. Remember to listen to the series in Order or YOU WILL BE LOSSST.

The narrator that can only speak in CAPITALS.

Spend the extra money and get this book narrated by ANYONE ELSE. The book is a five star. The narrator brings that down at least three stars. It's almost like he is trying to do a bad John Wayne impersonation. Very nearly un-listenable.