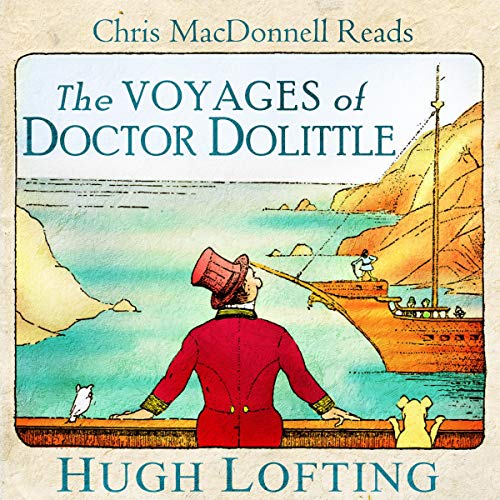 The Voyages of Doctor Dolittle

By: Hugh Lofting
Narrated by: Chris MacDonnell
Try for £0.00

In this follow-up to the first of the series, Lofting assigns the starring role to Tommy Stubbins who is now an "old man". He recalls how he met Doctor John Dolittle and the many adventures they shared. The Doctor is working on learning the language of the Shellfish and their adventures take them from a trial for murder to adventures on the high seas, culminating in their arrival on Spidermonkey Island. Then comes a war between the native tribes, Dolittle being crowned King, the arrival of the Great Glass Sea-Snail and their eventual return to Puddleby-on-the-Marsh.

Tommy's age as the narrator gives the sequel a more mature perspective which is reflected in the writing style and the sophistication of the issues underlying the plot. Dolittle strongly disapproves of Zoos (in the form he knew them). He hates the "sport" of Bullfighting and frowns upon any cruelty to living creatures, human or animal.

This version is read from the original 1922 edition but does contain some changes. In 1998 when the book was reissued, his son, Christopher Lofting acknowledged that "In some of the books there were certain incidents depicted that, in light of today's sensitivities, were considered by some to be disrespectful to ethnic minorities and, therefore, perhaps inappropriate for today's young reader." In this reading the publishers have attempted to address those issues. He also says: "Hugh Lofting would have been appalled at the suggestion that any part of his work could give offense and would have been the first to have made the changes himself."

What listeners say about The Voyages of Doctor Dolittle