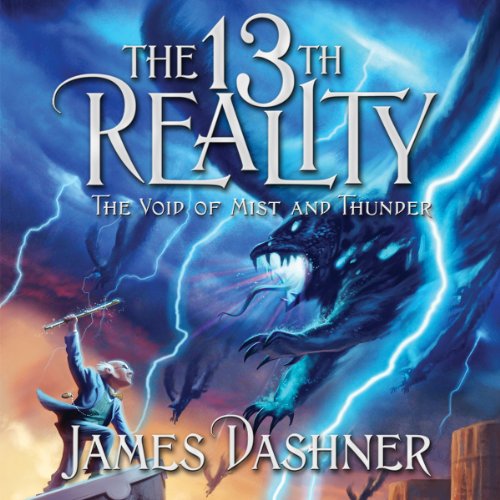 The Void of Mist and Thunder

The Void of Mist and Thunder

Atticus Higginbottom is trapped in the Nonex with his mortal enemy Mistress Jane and the corrupt and powerful Mr. Chu. No one has ever escaped the Nonex before, but for Tick, Jane, or Mr. Chu to have any hope of surviving the dangerous and deadly realm, they will have to work together for the first time in their lives. And they must escape. An all-consuming void has opened up and is unleashing monsters throughout the Realities.

All of reality is unraveling at the seams and Tick's friends and fellow Realitants are facing an epic war that could spell the end of all they hold dear. Master George has one last weapon at his disposal: the mysterious and unpredictable Karma button. And depending on the character of the person who wields it will determine if its unlimited power is used for good or for evil. The Void of Mist and Thunder is the fourth and final book in the 13th Reality series.

For one, if I would have paid attention to the fact that the narrator changed, I would never have bought this final book of the series. It was pretty painful to listen to. The 1st book on Audible that I have been disappointed with.

loved it wish there was anothet book.....totally enjoyed...... this is all that i can think of to say....i enjpyed kept me listening and i finished book quickly....did prefer the reader of first 3 books to the last reader, but that is probably because i had gotten used to his voice....the last reader was good also

This was rather longer than I think It needed to be. The other three books were excellent and the reader for them was MUCH better with the voices. This story had a lot going on and to many side plots. Was not impressed.

author just wanted to end it

this is the best one yet. I was very engrossed in this book. I could not stop listening to it. I could not even sleep because I wanted to see what would happen next. great series.

I miss the old narrator

It's a new narrator from the first three. I'm just used to the old one

While the ending was great and hopeful, it was sad as well. Choices have consequences and mistress Jane's choices led to a great deal of heart ache and destruction which the realitants had to fix in an excellent conclusion. Read the whole series.

I love James Dashner's books. This book is read by a different reader. I didn't like the change in readers. Kirby was a good reader but it was a little distracting to have a new voice.