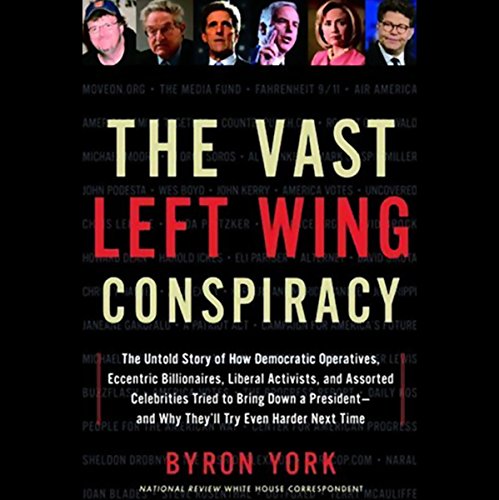 The Left is angry; angry at President George W. Bush, the war in Iraq, the "right-wing media", and more. And as National Review investigative writer Byron York reveals in this stunning, meticulously reported book, liberal activists have harnessed that anger to build the biggest, richest, and best organized political movement in American history.

Indeed, the Left's failure to oust President Bush in 2004 has obscured the fact that this new movement has transformed American politics. York documents the staggering scope of liberals' efforts, the record sums of money spent, the "shell game" financial maneuvers, the close coordination between "nonpartisan" groups and the Democratic Party, the revolutionary approaches to fund-raising and reaching out to voters, the pioneering use of movies and websites as campaign tools, and more.

The Vast Left Wing Conspiracy provides a startling behind-the-scenes look at this powerful liberal movement. York brings the reader into secret powwows at Soros's Hamptons estate, into the Chinese restaurant where MoveOn is born, to a gala event where Al Franken rants about the evils of the right wing, to fund-raisers where liberals openly mock the election laws they're ignoring, to the movie premiere where Michael Moore is feted by top-ranking Democrats, into the Washington restaurant where Democratic operatives hatch their plan, and to many other spots along the way.

One thing above all becomes clear: Despite their failure to win in 2004, liberals will only keep improving the well-oiled political machine they built.

What listeners say about The Vast Left Wing Conspiracy

When I bought this book, I worried it might be Limbaugh or Hannity style attack on liberals, but it turned out to be surprisingly centrist. It is more the story of an effort than a reality - the challenge to create a left wing answer to the Right Wing Conspiracy Hillary Clinton famously described. A group of famous and wealthy liberals, challenged by Al Franken to "fight back", organized with the expertise, enthusiasm and far-sightedness of a 1999 startup internet company. Move-On.org, George Soros, Michael Moore, and Air-America tried to create in a few months for the Left what had grown up over decades in Right. Perhaps the Vast Left Wing Conspiracy will learn from it's youthful indiscretions.

We finally have a book that's look at the "left." The Democrats sure don't want us see their agenda. Good for York!

big conspiracy theory. only if you

vastly overstates the influence of liberals, and I'm a republican!