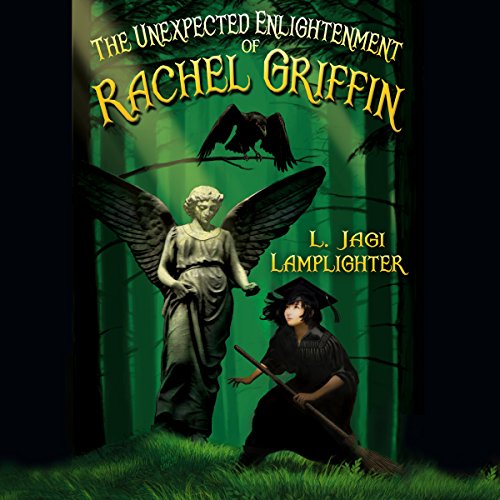 The Unexpected Enlightenment of Rachel Griffin

Rachel Griffin wants to know everything. As a freshman at Roanoke Academy for the Sorcerous Arts, she has been granted to opportunity to study both mundane and magical subjects.

But even her perfect recollection of every book she has ever read does not help her when she finds a strange statue in the forest - a statue of a woman with wings. Nowhere - neither in the arcane tomes of the Wise, nor in the dictionary and encyclopedia of the non-magic-using Unwary - can she find mention of such a creature.

What could it be? And why are the statue's wings missing when she returns?

When someone tries to kill a fellow student, Rachel soon realizes that, in the same way her World of the Wise hides from mundane folk, there is another, more secret world hiding from everyone - which her perfect recall allows her to remember. Her need to know everything drives her to investigate.

Rushing forward where others fear to tread, Rachel finds herself beset by wraiths, magical pranks, homework, a Raven said to bring the doom of worlds, love's first blush, and at least one fire-breathing teacher.

Curiosity might kill a cat, but nothing stops Rachel Griffin!

What listeners say about The Unexpected Enlightenment of Rachel Griffin

Disappointed in an weak tale

Having enjoyed J. K. Rowling's works I thought I would give this a go but it is not in the same league. The story has the youngest child at the magic school rushing around solving world threatening problems and needed to step in to assist her professors as they battle dragons in the first five days at school. The characters were shallow and the narrator halting and irritating. Very disappointed.

L. Jagi Lamplighter wrote a great story and Shana Buck does a great job of voicing all the characters and catching the emotion. I really liked this book (I read it a couple of years ago and grabbed it when I saw in available on Audible), and it pains me to say it, BUT I can't entirely recommend this recording because of the poor sound quality. I don't know what kind of microphone Mrs. Buck was using, but her voice goes from tinny to airy to echo-y. From time to time you can hear air blowing across the microphone like someone just opened the door into the room, and it wasn't an intended part of the performance. The harsh reality is, given all the background sounds, the only way to fix the audio is to rerecord the entire thing from the beginning.

If you've read and loved the books, then you might consider picking up this, otherwise if this is your introduction to the series, I would advise you to read the books.

Not what you think!

If you could sum up The Unexpected Enlightenment of Rachel Griffin in three words, what would they be?

Unfortunately, a poor narration made is difficult to immerse myself in the story. The narrator reads as though she were telling a bedtime story to a young child, and frequently stumbles across long sentences. Finally, some of the accents are simply terrible, and it could become troublesome to distinguish one character from another.

I was very pleasantly surprised by The Unexpected Enlightenment of Rachel Griffin. While the summary and some common tropes of the genre may remind you of another series about a school of magic, there are a number of significant differences. First, Rachel's world is not our world. While magic is concealed from the masses, this is a world in which monotheism never developed. Although this is not particularly important to this story, I suspect it will play a role in future books. Secondly, the magic system was given a significant amount of thought by the author. Magic is intricately tied to different studies. Math, for example, is a necessary course for students planning to specialize in Thaumaturgy. Finally, this book sets the stage for something big - and not just a group of wizards gone bad, although it has that, too.

This book delighted me a lot more than I expected. It is in the same general genre as Harry Potter, but it is distinct enough that it didn't feel derivative.

Instead, it gets wondrous and mysterious right out of the starting gate, with the theme that even the magical world of the "Wise" doesn't really understand what is happening.

The characters are colorful and charming, and even the minor ones have personality. The plot is interesting enough that I was eager for the next.

The audiobook version was excellent. There were some minor production issues, like some of the segments seemed slightly muffled. However, it wasn't very distracting, and was overall well worth it. The narrator has a great voice, and I loved how she brought the characters to life by giving them different accents and inflecting her voice with the emotions of the speaker. Not excessively in any way, but rather like the reading-out-loud mannerisms of a very indulgent mother.

loved the book. liked the performance. I had a few problems with the voice performance but it did not delete from the overall effect.

a young lady has a eventful first couple days of school. a magic school that makes more sense than Hogwarts.

Narrated put me to sleep

Boring book. I tried over and over to listen through it to get my moneys worth but finally gave up. Between the unhappy combination of the narrator and the story this book just defeated me.

A Whirlwind of a First Week At School

What made the experience of listening to The Unexpected Enlightenment of Rachel Griffin the most enjoyable?

The author did an excellent job of developing the main character and her friends. As the story went along, the image I had of them in my mind became clearer and clearer. The plot does a bit of world building in the beginning, but then it is off to the races. The author sets her story in a world that parallels our own, but with some rather significant differences, which are introduced and mostly explained through the narrative. This is definitely the beginning of a longer series, and the story points to later works in a way that makes me want to listen to the rest.

What other book might you compare The Unexpected Enlightenment of Rachel Griffin to and why?

It is certainly easy to compare this work with the Harry Potter series, but I also saw elements of Nancy Drew as Rachel tried to puzzle out what is happening at her school.

The narrator did a good job of voicing the characters with different tones and accents. This made the reading richer. Unfortunately, the editing was uneven and the pacing was on the slow side.

At times, it made me laugh, and several times I stayed in the car for a few minutes so that I could listen to the end of a chapter.

What did you love best about The Unexpected Enlightenment of Rachel Griffin?

The story is delightful, and the main characters are well drawn. The protagonist, thirteen-year-old Rachel Griffin, has a close-knit family and a perfect memory. This is her first year at Roanoke Academy for the Magical Arts, and we watch her develop friendships and the beginnings of her first love interest as she also learns how to rely on herself instead of her parents. And rely on herself, she must--for her fellow students, and ultimately the school itself are under attack from forces wielding powerful, evil magic.

This is a great book for pre-teen and teenage girls, for Rachel is a role model of a girl who can take on challenges and succeed. At the same time, it is a well-written, intelligent book that does not talk down to its young audience. And Rachel's friends, especially the orphan Sigfried Smith, are interesting characters in their own right.

The actor has a lovely voice and enunciates clearly, but she was tripping all over her tongue trying to produce the accents that all of the many characters--from all over the globe--have. The accents are not authentic and in many cases indistinguishable from one another (and when an Australian accent sounds vaguely Eastern European, that's a distraction!). The actor would have done better simply to read the book in her own accent, differentiating the voices of the characters by tone or some other means. Also, I couldn't figure out why the chapter numbers and names were spoken with a phony-sounding British accent while the narration was in an educated American accent.

There was an additional problem with long spaces in odd places in the middle of sentences. These were disruptive, as it sounded. Like the sentence was finished, when it wasn't. This problem was especially pronounced. At the beginning of the book, and by the end. It had disappeared. (And I will now stop writing the way the actor talked. You get the idea.)

There wasn't just one moment, but I especially liked how the author showed the moments of change when Rachel was growing up. She referred to the "needle of the compass" of Rachel's loyalty and trust, and we watch Rachel learning not to do what an adult tells her, just because they are an adult. Instead, she weighs the moral imperative--a friend's life in danger--and takes action. We watch Rachel becoming a hero!

There are two things that really surprised me: A), it's really funny. If there's a spin off, it had darn well take place in Magical Australia. B), While it's a very Harry Potter-esque story, there are hints of influences of everything from Narnia to Amber, and the greater mystery lurking in the background is more than sufficient to make me anxious for the next book.

Would you listen to another book narrated by Shana M Buck?

She's a little sing-song fairy tale styled for my tastes, and she stumbles over a few unfamiliar words-- particularly Japanese words and names-- but she gets much better over the course of the book. A little bit of polish would've helped.

The Unexpectedly Engaging Tale of Magic

I usually listen to audio books at work, but this story sunk it's claws into my ears and wouldn't let me go!

The story is great, and the reading is pretty good, but the recording quality is not so good, and the narrator could use a little more expression. Some would say it is perfect for all ages, even small children, and I might mostly agree, but Rachel kisses her potential boyfriend when she's only about 13 years old. Also, their beliefs world wide are strictly polytheism. I like how the story never goes to extremes.