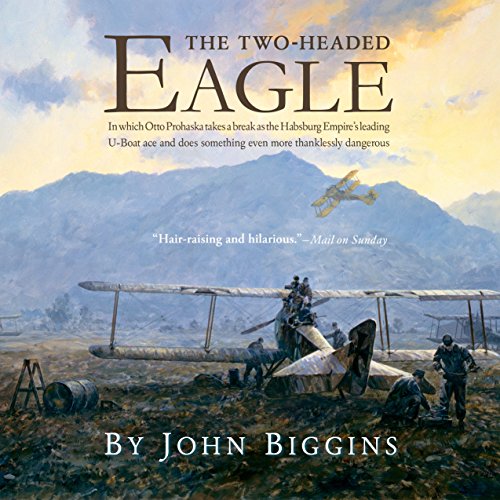 By: John Biggins
Narrated by: Nigel Patterson
Try for £0.00

It is the summer of 1916, and, as luck would have it, young Lieutenant Ottokar Prohaska of the Austro-Hungarian navy once again finds himself aloft in fragile aircraft, this time as an observer-bomber-navigator.

Otto's aerial chauffeur is the self-willed Feldpilot-Zugsfuhrer Zoltan Toth, with whom he can only communicate in broken Latin - although when all else fails, screaming will suffice!

Toth becomes Otto's steadfast comrade through one peril after another. Who but Otto would think of hurling a cumbersome and useless wireless transmitter through the balloon of an enemy airship? Who but Zoltan could fly a biplane whose engine and radiator completely block his view, forcing him to lean out his window like the engineer of a train?

The duo ricochet from battle to battle in a war where mustard gas is a standard weapon and the worst opposition comes from a combatant's leaders, who value statistics over victories. On the ground, the rickety Habsburg Empire begins to crumble under the pressures of WWI, while in the air, Otto confronts a series of misadventures and the winds of change.

What listeners say about The Two-Headed Eagle

The other side of World War I

For some reason I love how the story unfolds and the voice actor is for me soothing.