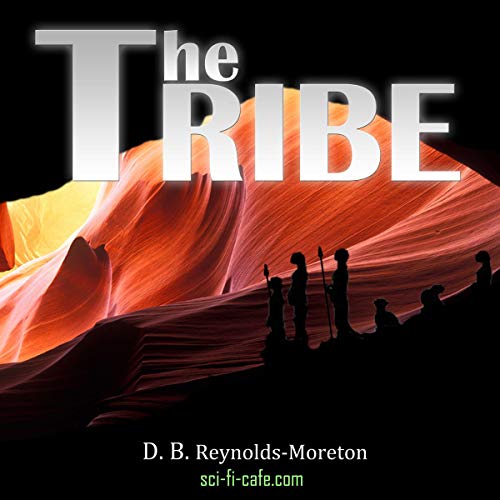 By: D. B. Reynolds-Moreton
Narrated by: Christopher Kendrick
Try for £0.00

Marooned on an uncharted Planet, Kal wanders the savage wilderness on the edge of survival until he stumbles upon The Tribe living in a cave, near extinction, and threatened by the local wildlife.

Kal instigates the technical and cultural birthing of the tiny people, which takes off at a breathtaking pace. But there is another technological force at play on the strange planet: a relic of some past civilisation, or something more current?

Note: This story has been previously published by sci-fi-cafe.com under the title The Inosculation Syndrome.

What listeners say about The Tribe

"They really do catch on fast."


"They really do catch on fast."
The Tribe, for this reader, was a disappointment after the The Seed Garden. Although nicely written in a style similar to that of old time science fiction writers and holding attention throughout, it really didn't seem to do anything other than chart the development of a small group of tiny 'people' discovered by Kal after his shuttle crashed on an uncharted planet. There are adventures, dangers, curious creatures and discoveries aplenty and Kal enjoys a pretty fulfilling life but anticipation on my part was never satisfied despite the almost ten hours of the book. Perhaps a failing in me, however.

The narration is, as in The Seed Garden, expertly given by Christopher Kendrick, his clear but gentle English accented voice pace perfect. Once again his reading distances him from the action allowing the book itself to lead and this emotional distancing is also perfect for the story. A fine lergormance.I

I did enjoy the story but, full confession, became bored by about half way through. It all just seemed too ordinary, tedious but, simultaneously, surreal and it didn't help that I was unable to empathize with the (only) lead character. My thanks to the rights holder of The Tribe, who, at my request freely gifted me with a complimentary copy via Audiobook Boom. Now, perhaps if I'd wanted blueprints for building a technological society....

I received a free code for this book.
This was the last of the trilogy , and the book i enjoyed the most. There was more connection between the "happenings" and the narrative. Again lots of story lines suggested, but not followed up with - Another book perhaps? All in all a good read, and once again excellently narrated by Christopher Kendrick, he really made the book for me.

An easy listen/read. I enjoyed it, although I was expecting a more explanative ending.
It often struck me as H G Wellsesque in style.
I received a free copy of this audio book at my own request and voluntarily left this honest review.

*I was given a free copy of this book in exchange for an honest review, this in no way affected my opinion*

(No Spoilers)
When I was looking at this book, I was excited by the premise, it reminded me of different aspects of other sci-fi books that I enjoyed and had wished were expanded on, and I went into this story with high hopes. I am very happy to say this book did not disappoint.

The best aspect of this book by far is the tribe this story is centered around. The interactions between the main character Kal and the different members of the tribe and seeing how their relationship progresses was my favorite aspect of the story and it kept me invested to the point I would sneak in a few minutes of the chapters when I was busy because I wanted to hear what was happening next. The author D. B. Reynolds-Morten did a really impressive job making you feel like you are there with Kal growing with these new people.

The literal world this story takes place in ended up being a larger aspect of the story than I expected, and it was equally exciting as the tribe itself. There are a lot of questions and exotic elements that I found very interesting, and I greatly enjoyed hearing Kal and the tribe experience it. And there are more questions and mysteries that I hope get answered in the sequel.
As for the narration, Christopher Kendrick did a very good job. He handled the production in a very professional way and he had a very smooth tone throughout the story. I felt like his voice was Kal’s voice and it added to the moments of internal dialogue the character has throughout the book. While Christopher does change his pace of words at moments throughout the story though some may find his accent/pacing to be a bit monotone.

There are only a few criticisms that I have of this book. It does take a bit of time to get going, things pickup and stay at a good pace once Kal meets the tribe but the initial few chapters before that can be a little slow at times. There are also a few points in the story that talk about breeding (not explicit or sex scenes) but some may find disturbing, though I did not believe it so.

Overall, I greatly enjoyed this story and I am excited to read the sequel transplant. I found this adventure to be very interesting and it went places that I wasn’t expecting it to go. I am happy to say that it was not your generic sci-fi story and it went about telling its own tale. I highly recommend it to anyone who enjoys a fun and interesting adventure with some science and philosophy thrown in.

This is the third book I’ve listened to by this author. I thought it was book 2 of another. Not so certain of that. Lol
The story progressed really well. The characters were enjoyable. The adventure was incredible. I could see this being a great tv series.
Narration by Christopher Kendrick wonderful as usual.
I was given this free review copy audiobook at my request and have voluntarily left this review.

I really loved this audio book it was well written read and held my interest until the end. I didn't expect such a story

A mishap aboard a space vessel leaves one passenger stranded on an unknown planet with absolutely no hope of rescue. The primitive sentient race he discovers there opens a few more mysteries - where did they come from? Why does their collective memory stretch back no further than 50 years? This wonderful book brings to life Kai's journey as his life is completely flipped upside down.
I loved this book so much, I found myself sneaking a few minutes here and there to jump back into the adventure.
There is a teeny, tiny bit of flavor from "Cast Under the Alien Sun," although not nearly as dense.
The mystery of where this race came from is a constant backdrop and I was thrilled to discover another book in the series, "Transplant," which I will be delving into immediately.
Christopher is a wonderful narrator. So good, that I'll seek out other books that he's read. He's an absolute professional and every chapter flowed by effortlessly.
Thank you for providing this book and allowing me to review it.