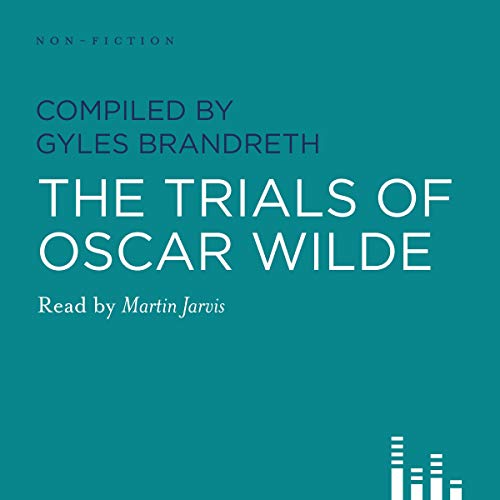 The Trials of Oscar Wilde

The Trials of Oscar Wilde

Born in Dublin in 1854 Oscar Fingal O'Flahertie Wills Wilde was educated at Oxford where he achieved a double first. His reputation as a dramatist, poet, and novelist was established in only seven years; from his first short story "The Happy Prince" to The Importance of Being Earnest in 1895. He died in Paris in 1900 ruined by a notorious libel case and two years in Reading gaol.

On 18th February 1895, the Marquess of Queensberry left a visiting card at the Albemarle Club on which he had written: "To Oscar Wilde posing as a sodomite." The accusation led to a series of three trials and the imprisonment of Wilde. This compelling dramatic recreation has been carefully compiled from the original trial transcripts.

Performed almost entirely by Martin Jarvis taking the parts of barristers, witnesses, judge, jury, and, of course, Oscar Wilde. It captures the flavour of the trials exactly.

Martin Jarvis excels himself. He vividly brings the trials to life, using the actual words of the court transcripts. He produces an astounding range of characterization to all those involved, from judges and barristers down to post office messenger boys. He is particularly good with Oscar Wilde himself, highlighting his mercurial wit, without lapsing into caricature. Well done all involved!

This was superb. Martin Jarvis' reading was excellent, he varied his voice for the different characters bringing the drama to life. The story itself is compelling and shows how brutal and unjust the British Legal System can be, a trait that unfortunately is still here today with sexual and terrorism 'offences'.

Great performance by Martin Jarvis. Very engaging. Very clear sound. I would recommend it and will listen to it again.

Wow! What a performance!

Martin Jarvis performs a true tour de force in this work, taking the part of every character in the play (often alternating characters line to line) and making each one a truely unique theatrical creation. If you want to hear great audio acting--this is the one for you! The play is also fascinating, having been taken directly from the records of the famous trials. Witty, engrossing, and deepy tragic, this is a superb audio performance that should please any listener. I can't recommend it too highly!

Exactly What It Says On The Tin

Would you listen to The Trials of Oscar Wilde again? Why?

Probably not. This is mostly for true-law fans. I happen to be one, and it was worth the listen, but there's no re-listen value, as I know what happens.

What aspect of Martin Jarvis’s performance would you have changed?

Nothing. Jarvis was nothing special, nothing bad.

The first trial is abridged to the prosecution's opening statement and Wilde as a witness, the second trial is just the prosecution witnesses (with a directed verdict motion), and the last trial is condensed to Wilde as defense witness, and summations. It's a short and sweet summary of the proceedings. Nothing less, nothing more.

Not the book by Michael S. Foldy as advertised.

This is NOT the book of that title by Foldy, which I have in hard copy. The recording itself proclaims (after "This is Audible"): "The Trials of Oscar Wilde. Performed by Martin Jarvis. Compiled by Gyles Brandreth from the transcripts of the three trials heard at the Central Criminal Courts in London in April and May, 1895." This is interesting and useful but not what I ordered.