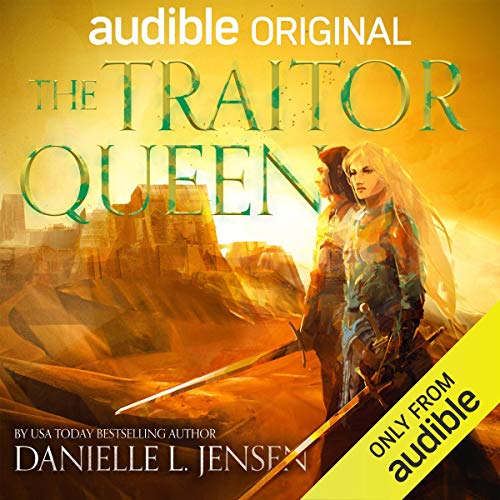 Lara has only one thought when her husband is taken prisoner: I will do whatever it takes to set you free.

A queen now in exile as a traitor, Lara has watched Ithicana be conquered by her own father, helpless to do anything to stop the destruction. But when she learns her husband, Aren, has been captured in battle, Lara knows there is only one reason her father is keeping him alive: as bait for his traitorous daughter.

And it is bait she fully intends to take.

Risking her life to the Tempest Seas, Lara returns to Ithicana with a plan not only to free its king, but for liberating the Bridge Kingdom from her father’s clutches using his own weapons: the sisters whose lives she spared.

But as Lara and her companions formulate a plan to free Aren from her father’s palace, they soon discover that while it is easy to get in, it will be quite another thing to get Aren, and themselves, back out. Not only is the palace inescapable, there are more players in the game than Lara ever realized, enemies and allies switching sides in the fight for crowns, kingdoms, and bridges. But her greatest adversary of all might be the very man she’s trying to free - the husband she betrayed.

With everything she loves in jeopardy, Lara must decide who - and what - she is fighting for: her kingdom, her husband, or for herself.

I was so excited when this was released on audible. In the first five minutes you can tell effort was put into this book. I loved every minute of it! Amazing book and performance.

I can't even begin to describe this book 😭😭 I loved everything about it!! The plot, the main characters, the sub characters, the narrators, EVERYTHING!! So beautifully written, you can't help but feel every emotion each of our characters feel as you listen, I was teary eyed, had goosebumps, gasped and so many other feelings that I feel emotionally drained 🤣🤣 I would, however, love to hear about how some of our sub characters got on!! Is Coralynn alive?? What happens to Zara and Herris?? Does Ana go back to Herondale to marry?? What about Lara's sisters?? 😱 I NEED TO KNOW!!! 😭

Definitely Not As Fulfilling As Book 1

After reading "The Bridge Kingdom", I couldn't wait for book 2. Amazon warrior like princess getting back her man sounded like a great story. What I got was not as in depth as book one. The emotions and anxiousness wasn't here as I read this book. I enjoyed the sisters and wanted more. This book spent a lot of time on the couple's struggle. Many characters from book 1 made an appearance but nothing reach developed. And the Magpie, what happened to him???

loved it enough to take time to write about it

My favorite part of this story are all the CAPABLE, INDEPENDENT, STRONG FEMALE CHARACTERS!
Thank you Danielle Jensen for adding this story to the universe. Seriously, thank you. I cannot accurately express my enthusiasm for violent female characters with weapons and wit. I just loved this story.

Wishing I could experience it all over again for the first time!

narrators were great. weird transition music was a nice change from the normal audiobook format.

This was awesome. I was nervous this would have a shorter timeline being book #2 and turned out I had nothing to worry about. It was action packed, and introspective with out the boohoos. The timeline took so many turns on the character’s journey that I couldn’t turn it off! A seriously fun listen. Made me laugh, tear up and hold my breath waiting to hear how a fight turned out. If you need an escape: listen to this series!

Best Read of This Year So Far!

I just love to read and I have been waiting to listen to the 2nd book in The Bridge Kingdom for what feels like a year. There is so much that I love about this storyline; warrior princesses, heroines versus just another book full of heroes, strong female characters, great narrators, a story of fighting for love and in some cases in this book fighting with love. It’s a unique blend of all that is good in the real of fairytale fantasy and I can hardly believe that it just came out and I heard it all in less than 24 hrs. cause I just didn’t want to stop reading. YES 🙌🏽! It was that good! If you haven’t read Danielle L. Jensen’s books yet, they are a must read! The only disappointment about this book is that now that it is finished I will have to wait quite awhile to read her next. Going to have to re-listen to both stories again!

I have been waiting for book 2 to come out! I’m so happy it did and everyday spent waiting for it was worth it!!!!!

Characters: Lara is one Amazing Lioness Empress fighting with the biggest Will Power I have ever read! ❤️ ❤️❤️😭🥰It is amazing to me how Danielle brought character development and consistency with Lara. She made it so relatable to how Lara battles her guilt, love and sense of survival throughout this book. I cried, held my breath, screamed in cheers and felt with each of Lara’s hardships and wins and losses. Lara just made me admire her every chapter with her strength and endurance..(suddenly I started making speeches to myself about how she is a hero in the middle of listening as if letting the characters in the book know lols). The women in this series are just Incredible Warriors and it is refreshing to see how they can fight with both their bodies and their minds in fighting and strategizing as good as the men and better than the men as well.
Aren❤️❤️❤️❤️ I love Aren! Danielle really did an amazing job in not wasting time with unnecessary holding of grudges nor emotional outbursts when showing Aren’s struggles in his relationship with Lara. Aren struggles in his strong desire to hate the woman who betrayed him and facing his love for her; to put his kingdom first or his wife his Queen.
Both of them were a matchmade in heaven. Their strengths show you how two people can be so different yet be the yin and yang to each other.

Danielle did an excellent job in describing the physical struggles they went through such as in seas and dessert. By creating what it can happen in the desert or sea it made it so realistic that I was captivated and off my chair most of the time...(had to take breaks, so many intense moments). The disciption of the fighting and their skills was just breath taking! ❤️

And I have to mention the sisters! I fell in love with them and in short amount of time; Danielle wrote about them in a way that built such personalities and connection with few of them (giving us glimpses of strong women with stories of their own....hopefully more books to come for them).

Narration: I love your voice and how you give life to the characters! The different women’s voices were portrayed each with their own connotations. I loved how the emotions were put into the narration making me feel every bit of their struggles, aches and states. Thank you!❤️❤️❤️❤️❤️
James also did an outstanding narrations! Aren’s deep ans yet lilting voice was amazing! And also how you can put the weight of the characters personality to showcase their intentions in their voice was just❤️❤️❤️❤️❤️👍🏽

THANK YOU SO MUCH DANIELLE FOR YOur AMAZING STORIES AND CANT WAIT FOR THE NEXT BOOK!

I loved this book. Lauren and James do a wonderful job of bringing this story to life! It was so much fun getting to know Lara's sisters and I loved exploring other regions of the world.
If you liked The Bridge Kingdom you'll love this sequel...and if you haven't read The Bridge Kingdom yet go it now and then come listen to this one. You won't regret a minute of it!

this was a book I couldn't stop little let down on the ending but this has to be the best book I have picked up all year.
the narrator's were phenomenally done and so wish I had a third book to listen to

This is so amazing. I can’t even wrap my brain around how good this was. I’m so in love I need to go re listen to the bridge kingdom and then this again. I need more books. I need more of these narrators!! Can’t say enough good things.

Could not stop listening.

Please tell me there will be a third in this series. Jensen does a great job showing Lara's inner conflict. I felt Lara's emotions with her. This is a book that I will reread many times.

I NEVER write reviews. Like EVER. Until Now. I read the first book and was a little antsy with all of the scenery and the way the author took to set the stage.I can honestly say I found myself in my room screaming at no one more than once. But once things started heating up, they SIZZLED chile. It was a balance of love, practicality and truth. 3 very different things depending on the person and I for one fully enjoyed both Lara and Aren's evolution. Not only did they change, but they didnt swell on stupidity the way some do. it was refreshing, repugnant and I will DEFINENTLY be reading these again. 10/10