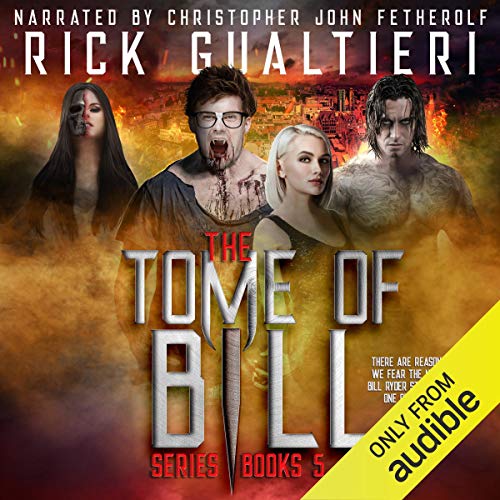 The Tome of Bill Series: Books 5-8

By: Rick Gualtieri
Narrated by: Christopher John Fetherolf
Try for £0.00

There are reasons we fear the night. Bill Ryder STILL isn’t one of them.

This omnibus edition contains the final four books of the best-selling Tome of Bill series.

An ancient evil, the last remnant of a cult thought long dead, is about to cut a swath of destruction through the world not seen since biblical times. Bill Ryder’s only chance is to muster his friends and every last bit of attitude he can - because if he fails, Hell on Earth will become far more than just a corny saying.

Bill’s been branded a traitor by the vampire race. Now he finds himself fighting off enemies from all sides while warring with his feelings for the woman he loves. Talk about lousy timing for introspection. Bill must rise to the destiny he’s been trying to deny - because if he doesn’t, his love life will be the least of his worries.

Ordered to storm the vampire stronghold in Boston, Bill must approach the doorstep of the invincible undead warlord he’s destined to face. If he stands tall and faces his fate, the world might just have a chance of surviving. If he fails, an unquenchable evil will destroy everything he knows and loves. Why can’t the end of the world ever be easy?

A goddess returned, a war between primal powers, and a prophecy to fulfill. It’s finally time for Bill to master his powers, sort out his relationship woes, and figure out how to survive his date with destiny. Because if he can’t get his act together, the curtain will fall and mankind will be forever plunged into everlasting darkness.

Join Bill in these tales full of monsters, mayhem, and foul-mouthed laughs.

If you enjoy Jim Butcher, Shayne Silvers, or K.F. Breene then you're in for a bloody good time.

Click BUY NOW and dive into the complete series today.

What listeners say about The Tome of Bill Series: Books 5-8

Funny, Buffy-esque but slightly more adult, vampire stuff. It won't win any literary prizes but then, I probably wouldn't have read it if it had. Amazing value at a pair of credits for the main series. Buy it now. That's all I have to say.

Loved it. You will too.

Nothing more to add to that statement.

Never been so engrossed in an audible book. Writing is brilliant and the vocals just brilliant !

As with the 1-4 books Bill doesn't seem to grow much as a person, this time he is contrasted with another who doesn't change. This may sway some to the unchanging nature of Bill. I still would have liked to have seen him change and that is why I held bad that final fifth star on story. I still greatly enjoyed these books and read other books by the author. I felt the series had a satisfying pay off with one small exception which I won't spoil and that isn't a criticism more of a please Mr Fetherof one more hit I need one more and you know about who.

What did you like most about The Tome of Bill Series: Books 5-8?

just a great progression for a story to its completeion

What other book might you compare The Tome of Bill Series: Books 5-8 to, and why?

What does Christopher John Fetherolf bring to the story that you wouldn’t experience if you had only read the book?

scene realization in my mind and humor to every character

laugh from beginning to end

I really enjoyed the series from book 1 right through to book 8. I am a little disappointed that I have now finished them as I now have to try and find something that is going to keep me engrossed and wanting to listen at every opportunity. This is not a book for children to listen to due to the strong language but it is also the thing that makes it more realistic and not just someone reading a story to you.

grate fun and a good ending to the series

Good if childish storyline spoilt by a narrator who either cannot read or an author who cannot spell. "Height" was pronounced "heighth" on numerous occasions, "vampiric" was pronounced "vamprick" "shone" pronounced "shown" and many other mistakes were made with the narration which made the book very hard to enjoy.
On the positive side, the characters were well created and well defined, and the story was funny and ran at a very fast pace.

This series is a nice listen as audiobooks go. The story is interesting with twists to the normal vampire genre. It stayed fun even in what would be heavy on descriptive dogma for other writers. I thoroughly enjoyed it.

Still a great story from the first half of the series. The narrator still hasn't learned out to pronounce "Super Saiyan."

I love Bill, his merry bunch, and so will you!

I can't count the number of times I have listened to this collection since it's release and sung its praises, the previous one comprises books 1-4, plus Sally's Sunset Strip. I love them that much. Rick Gualtieri as writer and Christopher John Fetherolf as narrator (Trish McKinley for Sally's story) make for a fantastic combination. I just converted my boyfriend too (he just started volume 2 of Scary Dead Things and is loving and laughing every minute) , who doesn't generally fall in love with audio books though is a lifelong bibliophile. He's a gamer and I love sci-fi and fantasy television, this series is one of the first gifts of entertainment we've mutually enjoyed. Thank you Rick G and CJF!!!

Also I've recently delved into The Strange Days series continuing Bill's completely epic saga a few years later with the release and look forward to more there. Keep it up.
Pretty please? With sugar, whipped cream, a cherry and a drizzle of blood infused chocolate on top?!?! !

Whether you are a lover of good narration, snarky comedy, good character development, or sci-fi and fantasy, or some combination thereof ... This series delivers and truly satisfies, with or without blood drenching it. I promise you won't regret the purchase.

This Narrator did not go to UCLA

I mean come on. How can someone not know how to say "Massachusetts", It's one of the first 13 states to join the union.. I MEAN COME ON DUDE!!!!!! WTF is "MassaWhosettes". To Rick Gualtier: Why would you want to keep employing this hack "Christopher John Fetherolf", to record your books??? Obviously he doesn't have a complete grasp of the English language.

Great book, right up to the last 5-10 chapters

I enjoyed most of this book, even though the primary protagonist intentionally makes childish choices and insists on holding long conversations during “every” fight.

When the final confrontations began, I was sorely tempted to just stop the book.

I have enjoyed all of the hours I've spent listening to this book. Now to find what else Rick has to offer.

Great for a long staycation!

Wow! This series corrupted my pandemic shelter time so much that I started cursing like the characters. Then my daughter started doing the same without reading the books. FML.

Sad to see it end. One of my new favorites. I liked this series so much when I got to the last book I restarted the series and listened one more time before finishing the final book. Glad I did. Now off to Bill of the dead. Thanks for that.

fantastic series! This is the third time I have listened to it and it gets better every time. Love the author very irreverent character.