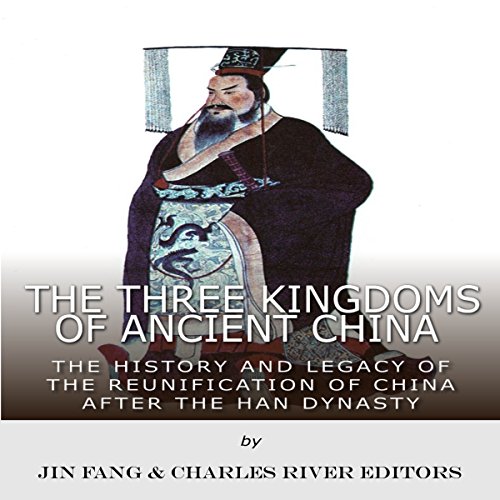 The Three Kingdoms of Ancient China

The History and Legacy of the Reunification of China After the Han Dynasty
By: Charles River Editors, Jin Fang
Narrated by: Jim D Johnston
Length: 50 mins
Categories: History, World
5 out of 5 stars 5.0 (1 rating)

The Three Kingdoms of Ancient China

One of the most turbulent and romanticized eras in ancient Chinese history is that of the three kingdoms period. During the third century AD in China, warlords battled for supremacy. This turbulent and bloody era is known as the three kingdoms period. It's also one of the most romanticized eras in Chinese history; heroes and villains like Cao Cao, Liu Bei, and Zhuge Liang have served has inspiration for poetry, novels, opera, and song in China. Perhaps the most celebrated is Romance of the Three Kingdoms by Luo Guanzhong, considered a masterpiece of Chinese literature.

In The Three Kingdoms of Ancient China, you'll learn about the events before and after the three kingdoms period and its most famous characters.

I'm currently listening to Food: A Culinary History from The Great Courses, and when we got to the segment on ancient China I was blindsided by how interesting it proved to be.  Not that the rest of the course hasn't been interesting, but because Chinese history has never been a particular interest of mine.  But today I came away from that lecture with a desire to read more about the Han dynasty.

Unfortunately as my funds are limited, I had to forego some of the pricier volumes.  I found The Three Kingdoms of Ancient China for a reasonable price on Audible and thought it might prove to be a good jumping off point.

Yeah, no. Not so much. It's not remotely what I was interested in, which is at least in part my own fault since I should have taken the time to do more research about what it is I wanted to know (more of the information Professor Albala gives in the Food lectures.) But more problematic, it's a dry recital of names and dates that manage to impart only minimal information to anyone not already familiar with Chinese history. There's no real context, or at least I could find nothing that felt like a thread to follow.

That isn't to say that I didn't take away anything from the essay.  I did get a vague feel for the kind of intrigues which brought down the Han dynasty. But a lack of familiarity with Chinese names is an enormous handicap here because there are no personalities to the players. It's more (Name 1) overthrew (Name 2) at (Place name) about (Date) which gave rise to (Name 1) claiming the throne.

I was looking for a social history and got a timeline. So kudos to Jin Fang for a clear and concise timeline, but I don't think I'll be getting any more of his work. Instead I'm going to spend some time figuring out exactly what it is I want to know, and then figuring out where I can find it.

Best get it in Whispersync

A brief history of a fixed period in the history of China's rulers. I had some difficulty relating the information in the text to the map at hand. I wish that the narrator had been more skilled in the art of lecture, as he sped through the piece too quickly for note taking. The information itself seemed well researched and presented.

It was only an hour and I knew that going in, but it turned into a litany of strange names and battles. The only context we got was the Mandate of Heaven; there was no other culture/continuity or context to hold on to. It wasn't useful to me.