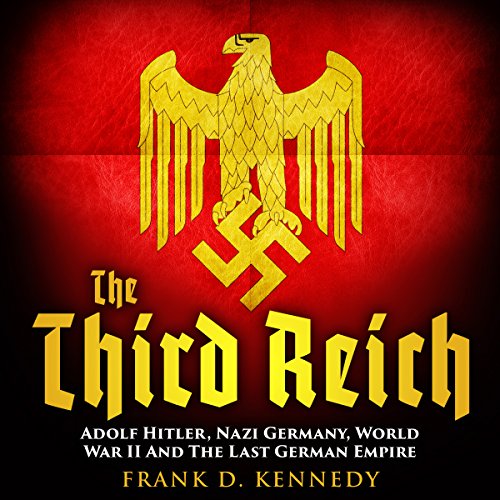 By: Frank D. Kennedy
Narrated by: Saethon Williams
Try for £0.00

The First Reich: Charlemagne, king of the Franks, is declared ruler of the Holy Roman Empire. This empire dominates Western Europe from 800 until 1806, when it is defeated by Napoleon.

The Second Reich: All of Germany is united behind Prussia under the leadership of Otto von Bismarck, victor of the Franco-Prussian War. Only Germany's defeat in World War I can break the power of the second German empire.

What was the Third Reich?

In 1933, Adolf Hitler was appointed Chancellor of Germany after convincing other members of the Reichstag that the Nazi party was better for the country than their feared rivals, the Communists. Within the year, the president of the German Republic will be dead, and Hitler will declare himself supreme leader of Germany.

But how did it happen?

The Third Reich: Adolf Hitler, Nazi Germany, World War II and the Last German Empire takes you on a guided tour of German history for the last 1000 years. You'll study the constitution of the Weimar Republic and the Treaty of Versailles, and come to understand why Hitler believed it was crucial to build a new Nazi empire that was second to no one other nation in Europe in terms of military development. You'll learn how Hitler used the rhetoric of racism and nationalism to transform himself from a democratically elected member of government into a dictator whose word was law.

Most importantly, you'll learn how those changes paved the way to World War II and the atrocities of the Holocaust.

What listeners say about The Third Reich