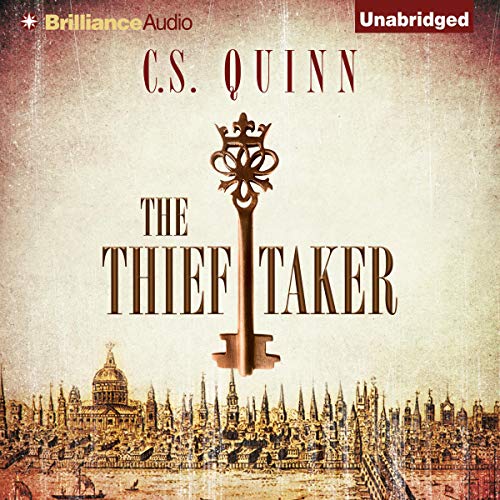 The year is 1665. Black Death ravages London. A killer stalks the streets in a plague doctor’s hood and mask....

When a girl is gruesomely murdered, thief taker Charlie Tuesday reluctantly agrees to take on the case. But the horrific remains tell him this is no isolated death. The killer’s mad appetites are part of a master plan that could destroy London – and reveal the dark secrets of Charlie’s own past.

Now the thief taker must find this murderous mastermind before the plague obliterates the evidence street by street. This terrifying pursuit will take Charlie deep into the black underbelly of old London, where alchemy, witchcraft and blood-spells collide.

In a city drowned in darkness, death could be the most powerful magic of all.

What listeners say about The Thief Taker

Being a Londoner, loved the descriptions of the city during plague time and could picture the city from the fantastic descriptions. A little disappointed by the lack of difference between characters voices, but otherwise a great story with twists and turns a-plenty.

Time travelling back to the 1600s

This is not my usual kind of book but I really enjoyed The Thief Taker. It was well researched and written. I was up until 3am until I had finished it. It makes you glad that you didn’t live in 1600’s London. The narrator was so good I could almost smell the rotting bodies of the plague victims and could picture it all in my mind. Napoleon Ryan’s female impersonation was so perfect I had to go back into Audio Books to make sure he was the only narrator as Maria’s voice sounded much like Joanna Lumley. I have now bought the second book ‘The Fire Catcher’ and can’t wait to start it tomorrow. Well worth a credit.

Story is pretty predictable with lots of cliches and stereotypes. Tons of gore - Chamber of Horrors style. Dash of sex with lesbianism in Charles' court for the fellas. (Yes he pops up for some reason.) But if you like this sort of thing it might be enjoyable as a read. But as an audio book the silly accents, and the mix of the modern and archaic (and regions) it seems like a pantomime and it is hard to suspend disbelief. I finished listening but only just.

Well, this was something of a nice surprise! Very well written and an overall expertly crafted plot with some very dark moments. The quality of the historical research is top notch so you can forgive a few shortcomings in the story telling where Quinn takes a few cheap shortcuts. The narrator is also great but his otherwise solid performance is sadly marred by a bad and "tinny" audio quality....luckily nothing that gets in the way of your enjoyment of this great hidden little grim gem.

Great story...really grabs you and twists and turns that keep you listening. Well read too.

What made the experience of listening to The Thief Taker the most enjoyable?

A great sense of place, the author really gets the population's panic of being caught in a pandemic plague. I've not listened to any books set in Restoration England before and this was interesting, it showed the uneasy truce between the factions of the Civil Wars.

What other book might you compare The Thief Taker to, and why?

CJ Sansom and SJ Parris. Both series set in historic England. They both feature reluctant detectives. This series is a little less cerebral than the Shardlake or Bruno books. It's more of a thriller and that's not a bad thing. Its a rollicking read!

Have you listened to any of Napoleon Ryan’s other performances? How does this one compare?

No, but it was a fine narration.

An enjoyable start to a set of mysteries. What seems like a relatively straightforward whodunnit soon becomes a conspiracy thriller with the state of the nation in danger.

really enjoyed and narration was great.

really enjoyed it. great narration and story ..i could see the city and felt i was there ..

Well written and read,nice historic gritty feel. Put no real plot, a few set scenes without any link and the characters are simplistic and unreal.

This story includes graphic descriptions of the horrors of life following the British civil war and during the bubonic plague along with a fairly good mystery and a little love story. Warning. It is graphic and violent. I found it dragged a bit but I found it fascinating and suspenseful enough to keep reading.

Give me the Black Death and Napoleon Ryan as a narrator and I'm THERE! You've got me hooked! Especially with such a horrific opening scene. (I often have bad dreams of olden "doctors" in their long coats and beak-like masks... who doesn't, right? Right?) And then there's the fact that Charlie has hyper observational-like skills akin to those of Sherlock Holmes. So great, right?
Well...
The twists and turns are there, the terrors and gore of the holocaust-like plague is there (in spades!); the setting certainly becomes a character in its own right, and the sense of history is there (tho' I've heard that some of the larger details are patently false... dunno... didn't actually go to Wikipedia or Google to check those out myself), But what's there also is a whole lot of convenient contrivances of this being on hand just at the moment it's needed; and that person coming along, just at the moment a presence of that sort is needed.
Great on sense of place, lacking on sense of purpose, it's a decent enough first novel, and I enjoyed it. But only because I LIKE gruesome details of plague, filth, and poverty. And I truly like Napoleon Ryan's narration (tho' I must say, I'm more used to him doing Nick Spalding's humor)--very dramatic, very stylish.
I think I'd even be into listening to the next book because for a first effort, it's rather engaging.
Just don't expect perfection. Stylish--yes. Worth the time? I thought so.
Worth a full credit?
Well, not quiiiite...

My daughter (YA) was enthusiastic about this book, and hung on every gruesome description with delight. indeed, the author's inventiveness in imagining and closely describing the plague, torture, wounds, dead bodies, rotten animals and the like is unparalleled in my experience. Otherwise, this is a detective story in the usual pattern, tried and true, nothing new. I hated it.

This was a great book! I listened straight through. You'll love the sense of place and time and how it grabs your interest all the way up to the end!

Fun in the plague years

If you're a fan of Robert McCammon's Matthew Corbett period mysteries you'll probably enjoy this as I did. The Thief Taker lacks the dry humor and wild inventiveness of McCammon's books, but is enjoyable and in it's own way and engaging enough for this reader to take a look at the inevitable sequels. Mystery, black magic, a plucky hero, a feisty heroine and a grubby sidekick are all well-employed here, along with enough plague victims to fill a season or two of any zombie apocalypse movie. Suspend disbelief in a few spots and just enjoy! The conclusion clearly leaves the door open for a full series. Napoleon Ryan does a splendid job with an array of characters and is surprisingly good with female voices as well.

Would you consider the audio edition of The Thief Taker to be better than the print version?

Good guys, bad guys , apocalyptic plague and mystery. I was hooked from the first chapter.

Not on the edge of my seat but well engrossed.

He was very good. No matter how good a book is if the narrator isn't up to it I can not listen. He is going to be one of my favorites.

Oh yes, I listened to it in one day.

Mystery Amidst the Awful Plague

This unusual detective story pulled me in despite the gory setting of England during the time of Plague (1665.) Extremely grusome depictions of torture and suffering endured by victims with the plague made me want to stop reading many times....but I'm glad I didn't. By reading this historical depiction of the life in the time of plague; I have a clear understanding of customes, politics and limited choices of all classes in English society. I'm going to get the sequel.
I thoroughly enjoyed the narrator's engaging voices but decided to give him four stars for mispronouncing a number of common words which was a disappointing distraction because it didn't fit with the characters' voices.

Historical fiction, the Black Plague in London in 1665, murder and intrigue . . . right up my alley . . . but the tale is ruined by detailed descriptions of crude sexual acts (not relevant to the story) and incorrect history . . . then to top it off, no true resolution . . . I get that this is a series, but at least tie this first one up for us . . . the narrator was good . . . so I kept listening, hoping that the book would redeem itself . . . but I was disappointed . . .

If you could sum up The Thief Taker in three words, what would they be?

The book twisted and turned with vast intrigue. I must have the rest of his titles.

His voice is sexy, intriguing and he pulls the reader deep into the story

I hope he writes more in this series.

Great book looking forward to the next book

Would you consider the audio edition of The Thief Taker to be better than the print version?

My favorite Character was Charlie I could envision him no shoes and yet all charming and at the same time all in your face if need be. Charlie was someone from the very moment I wanted to know his story and wow what a story it was.

Napoleon Ryan’s narration was very good, easy to listen to.

Yes without giving too much away the fight in the gravy yard.

looking forward to the next in the series.