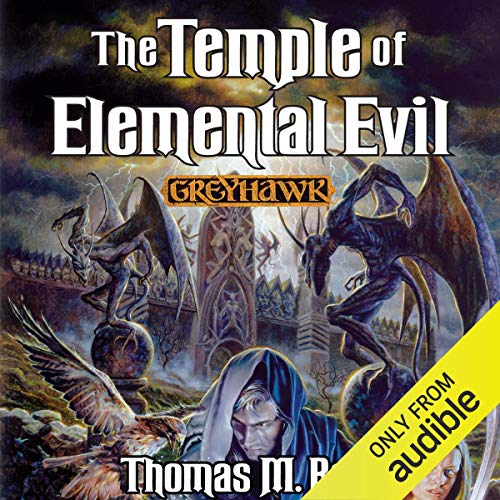 The Temple of Elemental Evil

A sinister force, long thought destroyed, stirs in the land. As a she-demon bent on wreaking worldwide havoc struggles to escape her prison and a foul demigod plots to bend her to his will, a band of desperate heroes must infiltrate the very heart of darkness in a daring attempt to stop them both.

What listeners say about The Temple of Elemental Evil

The story is fantastic unfortunately it has been ruined by the stupid stupid decision by this talentless narrator to whisper parts of the dialogue by the familiar. I can barely hear his ridiculous whispering which has made it all but impossible to follow the story solely on audible.

Please don’t employ him again as he clearly lacks the talent to create another voice & has resorted to what should have been apparent to anyone that the sound would not magically increase for listeners during his barely audible whispering!

He has ruined a fantastic book!

A great start, well narrated to a point.

The setup to this adventure is good; it ticks many a box of old world fantasy and is narrated brilliantly by Bernard of whom I am now a fan. However, the story becomes lost and forever ongoing where even the narrator becomes mediocre because of the ongoing story.
Also (slight spoiler)..

The characters become lost within the story / and then story telling which is a polar opposite from the build up. Shame. It could have been a truly epic adventure.

good version of a classic module. Having played the module as well as played the RPG game, this brought back fond memories and the voice acting and production values were really good. Strongly recommend.

A "sort of" Classic

While the adventure path is a classic, this book is rather boorish and uninspired. The actual performance/reading is acceptable. The issue is really more the author's lack of literary flare. The words are just dry when sentences are so similar in length and structure. The lack of a more colorful vocabulary probably would lend itself more towards young readers/listeners, but surely it must still seem a bit dull and unchallenging even then.

Would you try another book from Thomas M. Reid and/or Bernard Setaro Clark?

I would not try another book from Thomas M. Reid. This books was really boring. The romance put into the storyline was really bad. Main character seemed weak.

Would you ever listen to anything by Thomas M. Reid again?

Which character – as performed by Bernard Setaro Clark – was your favorite?

The thief was good.

Was The Temple of Elemental Evil worth the listening time?

NO. Skip book 3. It has nothing to do with the first two.

Skip this book and go straight to book 4. You will be happy you did.

couldn't put it down. audible version is awesome. loved the voices he does and he brings emotions out with greatness.

The characters are pretty bad and unbelievable but the biggest issue I had with finishing the book was that the romance was so cringy it made my spine hurt! The narration was good though!

it was ok. having played and run the module, this book seem like if fell short. it was entertaining and I enjoyed the story. it just fell below my expectations.

Have you listened to any of Bernard Setaro Clark’s other performances before? How does this one compare?

This is the first I have listened to with Mr. Clark as the narrator. He did a good job and maintained different inflections and accents for the different characters pretty well.

The book is entertaining and somewhat engaging. It follows a group of adventurer's (heroes of a sort) attempting to destroy an evil temple near the kindly village of Hommlet. It is a quick read based upon an almost universally well regarded fantasy roleplaying game adventure series (T1-4 The Temple of Elemental Evil, produced for use with the Advanced Dungeons & Dragons RPG). That is a work I know pretty well and many of the characters in the book felt familiar to me (e.g. Elmo, the druids, Bern, Zert, and most of the townsfolk). The locations have a familiar ring as well (e.g. the villages of Hommlet and Nulb, and the moathouse and temple itself), and the main sources of evil (Iuz, Lolth, and Zuggtmoy) are the expected ones. In other words, the book hewed pretty close to original source material in several ways - enough to make them feel known to me.

Having said that, I did wish for more character development through the book - there was almost none at all, making several of the characters feel very flat throughout. Even so, a player of D&D could easily pick out the different character classes represented by each main character, even if the author didn't include the characters calling each other druid, knight, or wizard occasionally. In fact, referring to a character by their class is something I usually dislike quite a bit, but it wasn't so intrusive in this book.

The writing and story are mediocre - neither exceptionally poor nor exceptionally well done. I knew going into this that it wouldn't be the most fantastic work of literature I have ever had the pleasure of laying my eyes upon. I did enjoy it as a quick read and entertaining diversion. It hit the right notes for a fantasy novel based on a well known D&D property.

I recommend it to anyone who will feel the tug of nostalgia when listening to a story about Hommlet, Iuz, and the Temple itself (and to learn the fate of Elmo). I do not recommend it for someone looking for a fantastically written epic heroes' tale with rich language, explanations about the magical universe, or extremely well thought out characterizations.

3 solid stars for the enjoy-ability and nostalgia.

Just couldn't get into the writing style

Love this series, but quite a change from Paul Kidd's engaging storytelling. Just couldn't get into this writer's style of writing. A little too much detail where I didn't expect, and the converse elsewhere.

What was most disappointing about Thomas M. Reid’s story?

The action scenes read like a play-by-play rather than a flowing narrative.

What does Bernard Setaro Clark bring to the story that you wouldn’t experience if you just read the book?

This guy is an incredible narrator.

The story was pretty weak. I've played more interesting D&D games on bad campaign. Bernard Setaro Clark keeps it interesting with his acting and accents. I am in between a big series and this filled the void briefly.