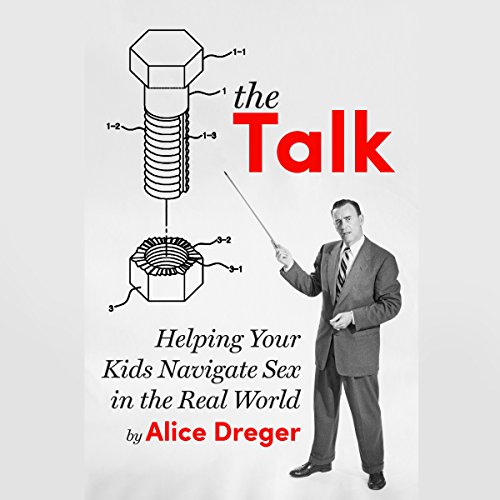 Are you having a hard time talking to your kid about sex? Join the club. Alice Dreger, PhD, brings her unique sense of humor and refreshing directness to bear on this landmine of a subject, laying out clear methods that emphasize respect, health, and happiness.

After Dreger's live tweeting of her son's abstinence sex ed class went viral, Dreger was asked by many parents how she had managed to raise a 14-year-old so comfortable talking about sex - comfortable enough even to challenge sex ed teachers when they presented misinformation. The Talk is a response to those questions. In it, Dreger explains how you can engage your children in productive conversations about sexual anatomy, sexual behaviors, sexual responsibility, and sexual pleasure and how you can do it in a nonshaming fashion that will support not only your child's well-being but also your long-term relationship with your child.

Alice Dreger, PhD, is an historian of medicine, science, and sexuality and an award-winning writer. Her essays on sex have appeared in The New York Times, The Atlantic, WIRED, Slate, The L.A. Times, The Chicago Tribune, Pacific Standard, Fathering Magazine, and Psychology Today, and she has appeared as a sex expert on dozens of broadcast programs, including Oprah, CNN International, NPR's All Things Considered, and Savage Lovecast. Her consultancy work includes editing a handbook for parents of children born with relatively uncommon forms of sex anatomy (intersex) and coediting a teaching guide on LGBT patient care for the Association of American Medical Colleges. She has been on the faculty of several universities, most recently at Northwestern University's Feinberg School of Medicine. Her last book, Galileo's Middle Finger: Heretics, Activists, and One Scholar's Search for Justice has been named an Editors' Choice by The New York Times. It has received praise in The New Yorker, Salon, Forbes, and New York Magazine and has just been released in paperback with a new afterword.

"Alice Dreger's descriptive audiobook is a helpful tool for parents who are searching for the right words and tone to take when discussing sex with their children. Narrator Jennifer Riker's warm, conversational style is reassuring. Dreger, who has a doctorate in clinical medical humanities and bioethics, emphasizes that parents should be descriptive and not judgmental when they explain sexuality to their kids. She includes a refresher on the basics of all things sexual and encourages the use of correct terms, not slang or euphemisms. Dreger helpfully adds personal examples (from her now 15-year-old son) when discussing how to explain the difference between a sexual predator and an affectionate relative, caution about online pornography, public versus private behavior, and homosexuality. She also reminds parents to prepare their kids for people who have different viewpoints. Hearing a clear explanation about sexual consent is helpful for EVERYONE. Ultimately, listeners will appreciate this direct approach, presented in a supportive manner." (AudioFile Magazine)

What listeners say about The Talk

A fantastic resource for fact based parenting

This book takes a no-nonsense approach to parenting using concrete facts about their bodies. Dreger hits all of the critical topics from the actual "talk" (which shouldn't be a singular talk as she aptly notes) to navigating gender differences, intersex issues, gay marriage, pornography, and more. Using positive parenting techniques, she urges parents to relate to their children without judgment. A must read/listen for any person parenting in the digital age.