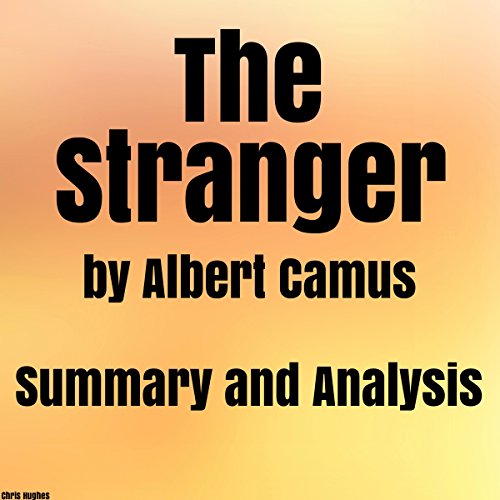 By: Chris Hughes
Narrated by: Michael C. Gwynne
Try for £0.00

Please note: This is a summary and analysis of the book, not the original book.

The Stranger, by Albert Camus, is a French philosophical novel written in the mid-1940s. In the novel, we are introduced to our narrator, Monsieur Meursault. Meursault is a French man living in Algiers and has just received word via telegram that his elderly mother has passed away. He notes that he has asked for two days of leave from his job, even though his boss is quite annoyed by this. He is to travel to the Home for Aged Persons in Marengo, which is at least 50 miles from Algiers. He takes the bus and sleeps for most of the trip from Algiers to Marengo.

Once he arrives in Marengo, he realizes he has a one-mile walk to the home. When he finally arrives to the home, he is greeted by the doorkeeper. The warden meets him in his office and tells him that even though Meursault all but abandoned his mother in this home, it was the absolute best decision he could have made. The director knows that Meursault makes very little money at his job and could not take care of his mother. He also claims that Meursault's mother had made great friends and had enjoyed spending her last few years with people of her own age.

Meursault had felt judged by the warden, but after this conversation, he agreed with the notion that his mother had been better off in this home, instead of living with him. We see Meursault rationalizing why he had not been to visit his mother much, as it cost him an entire weekend day on Sundays, the commute to the home was an hour each way, and getting a ticket for the bus was a hassle in and of itself. The director then informs Meursault that he has arranged for a religious funeral ceremony to be performed the next day. Meursault knows that his mother was not religious and would not care.

What listeners say about The Stranger by Albert Camus: Summary & Analysis

I was looking forward to this, an analysis of a book I've always loved. The narrator is excellent. However, there was so much more to be understood. I would have enjoyed more analysis of the language, which is used so beautifully in this short novel. It would have been interesting to hear a critique of the words and descriptions Camus so expertly crafted.
Context was missing too. The novel's place in history, the location of Algiers, the era.
I've come away feeling cheated out of a credit! I think it would be fine as an addition to the novel itself, but this on its own at 37mins is a wee bit of a cop out.
I'll be looking out for more from this narrator though for sure.

Narrated well. Not much analysis. Would not be good to use as a way to prepare for an exam.