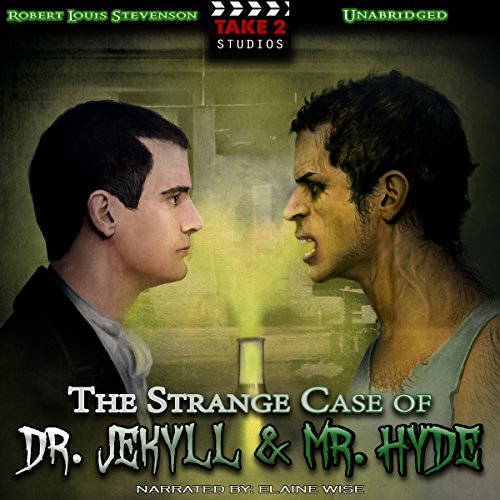 The Strange Case of Dr. Jekyll & Mr. Hyde by Robert Louis Stevenson tells a mysterious and thrilling tale through the eyes of the honest and good-natured lawyer, Mr. Utterson. In the will entrusted to Mr. Utterson, Dr. Jekyll states that when he dies, all of his money and possessions shall be left to Mr. Hyde. At first Mr. Utterson and his close friend, Mr. Enfield, suspect that the brutish and child-trampling Mr. Hyde is somehow blackmailing the well-known and well liked Dr. Jekyll. Time passes without incident until unexpectedly, a maid witnesses the gruesome death of an older man at the hands of Mr. Hyde in the middle of the street. Mr. Hyde disappears despite the best efforts of the police to hunt him down.

Robert Louis Stevenson takes the listener through an interesting series of events in which the mysterious link between Dr. Jekyll and Mr. Hyde is not revealed until the very end of the audiobook, when Mr. Utterson reads the documents left behind by Dr. Jekyll and Dr. Jekyll's former friend, Dr. Lanyon. Dark and foreboding, The Strange Case of Dr. Jekyll & Mr. Hyde is a fun roller-coaster ride with a strange ending that wonderfully ties the entire story together.

What listeners say about The Strange Case of Dr. Jekyll & Mr. Hyde

I listened to at least ten different samples, and this version is by far the best. I needed something that would move at a pretty good clip because my eighth graders grow bored very quickly. Even though it's read by a woman, it doesn't take away from the fact that it's pretty much an all male cast of characters, and you will appreciate her articulation and speed. I highly recommend this!