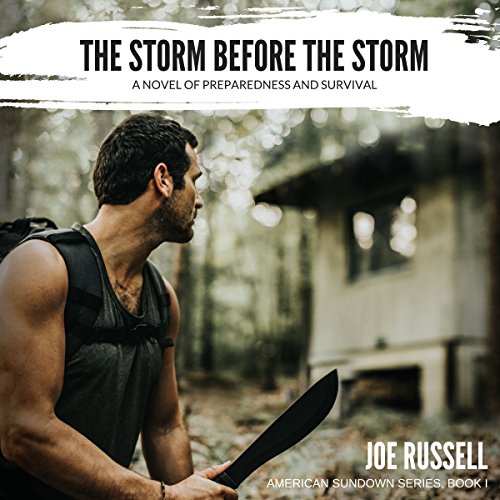 The Storm Before the Storm: A Novel of Preparedness and Survival

The Storm Before the Storm: A Novel of Preparedness and Survival

As a prepper, Dave Galanos has always made an effort to do what he can to prepare for the unexpected. But when something goes terribly wrong halfway through a backpacking trip with his wife and family, his world is turned upside down, and he is tested in a way he had never planned for.

The trip into the Alleghenys of West Virginia starts off well enough but takes an unexpected turn when the two women, Sandra and her sister, Jen, leave camp and don’t return from a nearby stream. Dave and Mike, Jen’s new boyfriend, go looking for them and find evidence that the women may have been kidnapped. Miles from civilization and with no working cell phones, Dave and Mike will set off to find Sandra and Jen, unconnected and unconcerned about what is happening in the world around them.

Dave has been hardened by real-world self-defense scenarios in the past and has naturally equipped himself with tools that may be required for an unexpected circumstance. He will have to work together with Mike, who he sees as more of an annoyance and a liability than a useful ally. They will have to work together to beat the clock, the elements, and a group of dangerous locals in order to rescue their companions in this realistic, rugged, and action-packed story of preparedness and survival.

The storm is just beginning. Will Dave and his companions have what it takes to survive?

The Storm Before the Storm is the premier novel by postapocalyptic author Joe Russell and the first installment in the American Sundown series.

the Storm Before the Storm... So far

[This book was given to me for free upon giving an unbiased review within a set time period,I am no way affiliated with any creator/narrator/publisher]

Ok so, sticking to my usual review style here is what I think of the book so far after going about half way.

Joe Russell: New author to me, he has a smooth writing style that tends to blend the scenes and characters smoothly. I haven't done research to see how closely related Russell is to a "prepping lifestyle" but his points seem accurate. His story is easy to follow, I was able to do chores while listening and never had to rewind to catch something it was all clearly thought out grammatically and with correctly placed verbiage. So that made me happy.

Kevin Pierce: Wow...So, let me tell you how impressed I am with this man's voice. I requested a chance to review this book based solely on wanting to hear more depth and range of Pierce's narration talents; and was not disappointed. Pierce is not a man of frilly accents, nor does he worry much about high falsetto female voices. Honestly, it makes me feel like I'm out camping, listening to a story around the campfire. After listening to a couple hours I realized I knew the voice and have read other works strarring Pierce, such as "Good Fences" and "The SHTF series" and many many others. Really this man is a dynamite vocal talent, I am sorry it took me this long to realize it.

Plot: This book so far seems to play along the lines of most PAPOC stuff; characters right before something happens, oh shit something happened, characters post.... something happening. makes sense though stick with what works. However in this beginning the main character has a Tarantino style flashback to a semi-traumatic episode that helps explain why he's such a badass and can run the plot forward. As usual our main character is a rough and tumble object of masculine bravado, and is accompanied by his retinue of misadventures. All in all so far there has been some good whit, and solid character development I'm looking forward to the second half. more to come soon...

Great Book if you have Insomnia

If you could play editor, what scene or scenes would you have cut from The Storm Before the Storm: A Novel of Preparedness and Survival?

As I said earlier less detail on the area it is very boring.

I requested a review copy of this book and I am giving this review on my own.I am sorry to the Author and Narrator for my review hope you improve on your next book.

Excellent Start to the Series

I love an apocalypse story and I particularly love an EMP apocalypse story, so it's no surprise to me that I thoroughly enjoyed "The Storm Before the Storm." And beyond that, I can actually say that so far this is my favorite EMP tale yet! All of these stories seem to begin with the most obvious moment - people driving along when their cars just stop, or they're home and their power goes out and their cellphone no longer works. It's the moment you expect to read about when thinking about an EMP. But this one was different; it begins with what feels like a very real and compelling story about two couples that venture into the woods for a nature filled few days. Things start to go wrong for the group but the evil at hand is of the human variety. It's only close to the end of this first book that the group even realizes what is happening in the world at large. I thought that was extremely clever, the characters are fully fleshed out and the adventure they are on will draw you in. Kevin Pierce never disappoints with his narration, he is one of the very best on Audible!

Dave and Sandra are preppers who enjoy hiking the West Virginia mountains. They haven't had the best luck avoiding criminals, though, despite both being God-fearing Christians who live quiet, responsible lives. When a weekend camping trip goes completely off the rails, Dave will put his life on the line to ensure the safety of his family. But just as one hellish nightmare ends, another horror is awaiting them on the horizon.

This installment of the Sundown series is not a post-apocalyptic novel, but instead focuses on prepping, outdoor survival, and personal safety. There are descriptions of violence being committed to and by the main characters, but it isn't gratuitous and serves to illustrate teaching points in the story. A major twist at the very end sets up the next installment, and turns this story on its head. I'm already anticipating the next book!

Kevin Pierce is a flawless narrator, as usual! He brings a consistent and reliable professionalism to this story and to all of his performances, which is something I respect and have always enjoyed.

I was voluntarily provided this review copy audiobook at no charge. My review is unbiased and the opinions expressed herein are 100% my own.

Loved this story! Dave and his wife, sister in law and sister in law's city slicker boyfriend take a weekend to go camping and hiking in the Virginia wilderness. They meet some sketchy characters on the way but move along. The girls are kidnapped and Dave and Mike strike out to find them. Cut off from civilization they can only rely on themselves. Very good story with twists and turns and prepper fun. The prepper aspect has made me consider stashing my own stockpile of supplies just in case. As they say its better to have it and not need it than to need it and not have it! Can't wait for the next in the series! I received a free review copy of this book at my request and have voluntarily left this review.

Great first book. can't wait for more. This seems like it's going to turn out to be a great series.

A Great Start To A New Series

I was pleasantly surprised at the decent level of character back stories along with a fairly good movement of the main story. I didn't want to stop the book to do other things like sleep or eat. I look forward to the next book! Kevin Pierce truly brings the characters to life! Look forward to more books from this new author!

A different twist to this story

I enjoyed listening to this book. The story started out very differently than the other books of this type that I have read or listened to. Kevin Pierce is one of my favorite narrators and as always he did a wonderful job. I am looking forward to the next book in this series.

Great kick off to a new series

What I really liked about this book was that it really brings you into the next book nicely. There was a lot of character development in this book. But not in the way that it's boring.
This is an excellent action-packed book. It's a great process to what I believe the next books are going to be about, WSHTF. There's a lot of useful information in this book along with a great story line. I really look forward to reading more from the series.

Kevin Pierce does an excellent job as always narrating this book. He has quite a great voice for this line of work and seems to really get into the character development as well as the story line.

You can tell if you read some of my reviews, I am very honest in my reviews.

This book started a little slow for me but once it picked up I couldn't put it down. It grabbed my attention and I finished it in one sitting. It's full of action, drama, murder and mayhem, and even touches on human trafficking. It'll make you stop and think! I look forward to the next in the series. Kevin Pierce is one of my favorite narrators and, as always, he did a fabulous job with the narration. I received a review copy at my request and voluntarily reviewed.