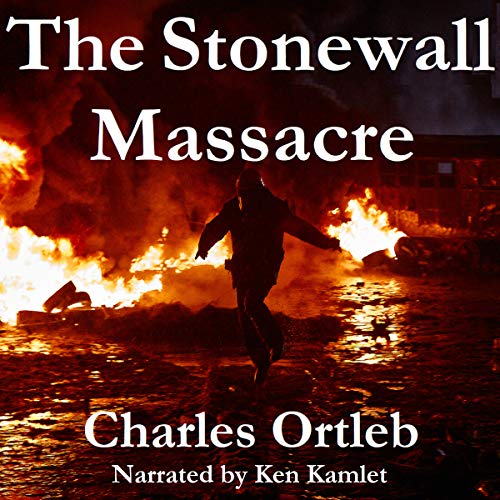 The Stonewall Massacre is one of the most entertaining and provocative fictional works of alternate history ever written. This gripping story asks the politically explosive question, "What if the gay movement had been completely destroyed at its moment of birth in 1969?"

The visionary tale is told from the perspective of a gay waiter who happens to leave the famous Stonewall Inn, a gay bar located in Greenwich Village, just minutes before a police raid on a hot night in June. What happens in this imagined version of the Stonewall riots is a terrifying nightmare of violence and repression which results in the gay community permanently retreating into the shadows without any hopes of ever achieving any form of civil rights.

Ortleb captures perfectly the sinister glee of the conservative forces in psychology, religion, and the media who are only too willing to collaborate in the permanent suppression of a hated and feared sexual minority.

The second part of The Stonewall Massacre is where things get really wild. Set in 1982, at a time when the world is completely free of out-of-the-closet homosexuals, it describes the outbreak of a strange illness which first strikes women who are feminists. The disease is first perceived to be a kind of chronic fatigue syndrome, but as doctors study the women more, they describe it as "acquired immunodeficiency syndrome (AIDS)." As AIDS begins to break out in women who are not feminists and in men and children, they realize that AIDS is not just a feminist disease. All the forces in government and science are quickly marshalled to deal with what was initially thought to be a form of chronic fatigue.

This visionary tale could open a debate about Chronic Fatigue Syndrome and AIDS that will turn both epidemics upside down.

What listeners say about The Stonewall Massacre

Since I’m primarily a reviewer of romantic fiction, I want to start by saying The Stonewall Massacre is not a romance. What the blurb proclaims as a “fictional work of alternate history”, well that’s exactly what this is. The blub also states that the author, Charles Ortleb, is a journalist. I was intrigued (and curious) and I had to give this one a try. The story is very well written, and reads as a first hand account of events. The main character tells his story of what happened after narrowly escaping a gay dance club before the men inside are terrorized and murdered in 1969. After the attack, instead of finding support and fighting for their rights, gay men are persecuted and live in hiding, afraid for their lives. With the outbreak of AIDS in the early ‘80s, the government, law enforcement, and the media are left looking for a way to explain the cause and spread of the AIDS virus. If gay men were never here to “cause it”, then who can they blame? Mr. Ortleb gives an in-depth explanation of the 5 W’s, and it’s all very well presented. Deliciously dark, with haunting imagery, The Stonewall Massacre definitely made me think. The overwhelming feeling I got from this story is how much power the media has to influence the course of history. The way people perceive things, and how easy (or hard) it is to prove or change them. Humans, by our nature, are so simple to lead one way or the other... Imagining how differently things might have gone down if LGBT pride had never found roots in America, or what might have changed if everything had been spun differently…? Written as a personal account, narrator Ken Kamlet’s smooth and pleasant voice had me feeling like this was a friend telling his story. It kept me engaged and I was interested to find out everything that happened, and how it all ended. In the beginning there’s a youthful innocence in his voice as he’s explaining his job as a bartender in the lively restaurant. The fondness in his tone as he describes the colorful characters and his daily life is charming. I could then feel his panic start to rise directly in the aftermath of the massacre. In the end he changes his voice to reflect the resignation of the older, disillusioned man who has watched this all happen and is left to survive as best he can. Thoughtful, and beautifully written and performed, The Stonewall Massacre is one audiobook I won’t be forgetting any time soon. an audiobook copy of The Stonewall Massacre was provided to me for the purpose of my honest review