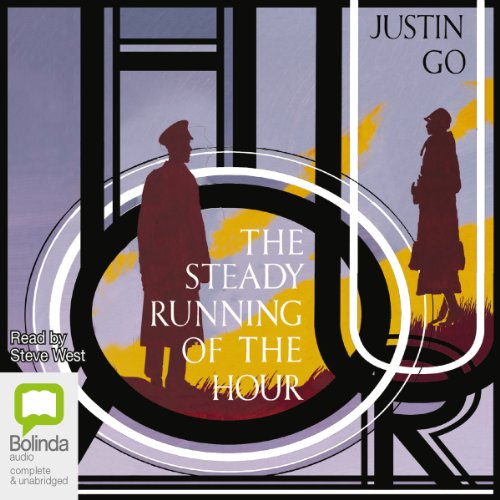 The Steady Running of the Hour

In 1924, the English mountaineer Ashley Walsingham dies attempting to summit Mount Everest, leaving his fortune to his former lover, Imogen Soames-Andersson - whom he has not seen in seven years. Ashley’s solicitors search in vain for Imogen, but the estate remains unclaimed.

Nearly 80 years later, new information leads the same law firm to Tristan Campbell, a young American who could be the estate’s rightful heir. If Tristan can prove he is Imogen’s descendant, the inheritance will be his. But with only weeks before Ashley’s trust expires, Tristan must hurry to find the evidence he needs.

From London archives to Somme battlefields to the Eastfjords of Iceland, Tristan races to piece together the story behind the unclaimed riches: a reckless love affair pursued only days before Ashley’s deployment to the Western Front; a desperate trench battle fought by soldiers whose hope is survival rather than victory; an expedition to the uncharted heights of the world’s tallest mountain.

Following a trail of evidence that stretches to the far edge of Europe, Tristan becomes consumed by Ashley and Imogen’s story. But as he draws close to the truth, Tristan realises he may be seeking something more than an unclaimed fortune.

What listeners say about The Steady Running of the Hour

Haunting, but not in a good way

I liked the historical detail - it seemed to be well-researched. He can obviously write.The worst thing is the ending. It makes all the hours of listening seem futile.

What could Justin Go have done to make this a more enjoyable book for you?

He could have done a great deal of editing, made the relationship between Tristan and Merielle more believable and given us a proper ending.

The narrator seems to be very confused about accents. The first person character writes with an English accent but speaks and writes postcards etc with an American accent. Weird and disconcerting. He gives all French characters comedy 'Allo, 'Allo accents, even when they are speaking their own language. Who decides this stuff - is it up to the individual actor?

Hollywood would NEVER make a film with such a sketchy ending - they'll probably make it but change the ending. I can't imagine i'd go.

Don't think, when you get to the end and have re-listened to several chapters, that it's YOU that isn't smart enough. This is a shameful way to end a book.

I Cannot Recommend This Book - Verging on Dreadful

I started listening to this while I was quite unwell. This is the only possibly explanation for the fact that I carried on to the bitter end. My resistance was obviously very low...

By the time I got to Part 2 of the download, I was feeling a bit better and it suddenly dawned on me that I would never normally listen to such a poorly constructed and delivered book. However, I was only a few hours off the end, so I switched it to double speed and carried on.

It is flawed in several ways. First, and unforgivably, the plot. It's just silly (though when I read the synopsis, it really appealed to me), and so far-fetched it's almost fantasy, but without the magic! Incredible coincidences crop up over and over again. The story does not have one thread of plausible plotting. The veering between time zones is usually a device I like, but in this one, it's just daft.

Second, the characters. I disliked or despised every single one of them except the lawyers, but unfortunately, the worst offenders are the three main characters. Tristan, the modern character, is completely without any personality at all. We know nothing of him, he rarely speaks - though when he does, it's really annoying as he 'thinks', i.e., his internal, first-person monologues, which are read to us in an English accent, but says his (happily, very few) words in a high-pitched American voice. He holds no views, thinks no interesting thoughts, and simply drifts along in a far-fetched paper-chase across Europe.

The main characters - these are set in the past, and are the subject of Tristan's quest - are Imogen and Ashley. Ashley is described as 'witty' at one point - maybe this was when I was too ill to appreciate it because like Tristan, he is not fully formed. He isn't, to be fair, as embryonic as Tristan in his personality perhaps because we spend so (very) long with him. He is emotionless for most of the book, though he suddenly develops some passionate feelings towards the end. Otherwise, we must assume he loves Imogen (God knows why) but is not in touch with his expressive side.

Imogen is really a thoroughly unpleasant character. Selfish, self-absorbed, illogical to the point that I thought maybe the author was going to make her mentally ill to explain what she does, she just creates a really annoying series of chaotic situations, which seem to be a plot device that enables her to, yet again, flounce off into the night. I grew to dread these strops, because they always led to a turgid internal monologue by Imogen, so I skipped the last few. Had I been her poor sister, I'd have left her in Sweden after a long weekend. She's not nice, no-one, not even her own family, could love her, so it's incredible - even more incredible than the tissue-thin plot - that Ashley did fall for her.

Finally, the narration. I didn't like it but it was the strongest aspect of this download. This tells you all you need to know about the content. The reader has a pleasant voice, but really struggles with anything that isn't frightfully British, circa 1920, Mayfair. His German accent made me laugh out loud. His female voices are really irritating. I don't know why he reads Tristan in both English and American accents, maybe the editor made him do it.

I would strongly urge you, if you are thinking of this download, to first buy a used paperback for a couple of quid from a second hand seller on Amazon. I wish I had not wasted a credit, and so much time. Now I am better, I realise they got me while I was weak...

After Trying To Listen 3 Times I Have Given Up

I enjoy listening to audible books whilst driving but on occasions I have to rewind just to make sure that I catch everything. I am afraid that I have tried starting this book now 3 times and have given up completely. I am not sure if it is the story or the narration, I just seem to get lost. There is a little time shifting that does need focus but some parts just seem to be disjointed. Based upon my experience with the book I can't say that I would recommend this.

Would you ever listen to anything by Justin Go again?

I don't think that I will bother with any other books by the author.

What aspect of Steve West’s performance might you have changed?

I can't honestly say, but listening to the book has just confused me and I don't know whether it is the story or the narration. I might be tempted to try Steve West again but it would need to be with a story that I was really enthusiastic about.

Given the synopsis I have to say that I would like to understand the story. So if it was made into a film I might buy it on DVD to try again but I can't imagine that I would go to the cinema.

Maybe listening to the story when not driving would enhance my understanding, but as listening whilst driving is the only reason that I use audible books I am unlikely to listen out of the car. I am deleting the book from my device.

Intriguing, two stories in one

Although the romance on which this mystery is based is rather improbable, the story is totally gripping from the first. The book follows the story of a young man searching, with powerful motivation, for the truth about what became of two young people he believed to be his great grandparents, winding their real stories between his unearthing of clues. All three of the stories we follow are fascinating and the descriptions of his forebears' experiences at the time of the Great War are vivid and moving. The final revelation is tantalisingly treated and the end of the book, while perhaps a little predictable, feels very right. I loved this book and would choose more by this author and this narrator.