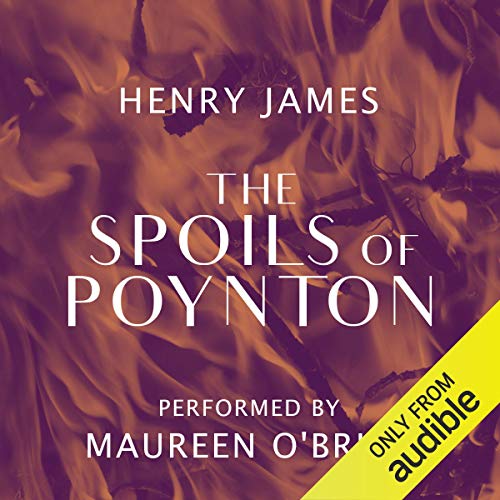 The Spoils of Poynton

The Spoils of Poynton

Written by Henry James, this Audible Exclusive of The Spoils of Poynton is narrated by actor and author, Maureen O’Brien.

The Spoils of Poynton is a compelling story about the fight between possessions, morals and love. It was originally published as part of a series in The Atlantic Monthly in 1896, but was released as a short novel only a year later.

Mrs Gereth, a wealthy widow, is dreading the day that her son, Owen, gets married. She hopes that he will marry a woman who will appreciate their home and all of its treasures as she does. So she enlists the help of Fleda Vetch to try to corrupt the impending marriage of her son and Mona Brigstock - a philistine who is determined to marry Owen in order to inherit Mrs Gereth’s valuable possessions and home by any means.

Meanwhile, Fleda hides her real feelings towards Owen. Even when he ends up feeling the same way, Fleda cannot bring herself to marry him as this would force him to break his engagement to Mona, and thus betray all of her own ideals.

Born in 1843, Henry James was a part of an accomplished family; both his father and elder brother were famous philosophers. He was educated in schools in America and Europe and entered Harvard Law School in 1862. Over the next few years he began writing reviews and novels; he even tried his hand at playwriting. Just before his death in 1916, he was given an ‘Order of Merit’: an honour founded by King Edward VII in 1902 and which continues to date.

Maureen O’Brien is an award-winning actor and author. She has won the Sony Best Actress award twice and her play, The Cutting, was nominated for Best Play at the London Fringe Awards and Best Newcomer at the Evening Standard Drama Awards. O’Brien has starred alongside William Hartnell in Doctor Who, and was a regular during season two of Casualty. Her Audible credits include numerous Doctor Who audiobooks as well as other Audible Exclusives such as Hungry Hill by Daphne Du Maurier.

This story kept me guessing right up until the final moments...I don't want to give the ending away so won't talk about the content too much beyond saying that it was a real, human, love story - would highly recommend both the narrator and the book.

A good yarn by the Master beautiful read by Maureen O’Brien. She captures the somewhat naive charm of the heroine but she is at her best when reading the commanding voice of the dragon who once ruled over Poynton.

A brilliant reading of a lesser-known, but fascinating tale of love and greed in 19th Century England. Ms. O'Brien has a keen understanding of James's complex style and characters, whom she subtly and distinctly delineates in this excellent recording.

Rich and strange-an obsession with "stuff"

The Spoils of Poynton has an unusual topic for a novel-the obsession with objects. Considering how the love of, and possession of "things" is central to so many people's lives, it is odd that it does not figure more importantly in novels. The theft of "things" and the desire for material wealth provide the subject of a great many novels, but the actual obsessive delectation of one's possessions rarely provides the plot motivation. Maybe it requires a genius like James for such an undertaking. "The Spoils of Poynton" with its heroic battle to save the "Spoils" from the Philistines is wonderfully tragicomic.

James is brilliant. The narrative is provocative and darkly beautiful. Maureen O'Brien breathes life into this classic. I loved it.

Would you consider the audio edition of The Spoils of Poynton to be better than the print version?

Not exactly. But I think it enriches the print version so that I notice things I didn't while reading.

The mystery of the power of collecting objects. The description of Poynton itself. The main character's aesthetic sense. Her honor. Henry James' brilliant writing.

Have you listened to any of Maureen O'Brien’s other performances before? How does this one compare?

I listened to What Maisie Knew which was incredibly good. I thought that one couldn't be bested but Spoils is just as good. I will now listen to Middlemarch. I wish she did more. I am not so interested in listening to Lawrence but probably will because she is so good. However I wish she would do more Henry James novels. She is one of your truly great readers.

PLEASE more novels read by Maureen O'Brien.
Portrait of a Lady, Turn of the Screw, The Golden Bowl.

This is corridos study of the fat of attachment to things has on one.

Study in the weaknesses and strength of human beings.

I don't know is it worth so tragic are just very cathartic.

But what I do know is that marine O'Brien is one of the most gifted narrators I've heard. I'd be tempted to listen to almost anything she narrates.

A classic but longer than necessary

I read this for a class in Brit Lit. Simply because it's Henry James, it's not the worst of the bunch. It is rather long winded for the outcome. The psychological portraits seem apt. The legal stuff a tad unbelievable, but probably true. To me it all rests in one idea. Mrs. Gareth's son does not have the kind of adoration a son should have for his mother, so she is being ousted by the despicable woman he wants to marry. The woman Mrs.Gareth wants him to marry is too morally sound to do what must be done to displace the fiance, so much chaos ensues.

The ending is troubling for an absence of explanation. I like a cliffhanger, but I feel there was not enough information in the characters to give me even a guess at the perpetrator of the final act. It's almost as if James threw up his hands in disgust at his characters and took action with his pen to free them from a final decision.

Anyway, it's worth the credit; though it lacks humor, sustained tension and, except for a final action by Owen and a last page event, it also lacks surprise.