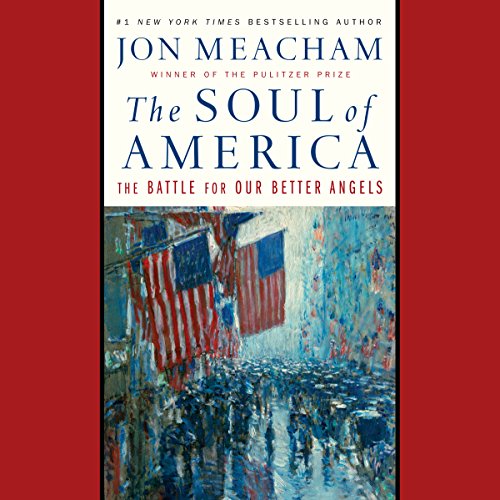 The Soul of America

Pulitzer Prize-winning author Jon Meacham helps us understand the present moment in American politics and life by looking back at critical times in our history when hope overcame division and fear.

Named one of the best books of the year by NPR, the Christian Science Monitor, and Southern Living.

Our current climate of partisan fury is not new, and in The Soul of America Meacham shows us how what Abraham Lincoln called the "better angels of our nature" have repeatedly won the day. Painting surprising portraits of Lincoln and other presidents, including Ulysses S. Grant, Theodore Roosevelt, Woodrow Wilson, Franklin D. Roosevelt, Harry S. Truman, Dwight Eisenhower, and Lyndon B. Johnson, and illuminating the courage of such influential citizen activists as Martin Luther King Jr., early suffragettes Alice Paul and Carrie Chapman Catt, civil rights pioneers Rosa Parks and John Lewis, First Lady Eleanor Roosevelt, and Army-McCarthy hearings lawyer Joseph N. Welch, Meacham brings vividly to life turning points in American history. He writes about the Civil War, Reconstruction, and the birth of the Lost Cause; the backlash against immigrants in the First World War and the resurgence of the Ku Klux Klan in the 1920s; the fight for women's rights; the demagoguery of Huey Long and Father Coughlin and the isolationist work of America First in the years before World War II; the anti-Communist witch hunts led by Senator Joseph McCarthy; and Lyndon Johnson’s crusade against Jim Crow. Each of these dramatic hours in our national life have been shaped by the contest to lead the country to look forward rather than back, to assert hope over fear - a struggle that continues even now.

While the American story has not always - or even often - been heroic, we have been sustained by a belief in progress even in the gloomiest of times. In this inspiring book, Meacham reassures us, "The good news is that we have come through such darkness before" - as, time and again, Lincoln’s better angels have found a way to prevail.

Praise for The Soul of America:

“Brilliant, fascinating, timely... With compelling narratives of past eras of strife and disenchantment, Meacham offers wisdom for our own time.” (Walter Isaacson)

“Gripping and inspiring, The Soul of America is Jon Meacham’s declaration of his faith in America.” (Newsday)

“Meacham gives readers a long-term perspective on American history and a reason to believe the soul of America is ultimately one of kindness and caring, not rancor and paranoia.” (USA Today)

“This is a brilliant, fascinating, timely, and above all profoundly important book. Jon Meacham explores the extremism and racism that have infected our politics, and he draws enlightening lessons from the knowledge that we’ve faced such trials before. We have come through times of fear. We have triumphed over our dark impulses. With compelling narratives of past eras of strife and disenchantment, Meacham offers wisdom for our own time and helps us appreciate the American soul: the heart, the core, and the essence of what it means to have faith in our nation.” (Walter Isaacson)

“Rather than curse the darkness, Jon Meacham, with his usual eloquence and surpassing knowledge of our history, has offered us all the sublime and calming reassurance that as threatening as so much of the present moment seems, Americans have weathered such storms before and come out on the other side with fresh and progressive horizons. This is a beautifully expressed and convincing prayer to summon our own ‘better angels’ to meet the obvious challenges of today.” (Ken Burns)

What listeners say about The Soul of America

A Must Read Book

This is an amazing book. As a non-american it gave me a glimpse of the politics and political minds of influential politicians from Independence to the present day. Never realised the massive role President Lyndon Johnson played in Civil Rights. Also, profoundly disappointed at so many proponents of segregation in the Democratic Party down the decades. My bad, my ignorance. Congratulations Jon Meacham, with minds like yours there is hope for USA.

This is a riveting and very instructive historical narrative and very uplifting. It shows that no matter how bad things seem today, history shows that worse has been faced and overcome over time: a positive and uplifting message for the future and future generations!
My mood now is also 5* - thank you Jon Meacham!!
(And yes I believe 100% in the importance of history in instruction)

I have read a lot of American history. I found this book fascinating and enjoyable. Most notably to see that ‘bad’ times are nothing new, that there have been worse times than the present. Also to see that we as a country and our leaders at the top can chose to follow our better or our worse angels. And that there will never be a time that both won’t be present. Well done.

Thanks! I needed this!

Jon Meacham does a heroic job of sifting through the history of the presidency and the hurdles faced by these remarkable men. It was encouraging to find that there were no perfect heroes among them. All of them made blunders they were certain to have regretted. Some held to the biases and prejudices of their times...often finding that these directions were not the ones that would stand up to the crises they faced when in office. I found new admiration for LBJ. Without him we would not have achieved the Civil Rights that serve our nation.

I wondered if the book would close with a critique of the present administration. But he did not go there. He simply left us with renewed faith that we would ultimately win the Battle for our Better Angels.

I liked Fred Sanders' reading...calm and confident. Just what the book required.

A Hopeful Reminder Of Better Angels

"One of the points for reflecting on the past, is to prepare us for action in the present." ~Jon Meacham

Gratitude: Jon Meacham's book "The Soul of America: The Battle for Our Better Angels" is a reasoned, heartfelt history lesson. A fireside chat. It gives me hope and comfort that better angels are always waiting in the wings.

It's good to be reminded of where we've been.

I've read that the book offers hope. Perhaps it does, but some of the passages sound as if the Meacham wrote on this topic to quell his own panic over the current presidency.

All in all, I enjoyed the historical review. But I would have liked a little bit more of an objective look at the Trump presidency and the people who put him in the White House.

It’s an outstanding book that reminds people that this young nation has seen dark days but it’s always sunny at the end of the day. A summer must read for those looking to go back in time when things weren’t always great and when this country was devided.

Straight up propaganda from a covert political speechwriter. Completely disingenuous. The Author pretends to want to appeal to our better Angels while in fact he is just another operative from the swamp.

more hopeful than ever.

I especially loved the last few chapters. I listened to them several times and have more love for the American Dream than ever.

Nothing short of a Masterpiece

This book carries more weight than a typical history book. From the start of the book, Jon Meachams enticing and engaging writing takes you into the minds of our nation's leaders through some of her most trying times. From the vision of our fore fathers to right wing rallies in Charlottesville, this book serves as a beacon of hope, optimism, wisdom and perfectly delivered through an amazing audible performance. This book has quite truly left me with a different perspective on the direction of our country and has given me a sense that feeling like "this is not normal" a sense of familiarity in that we have seen similar rises and risks in populism before and have still been able to overcome it and that tension and racism has always been a reaction to when we make progress in the right direction.

I really do feel better and more optimistic after listening to this book. Jon Meachem teaches us a thing or two and points out that America has been through very discouraging and even frightening-for-democracy times before. His ultimate confidence that "this too shall pass" proves contagious.

The history here may not be new to most fans of the genre, but Meachem puts them together in a new way, emphasizing the rocky road we have taken over the years toward our country's idealistic goals of unity, equality and justice. His primary argument is that Presidents have often not been leaders in that fight - few stand out as the right person to influence policy and public thinking at just the right time. But, when we have needed it most, someone has emerged from the crowd to inspire us and head us in the right direction.

His choice of examples is pretty unarguable in that most historians and citizens (regardless of political party) agree on the very best Presidents. They exercised judgment and influence - as well as charisma and rhetoric skills - in furthering the best in human inclination. Franklin Roosevelt is a notable example of a man hated by many for his social policies but still regarded as great (even by his haters) because of his unifying power through both Depression and WWII. In hindsight, it's undeniable that Democracy and capitalism would likely have been in much more danger in the 1930's without his calm courage and swift action. Hindsight and historical prospective also reinforce our appreciation of men like Washington (when Democracy was being defined), Lincoln (when we were arguably nearest to National destruction), Teddy Roosevelt (during the Industrial Revolution when capitalism and labor faced off) and Lyndon Johnson (at the height of racial tensions over civil rights).

We find ourselves in such a needy period now. Whether or not you approve of Trump, no one is citing him as a man of foresight, wisdom, or unifying rhetoric. His tendency is pretty clearly in the direction of despotism and division. Jon Meachem believes this outlook is temporary - most of us can only hope and pray that he is right!