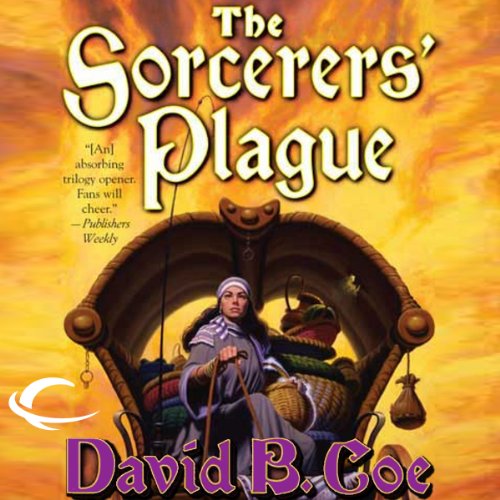 By: David B. Coe
Narrated by: Michael Page

David B. Coe enthralled fans and critics with his Winds of the Forelands, an epic fantasy full of political intrigue, complex characters, and magical conspiracy. Now he takes the hero of that series to new adventures across the sea on a journey to the Southlands. Grinsa, who nearly single-handedly won the war of the Forelands, has been banished because he is a Weaver, a Qirsi who can wield many magics. He and his family seek only peace and a place to settle down. But even on the distant southern continent, they can’t escape the tension between his magical folk and the non-magical Eandi. Instead of peace, they find a war-ravaged land awash in racial tension and clan conflicts. Worse yet, his own people try to harness his great power and destroy his family. Amid the high tension of clan rivalry comes a plague that preys on Qirsi power across the Southlands with deadly results. When the disease is linked to an itinerant woman peddling baskets, one old man takes it upon himself to find answers in the secrets of her veiled past. With wonderfully creative magic, dark secrets, and engaging characters faced with a world of trouble, Coe deftly weaves an epic tapestry that launches a richly-entertaining new saga in an unknown land

After the treats of Rothfuss and Abercrombie it was always going to be difficult to find something quite as good, this for me at least failed miserably even Michael Page who i think is exceptional struggled to keep my attention, he even sounds bored himself halfway through. sorry but no..

Would you listen to The Sorcerers' Plague again? Why?

Maybe after a break. I cycle back through my favorites from time to time

Which character – as performed by Michael Page – was your favourite?

No. The horsemen quirsi annoyed me so much a had to take a break