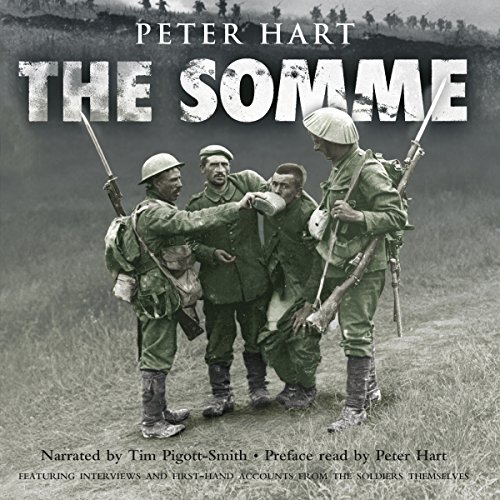 On 1 July 1916, Douglas Haig's army launched the "Big Push" that was supposed finally to bring an end to the stalemate on the Western Front. What happened next was a human catastrophe: scrambling over the top into the face of the German machine guns and artillery fire, 19,000 British and Commonwealth soldiers were killed, the greatest loss in a single day ever sustained by the British Army. The battle did not stop there, however. It dragged on for another four months, leaving the battlefield strewn with the bodies of over a million men, and all for the sake of just a few miles of land.

The Somme has remained a byword for the futility of war ever since. In this major new history of the war, Peter Hart describes how the battle looked from the point of view of those who fought it. Using never-heard-before interviews taken from the Imperial War Museum oral archives this will be a unique audio full of passion, joy, and heart rending stories.

"[Hart] has produced a remarkably even-handed account....and the first-person accounts he has unearthed are rich in vivid images." ( Sunday Times)

This facinating account of the Battle of the Somme had me totally absorbed from the first moment. Although Tim Piggott-Smith is an inspired choice as narrator it is, as both Jason and Jonathan point out in their reviews, hearing the actual voices of those who took part in the conflict that makes this a 5 Star recommendation.

Although, as Jonathan also points out, accounts of the numerous battles can lead to some confusion, I found that an internet search for a map of the Somme battlefield helped me greatly understand the (painfully) slow advance the British and Commonwealth forces achieved during the four month campaign. Highly recommended.

This is a 'must have' for anyone even slightly interested in learning more about this time. It links commentary with actual archive interviews and is certainly enough to make any listener stop, think and begin to appreciate how lucky (and how thankful to the brave) you are to be about now rather than then.

Although some of the commentary appears much the same, relating to battle upon battle upon battle, it does go some way to illustrating what happened day after day and it desbribes vividly the futility of the situation.

Perhaps a morbid subject for some but I enjoyed listening very much and would highly recommend this title.

This is a must audiobook for anybody who has a interest in World War 1. The detail is great with personal accounts from all soldiers' who fought in the great war from conscripts to top military brass and also from both sides but the best of all is to hear the actual tales from the soldiers' themselves in their own voice which gives it it's authenticity and a connection from the past that we should all never forget.

I'd heard of the "Battle of The Somme" through various sources, but never quite understood what it was all about. I now have a much clearer understanding of this part of the First World War. Hearing the eye witness accounts (narrated by the actual people who were there) really brings the topic to life. It removes the "just a textbook" feel to this very important and sadening period of history. Any time you forget what Remembrance Day is all about, listen to this and you'll be thoroughly reminded of what these soldiers had to endure to ensure our freedom & liberty.

Combines deep research with a balanced respect for all combatants. Not only uses appropriate voice actors for regional/international participants but recordings of veterans interviews. Poignant and effective

Wonderfully written, marvellously read, my 4 stars reflect the difficulty of following this in audio, a written version, or, even better, a video presenation, could have superimposed maps.
Today, General Blair apologises for Iraq, plus ca change.........

well presented and structured. with the voices of the veterans it really brings it home..

What a brilliant book, the accounts from those who fought and those who died are brilliantly used to illustrate the points made. Highly highly recommended.

this is a comprehensive and well read book, that puts you in a pensive frame of mind...

The finest account of a terrible war I have ever heard or read
Should be compulsory reading for the current generation of young
people for whom these men gave their all.