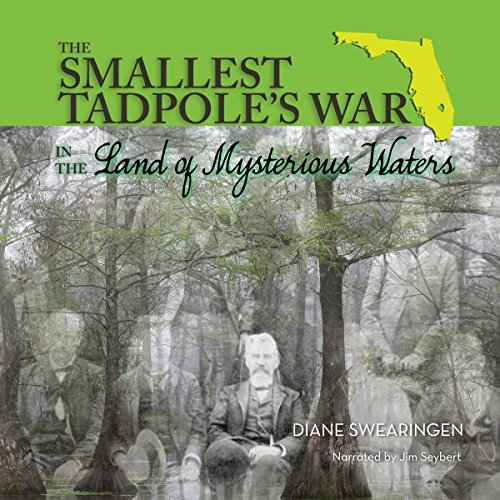 The Smallest Tadpole's War in the Land of Mysterious Waters

The Smallest Tadpole's War in the Land of Mysterious Waters

In early 1861, Florida was a rural frontier state that had joined the Union just 15 years before. Its population of 140,000 was by far the smallest of any of the states that formed the Confederacy. Nearly 63,000 of the population were African Americans, most of whom were slaves working in an agricultural-based economy. The majority of the white population was relatively poor and rural. In the 1860s, a Northern newspaper referred to Florida as "the smallest tadpole in the dirty pool of succession."

The human side of a bloody conflict

The smallest tadpole offers a glimpse into the American civil war at ground level and tells a very engaging and heartfelt story of what life was like for people going through one of the biggest events in US history. The story is delivered excellently by Jim Seybert. His Southern accent offers a level of authenticity to the tale and I felt like an old friend was telling me his life story which kept me enthralled throughout. An excellent bite size piece of history. I was given this audiobook free of charge in exchange for an unbiased review.

I enjoyed listening to this well written historical story. It had just the right amount of history woven with stories of people who lived during the time period.

This is such a well-researched story that it feels so much like nonfiction I had to double check to see that it wasn't. This gives you an account of Wakulla county Florida in and around the time of the civil war. Coming from a boy who was first was too young to join the war was stuck doing lots of chores for many families in the town because all the Men had gone off to work. This is an enjoyable read for anyone who loves civil war stories. This has little battle and more about what life was like back home. This also has historical relevance because it talks how lots of the men from Florida didn't even own slaves.

Florida's Part in the Civil War

I was given this free review copy audiobook at my request and have voluntarily left this review. This review is for the audio copy of The Smallest Tadpole's War in the Land of Mysterious Waters: by Diane Swearingen and narrated by Jim Seybert. I asked for this book because I like listening to history, especially war history with a focus on the War Between the States. This book did not disappoint. It offers a glimpse into the past showing how and why people lived as they did, the mind set and political machinations of a minority of people that end up affecting the lives of the majority. Jim Seybert did a superlative job narrating this, including his use of a southern inflection. It is a very worthwhile book to listen to and I highly recommend the book and the narrator.

Some everyday people during some hard times

This book is a very nicely done historical fiction leaning heavier to the historical side. The story starts with the focus of the book - Henry- and we follow him, his family and friends from when he’s 10 until he’s a married man. We are treated to excerpts from a diary written by the main character.
The story flows well around the facts that give insight into the times and trials during the Civil War. There is not any in-depth descriptions of the individual violence or bloody struggles- just an overview. This is a book more about the people and daily lives instead of the major battles.

This is the first book I’ve read/listened to by this author and I would listen to another.

This is the first book I’ve listened to by this narrator and I would listen to another. The character voices were excellent and the narration was well done so that the story came to life as I listened without it being obvious I was being read to.

The Smallest Tadpole is told as Loudly as the Biggest Bullfrog

I’m not a Civil War buff, but I do indulge in snippets of history. We learn war details during various history courses throuhout our education but I really liked this fictional historical acount from the perspective of a resident in of a small county in Florida. Florida had some battles, but was mostly geographically removed from many major battles. (It escaped my memory Tallahassee was the only uncaptured capitol of the south.) Historical facts about the war was ingeniously threaded as we learn about life in the mid to late 19th century. Jim Seybert is a noteworthy narrator for this gem. Enlightening and entertaining, it was easy to get swept through time to this difficult and pivotal era.

I learned a lot about the US Civil War by reading this diary that spanned 1840-1900ish. I really do recommend this story in the genre Historical Fiction. Now for the obligatory: This book was given to me for free at my request and I provided this voluntary review.

I found this little gem after almost overlooking it simply because of the seemingly odd title. Do not be fooled, this is an interesting piece of U.S. history, written from a very personal perspective, and not of general knowledge. Set in the 1860s in "the smallest tadpole in the dirty pool of succession" the story gives a unique perspective of life leading up to and after the Civil War. The narration was as close to perfect as one could get and really enhanced the listen, especially during the few, somewhat mundane, where the story slowed a tad.

This short book is an absolute must listen for all those with an interest in that historical era. I would also recommend it for anyone looking for a little something different to listen too. Clearly and entertaining way to learn something new. A review copy of this audiobook was provided by the author, narrator, or publisher at no cost in return for this unbiased review. If you found this review helpful, please take a moment to click yes below.