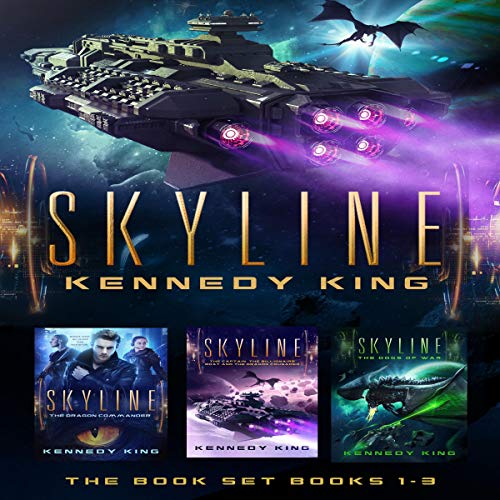 Buy the epic first half of the SkyLine Series.

It's 2350. Cold fusion, AI nanotech cops, and the SkyLine between a dying Earth and a developing Mars are parts of life.

Major General Christopher Droan has survived a crisis. It left him with trauma and a deeper understanding of his dad’s distrust for technology.

Now, all he wants is to focus on the love of his life Sheeba.

It’s a turbulent time to be a major general, even one resigned to desk work. But the calm can only last so long. When tragedy strikes Precinct 117 in Shanghai, Chris and his unit are forced to gear up again.

What waits for them in the heart of a robot with a beta personality matrix will change the planets on both ends of the SkyLine, mankind, and Major General Christopher Droan, forever.

Books in this set:

What listeners say about The SkyLine Series Book Set: Books 1- 3

Just what I was looking for. I needed a SkyLine series book to plan a trip out west. This book has everything that you need to plan a trip anywhere in the country. I was able to plan a perfect trip thanks to this book!!! A must for anyone wanting to plan a science adventure.

A very good story with twists and turns. Lots of action. Looking forward to more adventures, please! Fast paced, well researched and a good holiday listen. Amazed at all the tech details!

A well audio story that gives the listener food for thought as to what is possible these days. The story is fast moving and keeps the listener's interest throughout. Looking forward to the next one.

The book kept my interest throughout and kept me guessing on how it would end. I recommend to any one that wants an SkyLine. This,like he first book was a great experience. I found it hard to put down, but needed to sleep. Do not miss it!

Really good book and a fast listen. I enjoyed the technical aspects almost as much as the story line itself. The ending is exciting and full of action.

This book holds you from the first min to the last. Fast paced and lots of action. Can't wait for the next book in this series.

One of my all time favorites.

Anything by Kennedy King is going to be an outstanding listen! He is one of the best I have had the pleasure of listening.

loved it at first

Great book The region and characters were compelling. I thought the series was laid out well and really liked the ending.

Kennedy King is a fun audio that makes you want to come back for more. If you are a Kennedy King fan, you will not be disappointed with this book. The reason I did not rate it higher is because I think a five should be reserved for those over-the-top rare books that leave you thinking for a while. I always tell my wife I want to move to audible after listening a Kennedy King Series.

Kennedy King is a great adventure audio, his books are long, but full of worthy prose. I am listening his SkyLine Family books all the way through, and am so entertained by his imagination, history and prose.