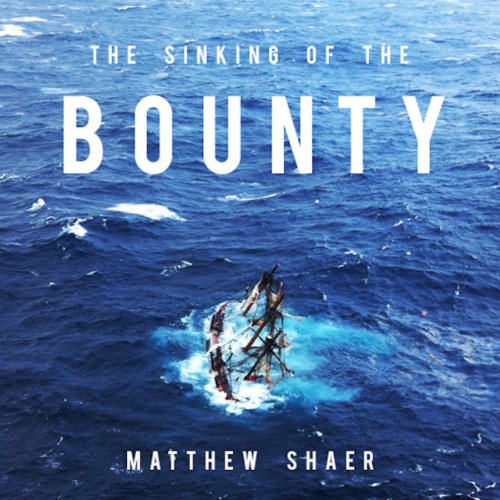 The Sinking of the Bounty

It was one of the strangest sights the Coast Guard pilots had ever seen: a tall-masted wooden ship, the kind that sailed centuries ago, capsizing in the wind and towering waves of Hurricane Sandy off the coast of North Carolina. It looked like something out of a movie - and, in a way, it was. The ship was the Bounty, a replica of a British merchant vessel of the same name whose crew famously mutinied in 1789. She had been built for a Marlon Brando film in the 1960s - and now she was sinking, her 16-person crew fleeing into the sea amid the splintered wood and torn canvas.

Was the Bounty's sinking - which left her captain missing and one of her crew members dead - an unavoidable tragedy? Or was it the fault of a captain who was willing to risk everything to save the ship he loved? Drawing on exclusive interviews with Bounty survivors and Coast Guard rescuers, journalist Matthew Shaer reconstructs the ship's final voyage and the Coast Guard investigation into her sinking that followed, uncovering a riveting story of heroism and hubris in the eye of a hurricane.

“Matthew Shaer masterfully recreates the last voyage and final doom of the Bounty, an iconic ship that collided with an historic storm off the Carolina coast. Shaer pulls you off the page and onto the Bounty itself - and then into the roiling sea - to relive a long night of terror, heroism and desperate quests for survival. The Sinking of the Bounty is a classic of the genre, beautifully told and riveting to read.” (Sean Flynn, GQ correspondent and author of 3000 Degrees: The True Story of a Deadly Fire and the Men Who Fought It)
“Few images of Hurricane Sandy's destruction were as indelible, or as surreal, as the shattered wreck of the Bounty sinking beneath the waves of the ‘Graveyard of the Atlantic.' Matthew Shaer's The Sinking of the Bounty is a powerful and riveting account of the disaster: the fateful decision to set sail before the storm, the crew's epic struggle to save the ship and then themselves, and the heroic rescue launched by the Coast Guard in the middle of the largest storm the Atlantic has ever seen. In the tradition of Sebastian Junger's The Perfect Storm, this is fast-paced and deeply reported storytelling.” (Matthew Power, contributing editor, Harper's>/i>)

What listeners say about The Sinking of the Bounty

Tragic Tale, Read by the Author

This was a wrenching tale of the sinking of the modern day ship, the Bounty. It was a custom built ship, made and used in one of the previous films covering the Mutiny on the Bounty. No one single event doomed the ship, but several questionable decisions by the Captain sealed the ship's fate as well as some of the crew. Expertly researched and well told, I listened to this book using Immersion Reading, while listening to the audiobook. The author read his own work and did a wonderful job.