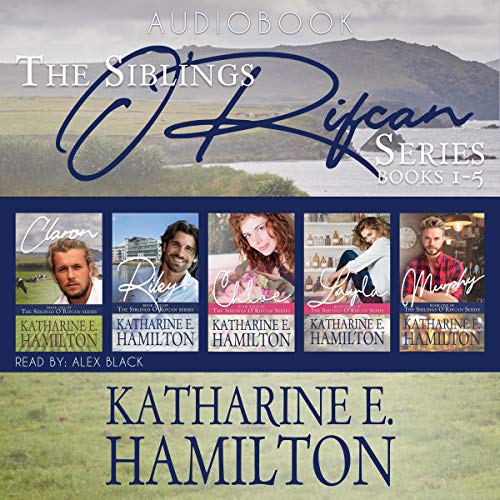 By: Katharine E. Hamilton
Narrated by: Alex Black
Try for £0.00

Tossing her belongings into a suitcase and escaping heartbreak seemed like the best idea for Rhea Conners. She’d simply travel across the ocean to visit her grandfather in Ireland and heal. Then, she’d come back. Simple. But what she doesn’t expect is to find solace and healing in the form of the O’Rifcan family. One member in particular: Claron.

Claron enjoyed his life farming the land his grandparents gifted him. He lived his life quietly and contentedly, until Rhea arrived. He’d steered clear of relationships and entanglements since his last heartbreak, but something about Roland’s granddaughter twists him up inside. Something about Rhea has him rethinking his life of solitude.

Two hearts. One chance. Can Rhea and Claron overcome past hurts to make a new beginning?

Charm, beauty, and the promise of a new adventure had Heidi Rustler eagerly flying across the ocean to visit her best friend, Rhea Conners. Heidi needed a change of scenery, a change of pace, and a little excitement, and that is the promise that awaited her in Ireland. However, Rhea’s stories of the incredible family she’d come to know intrigued Heidi the most. Particularly the stories of Riley O’Rifcan.

Riley loved his life. He spent his days traveling for work, loving on his family, and flirting with feminine faces. He never once thought about settling down. Until Heidi. The bold and beautiful woman from Texas stampeded into his world and challenged his commitment-free and easygoing lifestyle.

Two hearts. One chance. Can Heidi and Riley recognize their opportunity for a new and different kind of adventure?

Beautiful, flirtatious, and charming are just a few of the words that describe Layla O’Rifcan, and she is proud of them. She enjoys the art of flirting and entangling the hearts of handsome men with her own. But with her eyes set upon starting her new business, she might just miss the one man who could change her life for the better.

Delaney Hawkins loves his job. Yes, he may work too much, but he is happy with the direction his life is headed. All until he meets Layla O’Rifcan. The spunky O’Rifcan sister who bewitches him from the start has him trying to balance work with what he hopes to be a budding relationship.

Two hearts. One chance. Can Layla and Delaney set aside their work and ambition to take a chance on love?

Strong, sweet, and beautiful not only describes Chloe O’Rifcan, but also the flowers she works with. As her brother’s wedding approaches, Chloe finds herself neck-deep in wedding planning and projects that require the help of a dear friend.

Conor McCarthy is one of the closest friends to the O’Rifcan family, but he’s also a talented carpenter hopping from one project to the next. But when Chloe asks him to build an archway for a wedding prop, Conor finds himself working hand-in-hand with the youngest sister, and he can’t help but be impressed by Chloe’s skill and her sweet heart.

Two hearts. One chance. Can Chloe and Conor progress from family friends to more?

Grit, determination, and independence had Piper O’Beirne setting her roots in Galway. The successful manager of one of the hottest pubs in the city, she never dreamed of moving or starting over. Until Murphy.

Murphy O’Rifcan loved his work. He spent all his time grooming his pub to be the best in County Clare. However, the hectic demands of the pub had him looking for help from the one person he knew he could trust, but the one person he knew did not want to move to Castlebrook. He found his professional pursuit of Piper twisted along the way and he wished Piper would accept the job for other reasons. Him.

Two hearts. One chance. Can Piper and Murphy learn to work together at the pub and in love?

What listeners say about The Siblings O'Rifcan Series: Books 1-5

Love the story and wonderful narration

I thoroughly enjoyed this series. The O’Rifcan’s are wonderful. The country is beautiful.

The narrator did a wonderful job portraying all the characters and I really enjoyed listing to his Irish lilt. It made for a compelling listen.

I would definitely recommend.

the story was good not so much for the narration