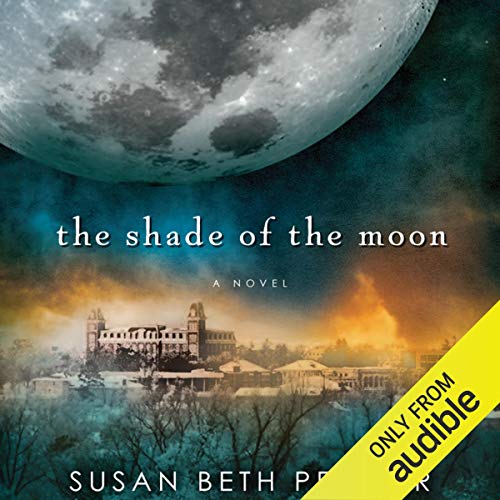 The Shade of the Moon

The Shade of the Moon

The eagerly awaited addition to the series begun with the New York Times bestseller Life as We Knew It, in which a meteor knocks the moon off its orbit and the world changes forever.

It's been more than two years since Jon Evans and his family left Pennsylvania, hoping to find a safe place to live, yet Jon remains haunted by the deaths of those he loved. His prowess on a soccer field has guaranteed him a home in a well-protected enclave. But Jon is painfully aware that a missed goal, a careless word, even falling in love, can put his life and the lives of his mother, his sister Miranda, and her husband, Alex, in jeopardy. Can Jon risk doing what is right in a world gone so terribly wrong?

Worse than if an asteroid really did hit the moon.

I remember reading "Life as We Knew It" when it was released a few years ago. I was in high school, a few years older than Miranda, and I remember not being able to put the book down. After finishing, I begged my mom to read it as well and just like me, she was sucked in.

Just this week, I decided I was going to listen to it again, That's when I realized... THERE IS A SERIES!!! I used all of my audible credits to buy books 1-3 and listened to them one after the other, Each book progressively getting worse. By the time I got to book 4 I already had a bad taste in my mouth. The characters had lost any depth they had, the story line was a little dry and John is a little shit. I wanted to like this book so bad. I really did. I just found myself bored. I wanted more of Miranda and Alex. Matt and Sil. Instead, I got Jon? A rapist who says "I love you"? No thanks.

The narrator, bless him, was the worst choice for this book. Hearing him say "sorry" in the most Canadian accent felt like nails on a chalk board.

I don't write reviews often but this book genuinely almost ruined the whole series for me.

Read the first three books. Stop there. Do not pass go. Do not collect $300. Do not waste your time.

A huge letdown for one who loves the series.

As a fan of the other three books in Susan Beth Pfeffer's The Last Survivors post-apocalyptic/dystopian young adult series, I'm sorry to say that this novel provided a most unsatisfying end.

This review could easily run away with me, so I'll limit myself to what I see as the two biggest problems of the novel.

First, the premise. I honestly don't know why this wasn't a standalone novel. It makes no sense in the context of the earlier three books. It's set only four years -- four years -- after the natural disaster that defines the series. (A meteor knocked the moon off its orbit and caused catastrophic climactic changes and a series of natural disasters.) Somehow people in that short a period of time have divided so completely into the privileged few in the enclaves and the oppressed drudges, or "grubs," that the elites view the majority as genuinely less than human. (This happens even though membership in an enclave is based on rather random criteria, so that even Ivy League Ph.D.s are living as grub domestics, and nuclear families may be split between the enclaves and "grub" towns.) This genuinely defies belief, as do the living conditions described in the enclaves. I would think that, with the massive climactic changes and challenges, clean drinking water and viable foodstuffs and disease would still be foremost concerns, not playing soccer and choosing nannies. Considering Pfeffer's emphasis in earlier books about how communities fracture and individuals turn against each other in times of crisis, it requires more than a mere suspension of disbelief to go along with the idea that large numbers of people, many of privileged backgrounds themselves, all agreed in concert to accept the rule of the few and subside into slavery so quickly.

Second, the main character. Jon was the baby of his family, the coddled one for whom others sacrificed. That said, in the previous novels he was portrayed as a good-natured and normal boy. Now at seventeen he's one of the most dislikeable protagonists I've come across. I don't simply mean that he's annoying, erratic, weak-willed, and difficult to empathize with, though he is all of these things. He also does despicable acts, from helping to burn down the school where his mother teaches to trying to justify attempted rape and sexual intimidation, all the while winning the affections of a visionary, courageous young woman. (Her lasting attraction to this easily bullied coward is never explained. It's a baffling mystery.) When his semi-redemption comes, it's unconvincing. It's troubling, too, because he seems to be content in excusing away some of his most disturbing behavior.

Matthew Josdal's narration made an already grating character even more whiny and difficult to endure.

There are hints of interesting commentary here, from an implied critique of gated communities to a more overt critique of the celebration of brute violence and groupthink in sports. The corruption that's rife in the administration of Jon's enclave suggests chilling insights into how bureaucracies behave. Unfortunately, these critiques read more like a series of brief rants strung together between one atrocity and the next (and there are serious atrocities committed in this novel, let me assure you) rather than a nuanced, integrated narrative. For example, I would point to Octavia Butler's Parable of the Sower for a more complex and sophisticated dystopian study of the gated community, among other subjects. Ironically, although Butler's heroine is both the daughter of a minister and the founder of a new faith, Parable comes across as far less preachy than does Shade of the Moon.

As a standalone novel I would have found this problematic, but as the final conclusion to a compelling and well-loved series, it's an even greater letdown.

Book 1 was ok if you can get past the horrendous audio narrator.

Book 2 was good if you can deal with another bad audio narrator—a man this time. If you have any sense (which apparently I didn’t), stop at book 2.

Book 3 was pretty bad. Miranda goes from hating Alex to being madly and passionately in love with him and he with her. There is no reason for her to even like him based on the text in this book. At least in book 2 (Alex’s story), he’s generally likeable and when he’s not, you understand why. As well, as others have stated, people act completely out of character.

Book 4 has another horrible audio narrator, and he’s the BEST thing about the book. Even if people could go from normal life to this absurd mindset in four years, the fact than Jon (Miranda’s younger brother) loses 15 year’s of decency, common sense, logic, morality is equally ridiculous. Now there are the elites “clavers” (short for “enclavers”) and “grubs”—the laborers, normal people who now the clavers think are “animals” and treat them as such.

Just about every character in this book has once again morphed into something different than they were (good or bad) with absolutely no explanation. But Jon has turned into such a an awful person, I kept wishing someone would murder him rather than having other characters suffer and/or get killed off. Jon’s “redemption” was not enough to save this book.

I would have liked to hear more detail at the end. However, it's still an on ending and leaves room for short stories that can be added in later. 😉

Of the series, this is by far the worst. I should have just skipped it. I didn’t care for the narrator and the story just didn’t seem to have enough body or reasonable storyline.

Its a good book well written. It just wasn't what I was expecting since it went from the main two Alex and Miranda to suddenly the point of view of the brother John 2 years later so for me it wasn't as good as the first 3. They definitely should have gotten a different Narrator though. It is very off putting to go from plain American accents to a Canadian one. Like did John come from a different family all of a sudden saying sooory and aboot. Its really off putting.

Wanted to love it

I read this series when i was 16 so I wanted to reread it as an adult (23), and i was disappointed. The first book is amazing but it gets worse and worse after that. You realize there are no positive relationships, everyone that is in love should actually hate each other because all they do is argue. Them all going their separate ways I find hard to believe, different houses yes, but willingly leaving each other no. Killing the Dad off seemed lazy to me, they never really go into detail over what happened and it really player no major significance other than they end up without a father, I get not everyone can survive but she went killing crazy in this story. Seeing the world through Johns eyes, he was spoiled when everything happened but for him to grow up and me a terrible person because “julie haunts him” is pathetic, i rolled my eyes so much but I just wanted to get through the story, I miss seeing through Mirandas eyes especially since a great deal at the end is ABOUT Miranda. The claver vs grub aspect is sorry. I find it hard to believe that adults and teens that knew what life was like before would succumb to a slavery type set up and lose self identity in 4 years. Having a functioning community that had to deal with gangs and outsiders trying to take what they have would have been much more realistic for this situation. How the parents ended up in this, unsatisfying due to the fact they survived sooo much and this is their ending??? No real conclusion on Miranda and her baby either. Switching the Grubbs was also unnecessary to the plot. So reading this as a teen that knew nothing of the real world I give it a 10/10, reading this as an adult who knows something of this world 5/10. Also a deep grown mans voice reading as john is flat out creepy.

I was listening to this whole book hoping at the end Jon would be killed or outcasted by his family.

he WAS the reason Julie died. he DID assault her.

I regret purchasing this book. Loved the first three books in series this one was a total let down. Painful, but not in a good way, to listen to.

Predictable, didactic, and unbelievably terrible writing. The characters were shallow and the dialog was mindbogglingly trite. The narrator was the worst I've ever heard.