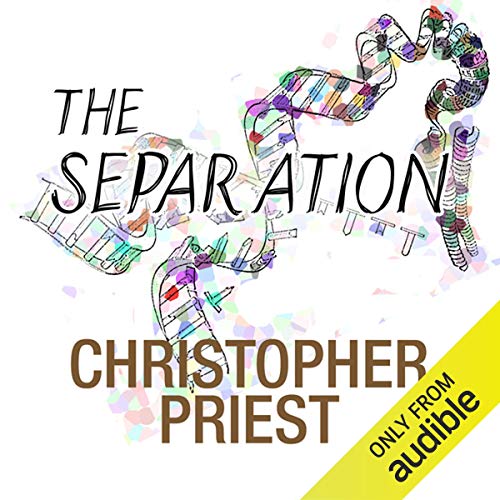 By: Christopher Priest
Narrated by: Joe Jameson
Try for £0.00

The Separation is the story of twin brothers, rowers in the 1936 Olympics (where they met Hess, Hitler's deputy). One joins the RAF, and captains a Wellington; he is shot down after a bombing raid on Hamburg and becomes Churchill's aide-de-camp. His twin brother, a pacifist, works with the Red Cross, rescuing bombing victims in London. But this is not a straightforward story of the Second World War: This is an alternate history. The two brothers - both called J.L. Sawyer - live their lives in alternate versions of reality.

In one, the Second World War ends as we imagine it did; in the other, thanks to efforts of an eminent team of negotiators headed by Hess, the war ends in 1941. The Separation is an emotionally riveting story of how the small man can make a difference; it's a savage critique of Winston Churchill, the man credited as the saviour of Britain and the Western World; and it's a story of how one perceives and shapes the past.

What listeners say about The Separation

SPOILER ALERT - DON'T READ ON IF YOU WANT TO DISCOVER THE ENDING BY LISTENING.


I quite liked the idea, really intrigued by the implications of the "Peace with honour" that had been at the heart of the story.

The quick move away from the intial narrator to the two main protagonists was a shame, I liked that author and was sorry to lose his voice.


At the end, with one life was revealed as "lucid imagining" - for which read "dream" the resolution was a schoolboy approach - infact one I employed when I was 12 I think. Very dissappointing.

One for the fans

A brilliant idea - twins in alternate histories. I feel this is one that would be better on the page than the spoken word as, at times, it was very confusing. But maybe that was the intention. Christopher Priest is a genius story-teller, his writing is flawless, but sometimes the journeys he takes you on lead you right back to where you started, with all the questions and mysteries still unanswered.

But...I did enjoy the journey!

The lost moment of turning

Christopher Priest is a writer of meticulously constructed, Borges-esque literary puzzles, wherein narrators are unreliable, story elements sometimes contradict each other, and everything is open to different interpretations. In his “Dream Archipelago” books, there’s a secondary world, complete with its own geography and nation-states, that’s treated as being as true, if not more true than the reader’s reality.

An alternate reality also factors into this novel, but it’s one in which the Second World War ended differently, with Britain seizing a chance for an early separate peace with Germany, at a point when it became clear that continued fighting was in neither country’s interest. This isn’t much of a spoiler, since the novel opens in 1999 of this alternate timeline, just as a historian comes across a strange discrepancy in the records.

The novel that follows plays games with the two parallel realities, giving us the stories of two twin brothers, both called J.L., who compete together in the 1936 Olympics in Berlin, where a significant rift forms between them. In the years that follow, one brother, Jack, becomes a bomber pilot for the RAF, which the other, Joe, becomes a conscientious objector and serves as an ambulance man for the Red Cross. First, we hear Jack’s version of events, from his own journal, but other accounts that follow, including Joe’s, call some of its events into question.

For Jack, the war progresses and ends as it did in our world, but he finds himself haunted by his brother’s principles, as the Allied campaign of vengeance becomes more brutal. In Joe’s own story, he’s instrumental in peace negotiations between the British government and Nazi deputy fuhrer Rudolph Hess, leading to an armistice between Britain and Germany in 1941. In real life, Hess flew to Britain claiming to have peace terms, but was disowned by the Nazi government. But was something else going on?

The separation between the two timelines becomes somewhat muddled, in a way that hinges on confused identities, and Priest introduces a number of puzzles into the story, including the suggestion that several key figures besides the two J.L.’s have their own doppelgangers. I’m not sure I picked up on all the clues.

If you’re familiar with World War Two, though, it’s all pretty fascinating. The posturing Churchill and the creepy Hess are both convincingly written, with suggestions of motives more self-serving than met the eye. Priest plays with the idea that both realities and people contain more than one layer, and that one might come to the fore doesn’t negate the presence of the others. Perhaps a peace between Germany and Britain was closer to being a reality than the history books, with their convenient hindsight, lead us to think. Whether that’s true or not, it’s interesting to think about. Unlike some alternate history fiction, this novel challenges the conventional wisdom that our current course was the “best” one, even if the other course wasn’t better in every sense. In Priest’s “separate peace” vision, Britain retains more of its prominence and some portion of Europe’s Jews survive. Russia, meanwhile, suffers a worse fate, and the US becomes a paranoid, backwards place with a broken economy (nervous laugh here). Both Jack and Joe are haunted by doubts as to whether they did the right thing.

Christopher Priest’s novels aren’t for everyone, but I become more of a fan with each one. The lack of a conventionally structured plot, the ambiguity of the ending, and the too-convenient reliance on journals and letters in this novel will frustrate some readers. Others will appreciate the puzzles here and Priest’s finesse at bringing them forth. Audiobook reader Joe Jameson can be commended for handling a range of accents -- he nails Churchill’s.

Terrific alternate history / fantasy set (mostly) in the UK during WW2, from the author now best known for the Victorian magician fantasy The Prestige.
Overlapping with real historical events (the 1936 Berlin Olympics, the London Blitz), the story sees the identical twin protagonists cross paths with Hitler, Hess and Churchill. Some fantastic descriptions of the Blitz and RAF bomber raids over Europe, the novel also features some fascinating fantasy elements and an intriguing motif of twins, doubles and events repeating. The narrator does a great job of voicing the different characters (especially Hess and Churchill). Highly recommended.