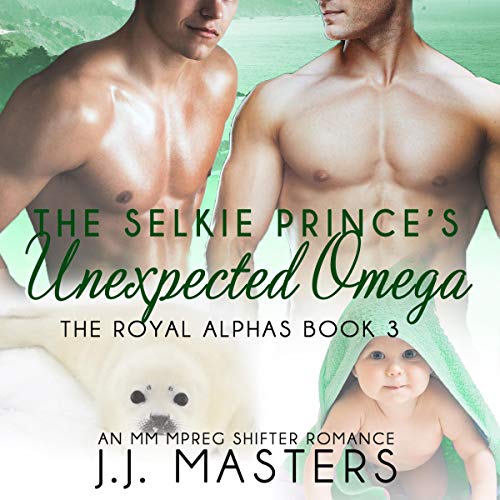 An alpha claim. A possible heir. A Selkie prince whose mistake might just be what the fates intended.

Zale, the third alpha-born son of King Solomon, is concerned. His youngest brother, Caol, has been spending time with an unbonded omega. Being a responsible alpha, Zale feels it’s his duty to warn the omega Finn before he and Caol get into trouble, especially since Finn had only been brought to the colony by their father in case his oldest brother’s fated mate couldn’t conceive.

However, when Zale goes to Finn’s quarters to have a word with him, he isn’t expecting to discover what he does: the omega in the throes of oestrus and begging for an alpha’s assistance. Finn has nowhere else to go. Not only unwanted by his own family, his previous alpha perished in a tragic accident.

So for the past two years, the omega has relied on the King of the North’s generosity, even if it means he may end up as a surrogate for one of the alpha-born princes. Or even worse, the king’s sixth mate. But when the Prince Zale comes upon him during his heat, Finn demands relief from the alpha. Although afterward, has to live with the guilt. Now, he might not only be carrying the prince’s son, he may have very well ruined Zale’s chance to find his true fated mate.

Note: A 58,000-plus-word m/m shifter mpreg story, this is the third book in the Royal Alpha series. Due to the “knotty” times in this book, it is recommended for mature listeners only. While it can be read as a stand-alone, it’s recommended to listen to the series in order. And, like all of my books, it has an HEA.

I loved the story of Zale and Finn! We were first intrducded to Finn in book one he was brought in for a possible omega for Zale's brother.. Zale's dad has kept him for two years. Finn is in osterous when Zale omes looking for his brother at Finn's. Well he can't resist Finn in that state and has to mate with him! The drama with Douglas the beta servant to the king syarts from that point on.

This book keeps you on edge and rooting for Zale and Finn! I am blown away with the narrator John Solo and all the charachters he can do! Anothe awesome book by JJ Masters

Wow, this was a great addition to The Royal Alphas series. Besides Finn and Zale finding out they were fated mates, there were so many others things going on in this story. Secrets were revealed, most of which threw the Royal Princes and their Omegas for a loop. The weasel, Douglass, was at it again. Did he finally get his due or was allowed to continue overstepping his bounds? I love how close the Royal Princes are to each other and how protective they are of the Omegas.

Now, back to our feature couple, Finn and Zale. They've known each other for two years but, at no time during those years, did they know they were fated mates. How could that be? What purpose did the fates have for keeping them apart? Boy, am I glad they found each other though. The two of them were so good together, and provided some pretty steamy scenes. The story does end in a cliffhanger. Although the cliffhanger isn't with Finn and Zale, but with what Caol found out about his family. What!?! I will be anxiously waiting for book four!

The Selkies Princes Unexpected Omega is Book 3 in this series is a m/m menege romance. The author has this ability to build incredible characters and always growing storyline that is a great rollarcoaster ride. I loved the story and the great preformance.

Another great addition to the series! I love these alohas and their omegas ! John Solo adds the perfect voice to this story.

Zale and Finn - finding each other

4.5 stars
These stories just keep getting better and this story focuses on the relationship between Zale and Finn. Zale is the third born to the King of the North who is now tasked with finding his fated mate and surprisingly enough finds him in Finn. As the narrator weaves the story, the emotional rollercoaster of Finn’s inner turmoil when expressing his feelings about his family is enough to break one’s heart. Once again Douglass is up to no good and listeners will wonder if he will finally get his due or not? There are still secrets and a cliffhanger with Caol that will leave you wanting more. J. J. Masters is a virtuoso when it comes to penning an omega love story and I cannot wait to see what comes next….
I volunteered to listen to a copy of the audiobook and my opinions are my own.

This series is so good. I'm totally enjoying the stories. I really like these brothers, the love, and the support, that they give to each other. (Love It) I am totally invested in them and each of their stories. and can't wait for the next book to comes to adubile. The characters and stories are well defined and the awesome job that JS does bringing each one to life, is amazing. I love listening to his narration of books. jj masters was really blessed with the gift of writing and story telling. This book series just keeps you wanting more. If your looking for a good shifter/alpha/omega/love story, that keeps each story, and brother, making you to cant wait for the continuation, I highly recommend this series!👍

Loved it. A bit of suspense during the middle and has me looking forward to the rest of the series. Can't wait