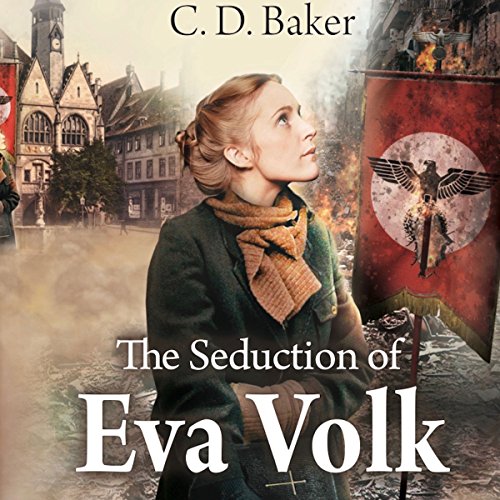 The Seduction of Eva Volk

In World War II, American soldiers were shocked to discover thousands of German POWs carrying New Testaments. Civilized men serving Hitler? Impossible, or so one would think when juxtaposed against jackbooted Aryan supremacy and the Holocaust.

The astonishing truth, however, is that the majority of Germany's population willingly supported Hitler, so powerful was the seduction and so profound the blindness.

Never before undertaken in a novel, The Seduction of Eva Volk is an inside look at the not-so-simple paradox of a Christian culture proclaiming faith in Führer with bullets and bombs.

Through the eyes of young Eva, the alluring charm of the Hitler movement is personified in a lover. Desperately seeking wholeness in her broken world, she is quickly swept away by the thrilling passions of love and war...until she finds herself facing the agonizing consequences of lost sight.

"I was blind, but now I see" brings us to the gut-wrenching climax that challenges the boundaries of hope and redemption.

What listeners say about The Seduction of Eva Volk

Looking from a different perspective

This is the second book I’ve read/listened to by this author (previously The Pursuit of Leviathan) and I would listen to another.

This story was quite interesting, very believable, and thought provoking.
It follows Eva from when she’s a young girl (and a tragic event happens) and Hitler is just starting to have influence, to well after she’s married and Hitler dies. We see the slow progression of the Nazi party- starting with the initial positive changes for the German people, to the downward spiral into a war torn country dealing with war shortages, cruelty by their own neighbors, and increasing concern over their Führer’s intentions / involvement in horrendous events. To me, parts were reminiscent of the frog in the pot of boiling water- increase the heat gradually and they are blind to what’s really happening until it’s too late.

This is the first book I’ve listened to by this narrator (Michael Wolf) and I would listen to another. He did a wonderful job narrating this book. His portrayal of the characters added to the book making listening a pleasant experience.

There are no explicitly described sex scenes but the topic of rape and marital abuse does arise. There is no excessive violence or swearing, but there is some descriptions of the war but not terribly detailed.

Wow, this was great! What an interesting story about Eva as she grows up during and after Hitler's madness. I was taken away, back in time, to a place where unimaginable horror and unimaginable love intertwine. I'm fairly new to this genre, but really enjoyed this story! Very, very powerful story, and wonderful job by both author and narrator. Highly recommended! :)
I was given this free review copy audiobook at my request and have voluntarily left this review.

The characters are compelling and believable, and I found myself identifying with Eva even as I felt the horror and revulsion at what she came to believe. The research was impeccable This is a book that will stay with me a long time.

There are scenes of attempted rape and of marital abuse, and I think there should be a warning about that in the description. Other than that I have no criticisms to make. The story is excellent and well worth your time.

Captivating fiction that stirs the heart and challenges one’s thinking

This was my first Baker read. Excellent! The narration was well done with no technical issues. Baker’s attention to detail enables the reader/listener to feel the weight of the story line. Looking forward to reading more of his work!