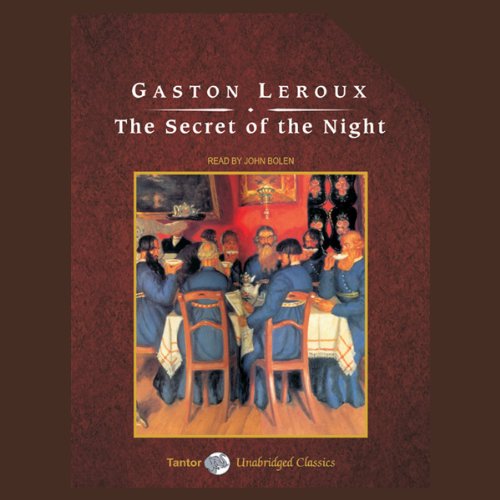 The Secret of the Night

The Secret of the Night

The surviving Nihilists have condemned the Russian General Trebassof to death for the crimes he and his troops committed against the revolution. Three attempts on his life have failed, but the Czar is determined to keep him alive.

The Czar assigns the redoubtable, French detective reporter, Rouletabille, to the case. It quickly becomes apparent that one of the General's own retinue is in league with the assassins! Why?

What listeners say about The Secret of the Night

Would you try another book written by Gaston Leroux or narrated by John Bolen?

Would not listen to this narrator ever again.

What could Gaston Leroux have done to make this a more enjoyable book for you?

The narration was just too horrible to listen to the whole book, making it impossible to judge on the merits of the content. The accents are laughable and the reader seems bored at all other times; you can sense the places where they edited out the heavy sighs. If you're interested in the character, Audible also has the Mystery of the Yellow Room, which is well read and intriguing.

The narrator does all the accents in some kind of Peppe Le Peu (the skunk). If you can get past that, the story is pretty good. Not nearly as good as Mystery of the Yellow Room, but worth reading. It too takes some overdramatic turns, but it eventually comes together. There are so few Gaston Leroux works that I recommend it.