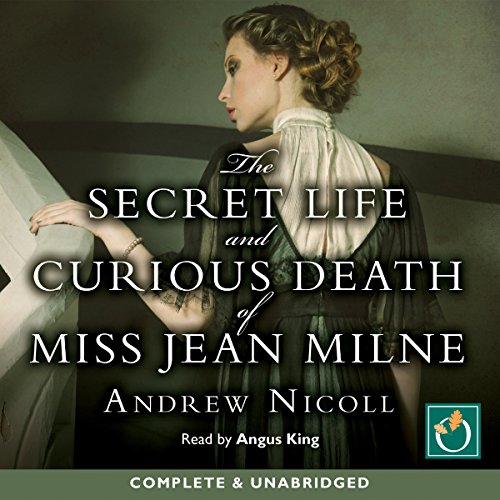 The Secret Life and Curious Death of Miss Jean Milne

By: Andrew Nicoll
Narrated by: Angus King
Try for £0.00

A hundred years ago, the true story of the brutal murder of Miss Jean Milne in a small seaside town captured the imagination of the whole country. A wealthy spinster who lived alone in a crumbling mansion, Miss Milne appeared to be the very model of respectability.

But behind the facade, Miss Milne was living a secret life. Why was this quiet spinster tied up in her own home, tortured and brutally murdered?

Now, using newly released evidence from police files, eyewitness testimony hidden for a century and long-forgotten newspaper reports from the scene, Andrew Nicoll has brought the case back from the dead to reveal the secrets of the little town where Jean Milne was murdered.

"A mystery that touches the heart, with characters caught in a world that's harsh but trembles with tender emotions. A beautiful story." (James Naughtie, BBC Radio 4)
"Nicoll takes a true story and builds it into a twisting piece of prose with an unexpected shift towards the end." ( Daily Express)
"Beautifully done." ( The Sun)
"The sense of setting and era are spot on, and the dusky streets of Scotland are suitably spooky." ( Heat Magazine)
"A superb read, the sort of book that keeps you compulsively turning pages." (undiscoveredscotland.co.uk)

Less well known than the Oscar Slater/Marion Gilchrist affair, which later precipitated the downfall of the detective responsible for this investigation, the true life unsolved murder of Jean Milne is recounted by the local police sergeant as it unfolded
very convincingly.
A local laddie, he sees the arrogance and mistakes of his superiors, but surprises us with the solution, or at least, his version of it.

It's rare I would rate a mystery so highly, this one really surprised me. I was gripped, great performance beautifully written

I enjoyed this story. . Unusual story line but keeps you listening , gets you right into the time period.
Never would have guessed the ending