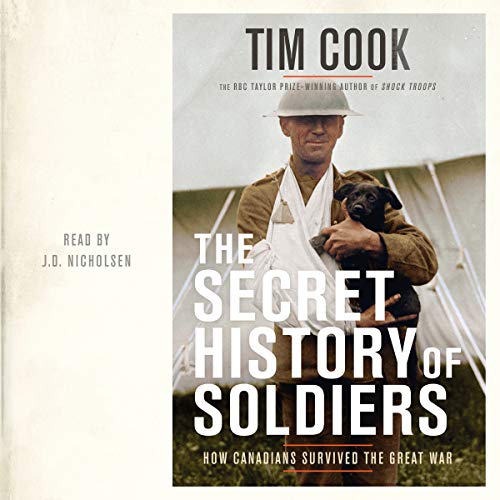 The Secret History of Soldiers

The Secret History of Soldiers

There have been thousands of books on the Great War, but most have focused on commanders, battles, strategy, and tactics. Less attention has been paid to the daily lives of the combatants, how they endured the unimaginable conditions of industrial warfare: the rain of shells, bullets, and chemical agents. In The Secret History of Soldiers, Tim Cook, Canada's foremost military historian, examines how those who survived trench warfare on the Western Front found entertainment, solace, relief, and distraction from the relentless slaughter.

These tales come from the soldiers themselves, mined from the letters, diaries, memoirs, and oral accounts of more than 500 combatants. Rare examples of trench art, postcards, and even song sheets offer insight into a hidden society that was often irreverent, raunchy, and anti-authoritarian. Believing in supernatural stories was another way soldiers shielded themselves from the horror. While novels and poetry often depict the soldiers of the Great War as mere victims, this new history tells how the soldiers pushed back against the grim war, refusing to be broken in the mincing machine of the Western Front.

The violence of war is always present, but Cook reveals the gallows humor the soldiers employed to get through it. Over the years, both writers and historians have overlooked this aspect of the men's lives. The fighting at the front was devastating, but behind the battle lines, another layer of life existed, one that included songs, skits, art, and soldier-produced newspapers.

With his trademark narrative abilities and an unerring eye for the telling human detail, Cook has created another landmark history of Canadian military life as he reveals the secrets of how soldiers survived the carnage of the Western Front.