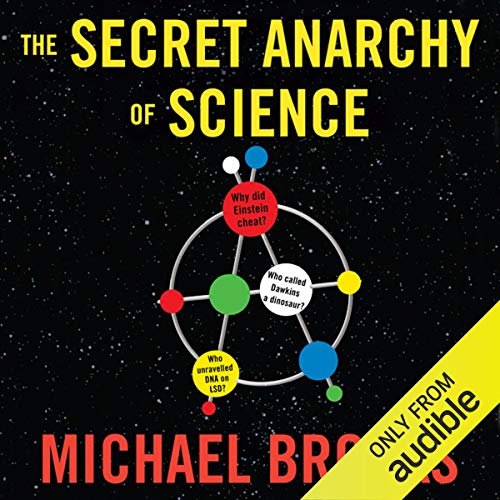 For more than a century, science has cultivated a sober public image for itself. But as best-selling author Michael Brooks explains, the truth is very different: many of our most successful scientists have more in common with libertines than librarians.

This thrilling exploration of some of the greatest breakthroughs in science reveals the extreme lengths some scientists go to in order to make their theories public. Fraud, suppressing evidence, and unethical or reckless PR games are sometimes necessary to bring the best and most brilliant discoveries to the world's attention. Inspiration can come from the most unorthodox of places, and Brooks introduces us to Nobel laureates who get their ideas through drugs, dreams, and hallucinations.

Science is a highly competitive and ruthless discipline, and only it’s most determined and passionate practitioners make headlines - and history. To succeed, knowledge must be pursued by any means: in science, anything goes.

What listeners say about The Secret Anarchy of Science: Free Radicals

Never Let's you down

I have read (listened) to all of Michael Brooks books. all fantastic! his insight into the world of science and his out look on the universe and understanding of the world around us will leave you hooked. write more please.

A real joy to listen too as Matt Addis is very clear and engages you to carry on listening especially with what can be a quite dry subject. I will be looking for other books he has narrated. The book is also a fascinating insight into the world of science and Michael Brooks de-constructs the subject very well for non-scientist.

Even more relevant in the age of COVID-19

We are constantly being told that our politicians are “following the science” This fascinating, sometimes shocking and inspirational book is more relevant now as a contribution to our public conversation about science than when it was first published.

An interesting book about some of the biggest scientific minds and their achievements both in science and in self-promotion (or lack thereof). I especially liked the discussion on ethics boards and their place in science today, as well as the peer-review system. To put some of the stories of research individuals and teams into the context of the environments that they operated in, was entertaining as well as thought provoking. Read very well too!

Michael Brooks. Where to begin? What breathtaking foolishness. What astonishing lack of insight disguised as cleverness. This is essentially a little exhortation for the politicalization of science. His wit and tropes are all the tired rants of the little world of University brainwashing. We need no rules. Drugs open the mind. Little pedestrian souls cannot comprehend the genius of those who are beyond the normal restraints of order. He is an advocate for the ubermenche! Churchhill who he disparages in this cloudy narcotic haze once warned of the "perversion of science" by the Nazis. He was speaking of the use of science as a tool of the state, funded and certified and policed not by peer review but by the power of the "apparatus" of more enlightened persons. Brooks does not address this problem because he's never thought about it. Science today is almost entirely an enterprise underwritten directly and indirectly by government and it's extended organs of big education. Science has become so enthralled by government money that it has lost objectivity and has become an exponent of politics. And poor useful idiot Michael Brooks either cannot see this or has been purchased by this corruption. Just more psuedo-proto-gramschian jibberish to pull everything by default into the state. Why? Because the smart people know best. Just ask the "anarchist" Michael Brooks. He's snickering as he blows things up and pulls down tired ideas of objectivity and order. He is making the world better. Until he's pushed into an oven built by scientific socialism. What an idiot!

I Wish I Could Get My Money Back

I only gave this one star because I can't give it zero. The author makes a weak attempt at "shaking the foundations of science," but to me this read like the essay of someone who is a little ticked off that he couldn't make it as a professor.

In the first chapter he makes the assertion that Apollo astronauts brought a camera to the moon and took the "earth-rise" picture directly because some hippie started a campaign about needing to see a picture of the earth. Are we really to believe that NASA had otherwise planned on sending people to the moon without a camera?

He goes on and on about how various scientists take psychedelic and other drugs and claim it enhances their scientific productivity.

I couldn't make it any further. Save your money and your time.

I've enjoyed a few of the author's books. This one is questionable. It has some good stories, but I feel like the book should have been about how True scientific discovery is nearly always a product of inspiration / revelation from an unseen source. This is a truism that he does cover quite a bit in the book (hence 3 stars), but the anarchy theme never really works. I think the anarchy is a fitting word for the anal retention of the scientific establishment, primarily from those individuals who are more concerned with government entitlements and their own ego. The clowns with bow ties , who have never created a thing in their lives... thats where the anarchy is, not in the individuals who actually discover.... people like Newton, .... but I digress, it's probably worth the cost for the various stories.

What could Michael Brooks have done to make this a more enjoyable book for you?

The story is mostly sensationalization of facts. The general point is incorrect. Very disappointed in this book. There is a lot of exciting history in science without making science out to be a cult.

A 10 hour advertisement for taking drugs

This book is an explanation for why people don't trust scientists and why they are the butt of jokes in movies. They're human, they make mistakes, they take drugs. If this was your only view of scientists you'd think they were all a bunch of pot smoking, acid dropping, drug addicts. I wish Michael Brooks would have given more examples of scientists that were novel and innovative that weren't tied to "bad" behavior. Otherwise, I enjoyed the book.

What's Going on Behind the Curtain!

Okay, this book is all about the airs that science has put on since WWII. True, these airs have serve to put science on a pedestal and potentially highten its credibility, but it has been at the expense of its applicability.

Divulging and presenting the irregularities and controversies of science serves to both humanize the field and reveal that far from a preserve of esoteric knowledge. Science, regardless of its presence in academia or industry, is just as competitive as any other field of endeavor.

The stories are compelling, the performance is strong, and the message is clear. Science can no longer play it safe. Its future, and the future for all of us, depends on taking chances.

What would have made The Secret Anarchy of Science: Free Radicals better?

The main idea of this book is that science proceeds in erratic and unpredictable ways and is
not the boring rational collection of nerds that is the perception in the common public.

This is not a new idea, it has been written about by Kuhn's "the structure of scientific revolutions" (also available from Audible). My hope when selecting this book was that it will elaborate on Kuhn's work, and make it current, and maybe more digestible.

My disappointment was profound. Not only is there no mention of Kuhn's work, but the
level of the description is that of the gossip page. The only difference being that gossip
pages rarely discuss scientists.

Granted, many scientists are marginally insane, adulterers and thieves. Many find their inspiration in dreams or mystic beliefs. However, these tendencies are generally human
and not specific to scientists. The scientific method has nothing to say about the sources
of inspiration, it only speaks of the method by which new theories are verified. Experiments have to be devised that reject the current theory with high statistical significance and these
experiments have to be repeatable by anybody with the resources to repeat the experiment.

This book might be interesting for those who want the dirt on scientists. Others, stay away!

Having the author write fiction instead. He confuses science with scientists and cherry picks a few examples to make his predetermined point. He misses out on the 99% of scientists who do things differently than the few he chooses to represent. Time and again he conflates process with the personal issues of individuals and seems to think universities run labs without strict controls. The Wild West he describes was dead a few decades ago. This book is a sensationalistic view of a few oddballs that misses the point altogether. Don't bother.

The narration, however good, cannot save this book.

What character would you cut from The Secret Anarchy of Science: Free Radicals?