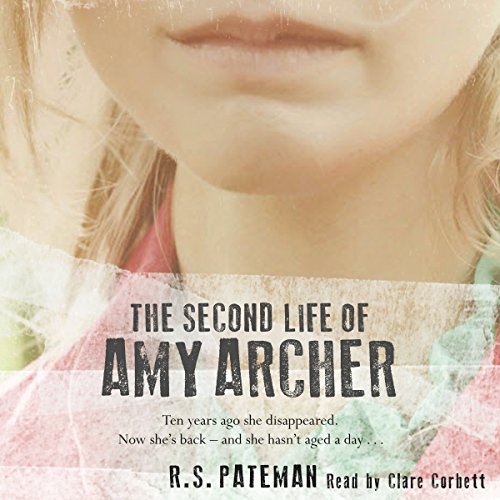 The Second Life of Amy Archer

Ten years ago she disappeared without a trace...now she's back.

On 31st December 1999, ten-year-old Amy Archer went missing from her local playground. Her body was never found and the lives of her parents, Beth and Brian, were torn apart. On the 10th anniversary of the disappearance, Beth is alone, still struggling with the enormity of her grief and the horror of not knowing the fate of her only child. But the fear and confusion have only just begun, and Beth's world is turned upside down when a stranger knocks on her door, claiming to know what happened to Amy.

Beth is introduced to a little girl who is the uncanny double of her missing daughter, who knows things that only Amy would remember: The name of her favourite toy, the place where she scratched her initials, what Beth likes for breakfast. But this can't be Amy, she hasn't aged a day...

Now Beth is forced to question everything she has ever believed in, and push her faith and her sanity to the limits, if she is to find out the truth about what happened to Amy.

What listeners say about The Second Life of Amy Archer

What an amazing, unexpected listen. This is an original, gripping and compelling book that kept me guessing throughout. If like me you are a fan of Lottie Moggach or SJ Watson I would highly recommend this outstanding debut novel which is beautifully narrated by Clare Corbett.

People who never learnt that a book needs a beginning, a middle and an end.

Would you be willing to try another book from R. S. Pateman? Why or why not?

I would not be willing to read another book by this author, the premise of the story was interesting but the book overall was a massive disappointment. There was no conclusion, there was quite a lot of repetition and I was left with a feeling of "what, is that it?"

Have you listened to any of Clare Corbett’s other performances? How does this one compare?

I have not listened to any other of Corbett's performances but I would, she was an excellent narrator.

Frustration and disappointment. Of course there were moments of sadness because of the subject matter of the book and it did make you think but I expected more.

I genuinely can't understand why people have given this listen such rave reviews.

I did not think I would like this book due to its re-incarnation content - but was pleasantly surprised and intrigued - It had me gripped so much that I did not want it to finish.

I just couldn't put this book down 'so to speak😀). Utterly brilliant story telling and read wonderfully as always by Clare Corbett. I would recommend this to anyone and am actually envious of those just about to listen to it as you have hours of story to enjoy ahead of you. I just wish there were more by this author. Can't wait for the next........

What made the experience of listening to The Second Life of Amy Archer the most enjoyable?

The story, the few characters that populate it and the narator was excellent.

I wasnt sure what I was expecting with this book but it immediately caught my imagination. It was a bit different from the run of he mill fantasy stuff which I am not always a big fan of. Its the story of a mother trying to cope ith the dissapearance of her daughter 10 years before. Its a mystery story of the very best kind. I actually gasped in shock a few times.

What does Clare Corbett bring to the story that you wouldn’t experience if you had only read the book?

I believed in the characters. Each one had a distinctive voice and it was almost like listening to a radio drama. She was excellent

Yes. The book hints at the possibilities and reasons for various events happening and I certainly didnt see the ending coming. But I also wanted to savour how good it was and felt quite gutted at the end because of the ending and also because it was finally over

I would highly recommend this book to anyone who wants to listen to a good story and something a little bit different. Its certainly the best book I have listened to for a very long time and only the second, from the hundreds I have listened to, that I have ever commented on.

This kept me guessing

Really good listen with amazing narration. Frankly i can't imagine anyone else do such a great job at a variety of voices - male/female/young/old. Good supernatural thriller with endless twists. Would buy other books by this author and this narrator.

Something a bit different, thought provoking...

This is a very interesting story - along with the main character, you don't know from one moment to the next what is true - is this supernatural or a con? I did really like that the book never gives too much away too soon, so you are keen to keep listening to find out what exactly is going on... is Esme a reincarnated Amy? Is it all a hoax? And an ending that leaves you mulling the book over for days after. Narration is generally good, while the male voices are a little irritating, this is more than excused by Esme's brilliant Mancunian accent. A good book.

First of all - the narrator was superb. She did all the accents excellently and she did fear frighteningly. I kept thinking I knew everything on at least 5 different occasions. I was usually wrong. I am not sure why I couldn't give the story more stars. It is possible that I found it so disturbing that I am not sure I could say I "enjoyed" it. Very well written though and I will be looking for more from both the narrator and the author.

I enjoyed the idea that the book was based on, I found that it did go one a bit in the middle and I became a bored.

I really like Clare Corbett so enjoyed hearing her read,

errrrr yes i would

This was hard work

I'm not sure why, I couldn't feel any enthusiasm for this. It was so uninspiring that I was frequently distracted from the narrator and had to replay segments numerous times to try to keep up.

I have begun this novel 4 times now and feel I have given it my best shot.