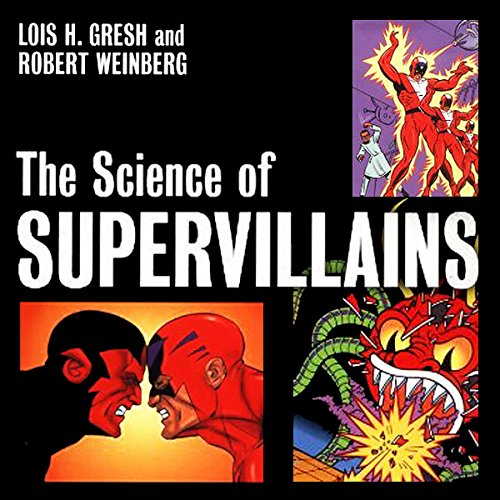 The Science of Supervillains

The dynamic duo of comic book debunking has returned with the obvious choice of sequel following The Science of Superheroes. Also returning is that book’s voice artist, award-winning nonfiction narrator Oliver Wyman. Gresh and Weinberg have their methods firmly in hand, as does Wyman. This chapter by chapter analysis of the scientific plausibility of the comic book universe’s most famous bad guys flows logically and smoothly thanks to solid research and energetic delivery.

The examination of evil technological applications and superpower innovations escalates from simple biology and chemistry to more complicated physics and mathematics, and concludes with speculation on other dimensions and parallel universes. Giving equal time to the two juggernauts of the comic book industry, DC Comics and Marvel, Wyman does a terrific job of amusing with character quotations and then maintaining interest throughout the scientific explanations. Never glossing but always keeping the mainstream listener in mind, the book provides adequate analysis to satisfy curiosity without drowning the listener in facts.

The two largest chapters are naturally devoted to the most long-standing and heavy-weight supervillains: Lex Luthor of Superman for DC Comics and Magneto of X-Men for Marvel. Are Luthor’s mad scientist inventions possible? What are the limits of Magneto’s abilities? This is a book for pop culture lovers, but also for people with a general interest in science. Highlights include a laundry list of possible lethal agents for Poison Ivy’s lipstick in Batman, light speed calculations of the Silver Surfer’s travel time in The Fantastic Four, and nanotech revelations for The Lizard in Spiderman. Science geeks especially will appreciate the more complex treatments in the last two chapters: a discourse on anti-matter related to special series Crisis on Infinite Earths, then an explanation of parallel universes for the tag-team of Bat-Mite and Mr. Mxyzptlk related to special series World’s Finest Comics.

Comic books fans will be surprised to learn which supervillains are credible and which are not. Science fans will be glad to see some practical, although evil, applications of the most recent theories. No matter what part of the book is most of interest, Wyman’s reading is sure to capture both the attention and the imagination. —Megan Volpert

The authors of The Science of Superheroes now reveal the real genius of the most evil geniuses. Ever wonder why comic book villains, such as Spiderman's bionic archenemy Dr. Octopus or the X-Men's eternal rival Magneto, are so scary and so much fun? It's not just their diabolical talent for confounding our heroes, it's their unrivalled techno-proficiency at creating global mayhem that keeps comic book fans captivated. But is any of the science actually true? In The Science of Supervillains, authors Lois Gresh and Bob Weinberg present a highly entertaining and informative look at the mind-boggling wizardry behind the comic book world's legendary baddies. Whether it's artificial intelligence, weapons systems, anti-matter, robotics, or magnetic flux theory, this fun, fact-filled book is a fascinating excursion into the real-world science animating the genius in the comic book world's pantheon of evil geniuses.

Lois Gresh (Scottsville, NY) and Bob Weinberg (Oak Forest, IL) are the authors of the popular Science of Superheroes.

What listeners say about The Science of Supervillains

A Decent Follow-Up But...

The Science of Supervillains is a decent follow-up to The Science of Superheroes. I was happy that this time they decided to stick only to comics in the superhero genre and left Disney characters out of it.
It only got three stars because at times I felt like the authors were really stretching in order to fill space. For instance the Batman villain Poison Ivy does not have and never claimed to have the powers of the plant Poison Ivy. It is merely her supervillain name. I don't think a 10+ minute discussion on the dangers of the plant poison ivy was at all necessary. The worst part is I kept thinking with all the supervillain questions this is taking up valuable space in the book and making it so another villain was left on the cutting room floor.
Also some of the book, much like the first one is now out-of-date. This however is not the fault of the authors as science changes all the time and when you put something about technology in a book, it is bound to be out-dated quickly. I would love to have an update version though.
Also if a third book is to be made, perhaps they could ask fans of superheroes what their questions are and cover those.
All-in-all not a bad book, but coul have used a lot of editing for relevancy.

this book does my head in, but I love it so much - same with science of superheroes. thank you for your work+

What would have made The Science of Supervillains better?

It was just out of date. Science has changed so much since this book was released. It is now irrelevant. Plus, it has some strong attacks against religion that I personally found insulting.

What was most disappointing about Lois H. Gresh and Robert H. Weinberg ’s story?

It felt like a book that anybody could have written with a little help from Wikipedia. No new ideas were presented, and far too often the authors went off on irrelevant tangents.

Would you be willing to try another one of Oliver Wyman’s performances?

Yes. He did a passable job. Maybe a little too much emphasis and enunciation.

It had a great deal of potential. Maybe uber-fans or scientists would find it enjoyable.

Authors: leave politics and personal beliefs out of your books, and you will be better off in the long run. Alienating your fan base is not a recipe for success.