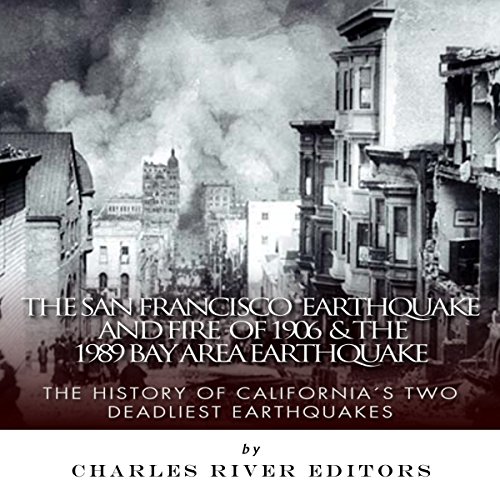 The San Francisco Earthquake and Fire of 1906 & the 1989 Bay Area Earthquake: The History of California's Two Deadliest Earthquakes

On April 18, 1906, most of the residents of the city of San Francisco were sound asleep when the ground started to shake around 5:15 a.m., but what started as fairly soft tremors turned into violent shaking in all directions. The roar of the earthquake unquestionably woke up residents, at least those fortunate enough not to be immediately swallowed by the cracks opening up in the ground. The earthquake lasted about a minute, but it had enough destructive force to divert the course of entire rivers and level much of what was, at the time, the ninth largest city in America.

Unfortunately for San Franciscans, the worst was yet to come. During the earthquake the city's gas mains and water mains were ruptured, which had the effects of starting a number of fires and preventing the residents from being equipped to fight them. Without water to truly fight the blaze, the city's officials actually resorted to demolishing buildings in hopes of containing the fires, and witnesses reported seeing San Franciscans trapped in the burning buildings being shot by authorities instead of letting them burn alive. The fires lasted three days, and by the time they were done, 80 percent of the city was in ruins, about 60 percent of the residents were homeless, and an estimated 3,000 to 6,000 were dead. In fact the fires were so devastating that contemporary San Franciscans called the disaster "The Fire".

Although the resulting fires may have done the most damage, the widespread destruction made clear to city leaders that new buildings would need better safety codes and protection against subsequent earthquakes. The city reinforced new buildings against earthquakes and fixed surviving buildings to better deal with future earthquakes.

What listeners say about The San Francisco Earthquake and Fire of 1906 & the 1989 Bay Area Earthquake: The History of California's Two Deadliest Earthquakes