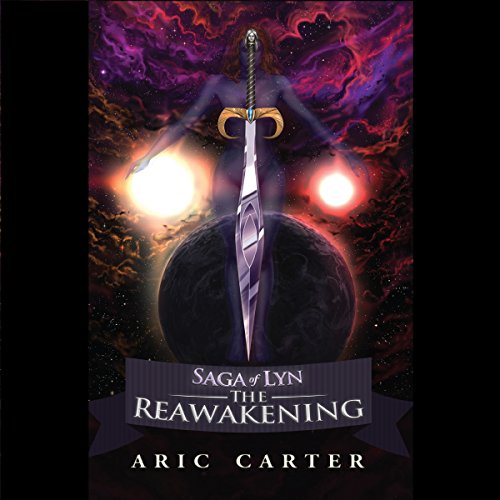 The Saga of Lyn: The Reawakening

The Saga of Lyn: The Reawakening

The Saga of Lyn: The Reawakening is a compelling tale of a simple man’s adventures as he seeks justice for the murder of his wife and daughter, only to find that his entire world is threatened. When a mysterious visitor destroys jovial Tegain Hostler’s tavern, killing his beloved wife and daughter, Tegain is devastated. Not knowing how to pick up the pieces of his shattered life, he turns to his friend, the trader Karl Dunmire, who comes upon the wreckage the following morning. Karl, a former Marshal in the Royal Wayman Dragoons, advises him to travel to the next-largest town to seek legal assistance in tracking down and bringing to justice the murderous villain. Karl agrees to accompany Tegain on this trek. Ever the trader, Karl sells Tegain a battered and rusty old sword that he swears will clean up to a fine instrument of protection. Little does he realize that the sword is unusual in a variety of ways.

During a nighttime attack by a Grimble, a creature thought to exist only in the frightened imaginations of children, Tegain is amazed to find that the sword can cleave the beasts with a single blow. As the two friends continue along their way, they find that other villages are being plagued by mythical beasts, as well, and when Tegain refuses to give up his sword in one such village, Folsum, he is forced to flee while Karl is imprisoned. While Tegain seeks to discover the cause of this mayhem, Karl quietly befriends and secretly begins training his captors. His training and Tegain’s courage, along with new friendships, will soon be required as they once again join forces to face down demons from their people’s past that now threaten their future. Carter has peopled a richly-drawn pseudo-medieval world with believable, well-fleshed characters. This sweeping tale proceeds at a rapid pace, and initially seemingly random details are later revealed to have great significance.

What listeners say about The Saga of Lyn: The Reawakening