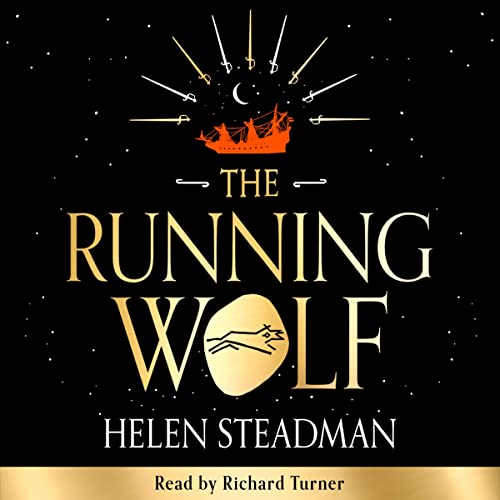 By: Helen Steadman
Narrated by: Richard Turner
Try for £0.00

A tale of swords, smuggling, and sedition...published by Impress Books December 2020.

When a smuggler from Solingen in Germany finds himself imprisoned in Morpeth Gaol in the winter of 1703, why does Queen Anne's powerful right-hand man, the Earl of Nottingham, take such a keen interest? At the end of the turbulent 17th century, the ties that bind men are fraying, turning neighbour against neighbour, friend against friend, and brother against brother.

Beneath a seething layer of religious intolerance, community suspicion, and political intrigue, The Running Wolf takes us deep into the heart of rebel country in the run-up to the 1715 Jacobite uprising. Hermann Mohll is a master sword maker from the German city of blades, who risks his life by breaking his guild oaths and settling in England. While trying to save his family and neighbours from poverty, he is caught smuggling swords and finds himself in an English prison facing charges of high treason.

Determined to hold his tongue and his nerve, Mohll finds himself at the mercy of the corrupt keeper, Robert Tipstaff. The keeper fancies he can persuade the truth out of his prisoner and make him face the ultimate justice: hanging, drawing, and quartering. But in this tangled web of secrets and lies, just who is telling the truth?

The Countryman Magazine said of The Running Wolf: "The author gives a fascinating insight into the difficult decisions that people must make during times of community suspicion and political intrigue. As Hermann's mother tells him, 'You have steel running through you, but you must bend to survive.' An intriguing plot, vivid characterisation and a keen eye for historical detail make this an enjoyable read."

What listeners say about The Running Wolf