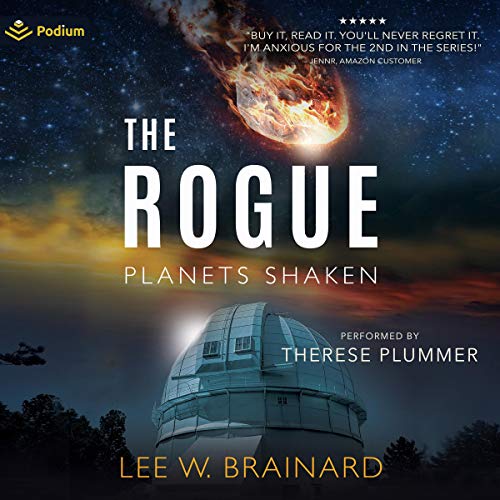 By: Lee W. Brainard
Narrated by: Therese Plummer
Try for £0.00

"Men's hearts shall fail from fear...for the planets of the heavens shall be shaken" (Luke 21:26).

When rookie astronomer Irina Kirilenko discovers a planet-size comet in the Kuiper Belt on a collision course for Mars, she first faces stonewalling from the Minor Planet Center, then coercion and stricture from NASA. They press her to embrace an ingenious reinterpretation of her discovery and ban her from talking about it.

It slowly dawns on her that the government is fostering a massive conspiracy to keep the public oblivious to the truth - Earth is facing an existential threat. Unwilling to be silenced, she recruits fellow astronomer Ariele Serrafe to evaluate her discovery, placing both in the crosshairs of government agents.

Set in a dystopian vision of the near future, The Rogue, the first volume of the Planets Shaken series, weaves the threads of biblical prophecy, ancient history, government conspiracy, and electric universe theory into a thought-provoking, tensely plotted thriller - one that asks us to reconsider the nature of the universe and the destiny of the world.

For anyone who enjoys apocalyptic, bible prophecy, Christian fiction.

What listeners say about The Rogue

Interesting, believable characters and gripping plot. Thought provoking. Lots of science, but you don't need to be a scientist to enjoy this book.

This is an excellent read! Without giving the plot away there are several passages with technical descriptions of the pending astronomical disaster. These passages are not hard to follow. Nevertheless even I could understand that if a comet which is approximately 3/4 the size of Mars comes close enough to hit it a catastrophe is going to happen. The government's extreme measures in handling the security of this situation adds to the frustration of all involved. There is a lot of room here for a good series and I look forward to the coming installments.

Book was very intriguing and well written from both a current state of US government and a scientific point of view.

Book was clean no swear words.

I liked the story line - it actually sounds believable. The narrator does an excellent job with the voices. I especially appreciate the absence of foul language and so-called "adult situations". Thanks Lee and Therese!

Looking forward to the next installment

Even though this book was listed in science fiction, which this book isn't, it was a great surprise. There was science in the book, but it was current science. Both he story and the performance were great. The characters were realistic and made reasonable decisions based on their situation. I hate it when a character makes a decision that a 2 year-old wouldn't have made. The story moved along at a good pace and I found myself rooting for the good guys. And there's no blasphemy in the book. Do yourself a favor and get this audiobook.