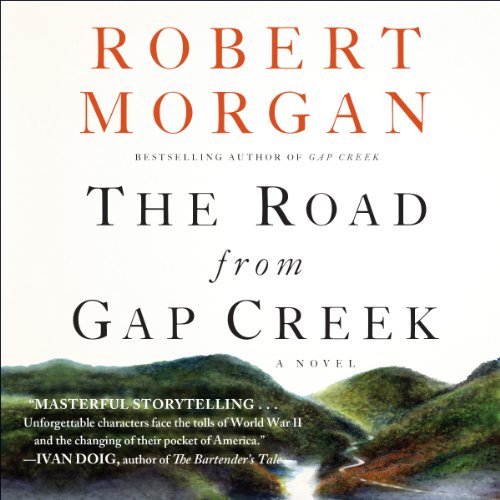 The Road from Gap Creek

When Gap Creek was published in 1999, it became an instant national best seller, attracting hundreds of thousands of readers to the story of a marriage begun with love and hope at the turn of the 20th century. Set in the Appalachian South, it followed Julie and Hank Richards as they struggled through the first year and a half of their union. But what of the years following? What did the future hold for these memorable characters?

The Road to Gap Creek answers those questions, as Robert Morgan takes us back into the lives of Julie and Hank as well as their children, seen through the eyes of their youngest daughter, Annie. Through Annie we watch the four Richards children create their own histories, lives that include both triumph and hardship in the face of the Great Depression and World War II.

Far more than a sequel, The Road from Gap Creek is a moving and indelible portrait of people and their world in a time of unprecedented change, an American story told by one of the country's most acclaimed writers.

"What a writer, and what a novel!" (Ron Rash, author of Nothing Gold Can Stay)
"Another powerhouse novel of his people, with their virtues and failings, wins and losses, loves and sorrows." (Daniel Woodrell, author of Winter's Bone)
"This book must be read for its broad, sagacious wit as well as for its power to convince us of extraordinary courage seen in ordinary life." (Elizabeth Cox, author of The Ragged Way People Fall Out of Love)

What listeners say about The Road from Gap Creek

Sometimes sequels do not live up to the original. Narration was fine, but the start lacked the emotion and excitement of Gap Creek.