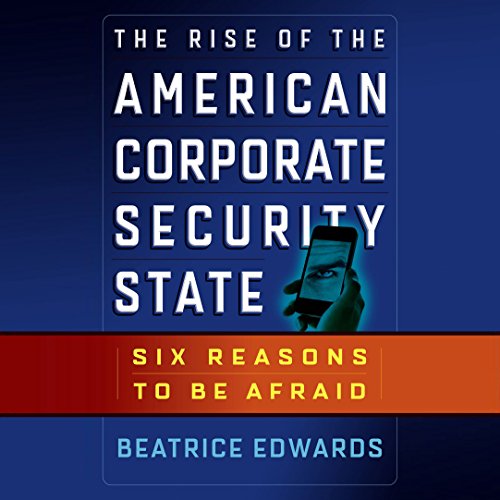 The Rise of the American Corporate Security State

Six Reasons to Be Afraid
By: Beatrice Edwards
Narrated by: Suzanne Toren
Length: 4 hrs and 18 mins
Categories: Non-fiction, Politics
5 out of 5 stars 5.0 (1 rating)

The Rise of the American Corporate Security State

In the United States today we have good reasons to be afraid. Our Bill of Rights is no more. It has been rendered pointless by heavy surveillance of average citizens, political persecution of dissenters, and the potential of indefinite detention now codified into law. Our democracy and freedoms are impaired daily by government control of information, systemic financial corruption, unfettered corporate influence in our elections, and by corporate-controlled international institutions. The Constitution of The United States that has shielded us for more than 200 years from the tentacles of oppressive government and the stranglehold of private wealth becomes more meaningless with each new act of corporate-ocracy.

Behind a thinning veneer of democracy, the Corporate Security State is tipping the balance between the self-interest of a governing corporate elite and the rights of the people to freedom, safety and fairness. The consequences of these trends and conditions are devastating. We are submerged in endless war, and the wealth produced by and in the United States skews upward in greater concentrations every year. The middle class is under financial attack, as Washington prepares to loot Social Security and Medicare to finance the insatiable war-making and profit-taking. Repression descends on a people slowly at first, but then crushes quickly, silencing dissent. According to the author of The Rise of the American Corporate Security State, Beatrice Edwards, our task now is to recognize the real reasons to be afraid in 21st century America, and address them. Our early steps in the right direction may be small ones, but they are important. They are based on the principle that we, as Americans, have a right to know what our government is doing and to speak openly about it. Creeping censorship, secret courts, clandestine corporate control are all anathema to democratic practices and must be corrected now, before this last chance to redeem our rights is lost.