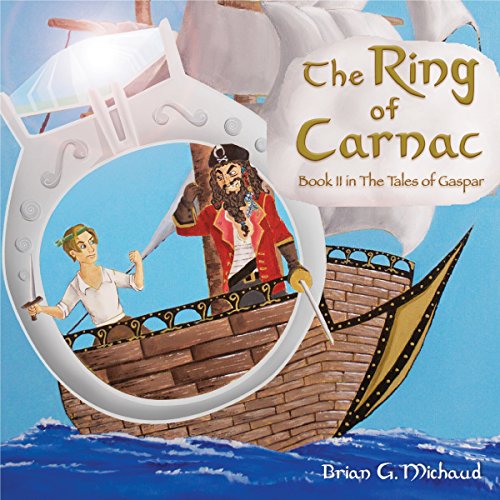 The Ring of Carnac

The Ring of Carnac

Ahoy, mateys! If you're scared of pirates, witches, and goblins, read no further! But if you're a brave soul, come aboard for the ride of your life! It's an adventure on the high seas for Alamin's wizarding apprentices, Kay and Jerra, but it's definitely not a pleasure cruise. They are in a race against time to stop the witch, Krellia, from releasing an ancient evil from its thousand-year-old prison. Only the Ring of Carnac holds the key to stopping Krellia and her pirate and goblin minions. Unfortunately, the ring has been missing for hundreds of years, and the one person who may hold the clue to the ring's whereabouts an odd, reclusive wizard who lives on an island far to the south. Alamin promises to protect his young apprentices on their journey, but, when Kay and Jerra become prisoners aboard a pirate ship where magic doesn't work, their adventure seems like it will end before it has hardly begun!

Entertaining read for fantasy lovers of all ages

I'll admit that fantasy with goblins and wizards is not my usual choice for reading material, but since I had read the previous book in this series (The Road to Nyn), I decided to give this one a chance. I would say that this book is geared toward the middle-grade reader, but it is still entertaining for adults as well. In fact, any fantasy-lover will enjoy the world of Gaspar. I listened to the Audible audio edition narrated by Fred Wolinsky. Though Wolinsky is not my favorite narrator (due to a strange cadence in his &quot;narrator&quot; voice), he is still very gifted at created unique voices for each of his characters. I'm rather impressed by the range of voices he can do. Overall, a fun and entertaining read for all-ages-fantasy-genre-lovers.

Kay, Jerra, and all of their friends are back as they must stop the mean witch from setting lose the fire elemental and destroying everything. But they need the ring to stop her the only problem is it has been lost for hundreds of years and the clock is ticking, will a obscure clue from one of Alimin's crazy wizard friends help them?

To say that this book has non stop action is not enough to do it justice, the action really never ends in this book and the suspense at times you can cut with a knife. I had the audio narrated by Fred Wolinsky and he sucks you in to the world and brings you along as part of the team, and at times you really wish you could help them in their quest. Mr. Wolinsky's voices for each of the character is awesome and you will come to love each and every one of them as friends they will become.

Having listened to the first book in the series, I was looking forward to listening to this book as well. A lot of times the second book in a series drops in quality, but not this time! This book was just as good as the first one! I don't feel like you need to read the first book before this one, but I highly recommend it. It has a lot of back story that will help you get into this one easier.

This book is mostly geared towards younger children, but I highly recommend it for the whole family. If you are planning on taking a road trip with the whole family, this would be a great story to listen to! Brian's writing style can appeal to most age groups, it's light and funny at times. There were quite a few times that I laughed out load while listening to this!

Fred Wolinsky did another amazing job with the narration!! He has a broad range of voices and no one ever sounds the same! Thank you Fred for making this a fun book to listen to!!

Another All Ages Adventure from Michaud!

I liked the sequel even more than the first! Kay, Alamon, and the gang are back and this time they tangle with pirates, spies, wonkey wizards, and more evil doers. This book is great for kids just starting to read chapter books. Michaud presents a story that is accessible to the youngest readers but still approaches tough topics like betrayal and grief. I think it is essential to all ages fiction that we not underestimate the capability of children to begin pondering mature themes in the safety of such a work of fantasy. The book isn’t just for kids, as no all ages fantasy truly is. Are you an adult? Pick up a copy to read to your little buddy. He could use a break from tv.

I listened to this story on audible any time me and my nine year old son took a ride. It started with a three hour drive to Lake George to enjoy the last week of summer vacation. As Kay and his adventurers traversed their world questing for a ring, the fam and I journeyed to school, ran weekend errands, and birthday partied. Sometimes my wife rode along. She pretends like she doesn’t care, but I caught her asking for plot fill-ins more than once on this book! My toddler even joined in with some Teelock imitations.

I was given a free audible code at my request and have voluntarily left a review. Any review. That fact that it’s a good one is because the book is good. Which has nothing to do with how awesome I am. You’ll have to find that out for yourself at LARC-SciFi(dot)com. You can read my review of Michaud’s first novel, the Road to Nyn there.