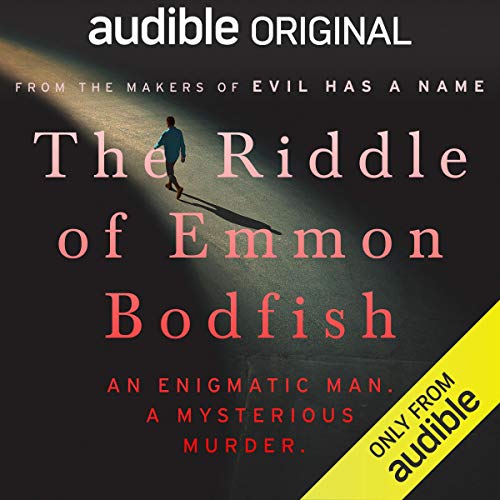 The Riddle of Emmon Bodfish

What listeners say about The Riddle of Emmon Bodfish

A well written account and telling of an extraordinary person in an extraordinary story. Love anything to to with Paul Holes crime analysis as his passion for his work is second to none. Jim Clemente is a fab narrator. RIP Emmon.

I enjoyed this overall it's narrated well and is very interesting.

I appreciate this gives a bit more clarity on an interesting mystery, especially for those involved but it leaves too many open questions at the end.

I only realised how short this was towards the end and quickly guessed it was going to leave me with many questions.

If you want a clear ending with the outcomes wrapped up, this probably isn't for you.

Its like a great TV show that permanently ends mid-season leaving you with a thousand questions.

I write this in a way to avoid any spoilers. There are
many voices that cover the investigators, friends, and professionals involved. This production, doesn't just cover your typical true crime story and all the events and clues as they develop. this also covers a profound understanding and separate investigation into the mental frame work and psychological profile of the victim and some other people too. I was in tears in the 5th episode listening to the investigator sympathetically unravel some of the victims history. It really makes you think about the past, and what you choose to do with it. I'll say no more but if you like true crime, this is one of the best.

Well presented, loads of detail, reality is stranger than fiction. Will listen to this again

Why is this marketed as a true "trans" murder?
It is so obvious that this man's / woman's sexuality problems have NO relevance to her murder. So why do you keep pushing the word trans is our faces everywhere?!!! The victim was beyond creepy and had eccentric beliefs, according to her own diaries. The most plausible theory is that she staged her own death exactly as she wanted according to her diaries.

Well read but while a sad story despite what sounds like a interesting topic turned out quite repetitive and dull.

this could have been three thirty minute episodes, rather than lots of varying length. There's a lot of repetition and dramatic interpretation of what is, ultimately, an unsolved and now likely unproveable case. Good contributions from various people but overall it comes across as an attempt to sensationalise and overcomplicate an admittedly strange death, by turning it in to something conspired at by many.

I really enjoyed listening to this audiobook. Would highly recommend to anyone that is in to true crime.

I trust Jim Clemente wouldn't narrate something which wasn't sound. A well told, rich story of fascinating people with ample levels of torment and the drive to grow beyond it.

really enjoyed this but would have preferred less but longer chapters. all in all I would recommend

This moved me immensely. I couldn't stop listening though I only chanced upon it. I appreciate the respect with which Emmon was treated and how his story was neither exploited nor raked for some political agenda. Thanks for a wonderful listen.

Loved it. I think I could listen to Paul Holes read the phone book. Great story and hope that they are able to find the real killer(s).

To me, Emmon being TG didn’t seem relevant to his murder. I’m not sure why it’s brought up repeatedly. And that’s the tone of the whole piece really.

It’s a simple case of “guy murdered for money” presented as a big mystery(it isn’t). Some of it is just silly, like the authors theory of 2 murderers with identical shoe size, wearing the same shoe (come on!)

I appreciate the dedication of all involved. Such a tragedy how persons can be completely destroyed by childhood torture. Also tragic is the way Eammon passed on the same kind of soul destroying treatment to his own son.

The listener becomes an eyewitness.

An extraordinary non-fiction account of a murder that includes fascinating threads involving Druids, messages coded using symbols associated with runes, the FBI and other law enforcement entities, and a brilliant victim who also happens to be a transgendered mother. The author weaves this account in a manner that quickly transforms the listener into a role as an eyewitness to the events. Highly recommended.

I appreciate that this was a podcast about a cold case, but I expected a little more mystery in the case itself - not a single, consistent suspect. I found Emmon Bodfish to be a mentally ill man who wished for his own murder and got his wish - it was hard to feel sympathy for him, or connection. I wish I hadn’t listened.

There are rabbit holes within rabbit holes, throughout this compelling, unsolved murder case. And while (to date) no definitive, provable solution has been found, it's still a fascinating story - presented here in a solid, well-produced series.
At the time of Emmon Bodfish's murder, I lived just 19 miles away, and yet never heard a thing about the case. That makes the tale all the more intriguing to me. I'm guessing it probably made a blip on local news, but then as layers were peeled back in the investigation, the news just quietly dropped the story.
If as a listener, hearing a solution to the crime is a "make or break" factor for you, this may not be your thing. However, if you are more about the mystery, and if you like being fed pieces of an incomplete puzzle that send your mind down a path of possibilities that keep you up at night, this may well be very much your thing.

Just no there, there

Simply, there isn't much of a mystery here. Certainly not enough to warrant 11 episodes of a presentation. There are some social issues which may rub sensitive conservative types the wrong way, but nothing that a a good story (had it existed) couldn't have overcome. That being stated, the whole project did seem a bit performative, using the unconventional life of the title character as a crutch to hold up a weak story.

Hard to top this one

A compelling victim. Layers and layers to this podcast. Like the investigator in this case, I want to know more about Emmon Bodfish, why he was killed, and who killed him.

Masterful reenactment of a mystery

The telling of the story by those evolved help bring home the reality of this tragic event.
thank you for putting this together. Not only does it bring into core the troubled life of a transgender female and the life long abuse but why the diagnosed of people on the spectrum is so important, This might have helped a troubled child not feel the only way out was alone in an hotel room.