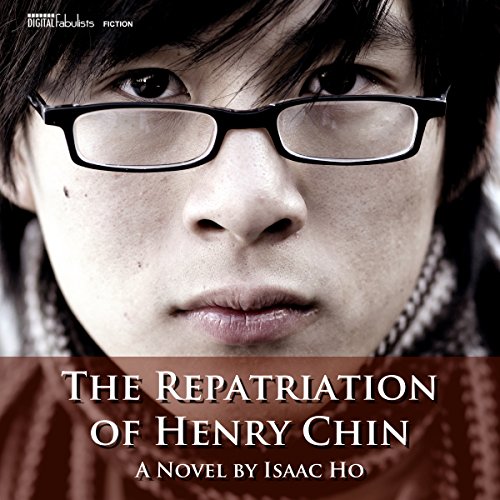 The Repatriation of Henry Chin

The Repatriation of Henry Chin

Amid the growing hostility between the United States and China, an executive order authorizes the creation of repatriation camps to safely secure Chinese Americans. Mild-mannered pharmacist Henry Chin goes on the run with his mixed-race teenage daughter and is relentlessly pursued by an ICE agent who will stop at nothing to capture these potential domestic terrorists.

What listeners say about The Repatriation of Henry Chin

I have decided not to finish this audiobook.
It initially appealed to me because the author had a Chinese sounding name, the illustration on the cover featured a character with Chinese features, and I have always been fascinated by issues of culture and belonging.

It started out well enough, with a disagreement between the Chinese and the Americans, which resulted in all Chinese and Chinese-Americans, living in the US, being rounded up and placed in internment camps "for their own safety". Henry Chin, a pharmacist with high level military training in his past, decides to go on the run with his daughter, rather than succumbing to this indignancy. Supported by his army mate Clive, the three of them plan to hide out in the mountains, then skip to Canada once the heat has died down.

What I had not anticipated was a full scale description of guerrilla warfare in the mountains and Chin's backstory, involving more violence in the Panama War. When government incompetence was added to the mix I decided that 75% was was a good enough trial for a book and things were only going to go downhill from there. I think this book was a bad choice for me and is more suited to a male reader with an army background.
The whole was definitely not helped by a monotone narrator.
1.5 stars.

Very topical political thriller, given the ongoing deportations of individuals from many countries by the US, including some who have spent their entire lives in the US. Chillingly believable. Not great fiction, but very engaging to listen to and read. Anthony Lee does excellent renditions of the characters with very divergent voices and personalities. Highly recommend the audible version!

Too Close For Comfort...

It was a fascinating and scary story to listen to especially in the political and global situations we are currently facing. It was a disturbing aspect, to say the least, that legally born US citizen could be perceived as threats to national security and become pawns in a political maneuver. It is a work of fantasy, but oh, so uncomfortably close to today's possible truth...
The writing style is a little different but in its slower pace well fits the ethnic group it portrays always methodical and pondering. The narration could have seemed also a little too monotonic but again I found it fitting to well represent the characters.
The ending was not my favorite part. It is hard to believe that a teenager could be turned into a hate and killing machine in such brief time. But maybe that is what I would like to think.
A book that will let you reflect on how quickly our real world can change.

I really enjoyed the book. It is a powerful reminder of what could happen to us—as Americans—when we let our fears get the best of us. It’s scary to imagine an assembly center in this day and age at the Rose Bowl in Pasadena. Or just the idea that you can even lock up an entire group of people for no other crime than being the “wrong” race or ethnicity.

In the book, we follow Henry Chin, who was an ex-military guy turned pharmacist. He’s been trying to live low and raise a hapa daughter after a war traumatic war experience in Panama. However, when they start rounding up Chinese Americans, he refuses to comply. He takes his daughter and together they make a run for Canada through the Angeles Crest mountains—with the help of Henry’s army buddy.

Please note that I received this title for free in exchange for an unbiased review .

Couldn't quite get in and connect with this one. I really wanted to. The plot and characters were interesting but I can't quite pick out where the disconnect came in.

The only thing that I would like to change in this book is the narration mood. The story deals with a very serious and strong issue, but the narrator failed to bring weight to it with his voice. The entire book felt like he was just reading it line by line and didn't really convey any of the emotions. Gravity of the situation, pangs of the characters weren't communicated to the listener in an effective way. I didn't "connect" with the story, even though I feel strongly about this topic. If the narration was a tad better, I would've absolutely loved this book.

This book is a riveting story, a tale of human endurance in the face of injustice. The Chinese Americans being subjected to force repatriation to China.
It is fiction but could easily come true in some form, it has happened in the past (Russian pograms against Russian Jews) (most of us have seen "Fiddler on the Roof").
A strong set of characters within an excellent plot.

An entertaining read/listen.
The narration was excellent and his voice well suited to the story,

I received a free copy of this audio book at my request, and I leave this honest review.

okay this book is perfect!!! I just don't know how to describe the fact that I couldn't stop the book The fliehr the anxiety that book gave me was undescribable!
if you love books that you can't stop reading or listening to this one is one of the best's

A terrifyingly possible future This is a MUST READ

THE REPATRIATION OF HENRY CHIN is terrifying in its possibility, especially with someone like Donald Trump in the Whitehouse. Plus, America has already forced one ethnic group into internment camps in the past. Don't think so? All a person needs to do is look back in American history to WWII when all Japanese Americans, despite where and when they were born, endured "...forced relocation and incarceration in camps in the western interior of the country of between 110,000 and 120,000 people of Japanese ancestry, most of whom lived on the Pacific coast. 62 percent of the internees were United States citizens. These actions were ordered by President Franklin D. Roosevelt shortly after Japan's attack on Pearl Harbor...Those who were as little as 1/16 Japanese and orphaned infants with "one drop of Japanese blood" were placed in internment camps."

So, if it has happened once, with a President who was much less volatile and elitist than the current President, why couldn't it happen again? I don't think it will take long for the current American racial tinderbox to explode. What that will look like? We have no idea, but Isaac Ho has obviously thought the issue through.

Tackling important issues such as racism and domestic terrorism, this audiobook should be required listening.

Henry Chin is an ordinary guy, in fact, his life would be considered boring by most people. He has Chinese blood, but he is an American and always has been. In fact, eight generations of his family have lived in the United States. Eight generations in America is more than many white people can claim.

With The United States and China on the brink of war, racial divides in America begin to focus on an "Us vs. Them" mentality. On one side of that divide is anyone with even a single drop of Chinese blood and on the other side is the rest of the American citizens. The President decides to place all Chinese people into camps "to keep them safe."

Henry Chin wants no part of those camps and he and his daughter break out in spectacular fashion.

One gung-ho Immigration Agent decides that Henry must be a terrorist and fixates on capturing the father/daughter team.

Meanwhile, Henry is struggling to bond with his teenage daughter and hiking through a National Park is probably not the best way to do it.

This audiobook takes off like a rocket and the story gets more and more tense until listeners are literally on the edge of their seats.

Narrator, Anthony Lee was a superb choice for this story. His pacing is 100% perfect and his ability to voice different characters with varying accents is unparalleled. It is easy for the listener to distinguish between characters since each voice is unique and distinctive.

I rate this audiobook as 5 out of 5 Stars ⭐⭐⭐⭐⭐ and I will be recommending it to my friends and followers.

To read more of my reviews, visit my blog at Amiesbookreviews dot wordpress dot com